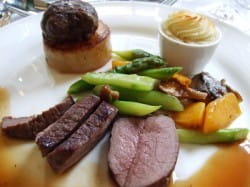 So is burgundy - and Beaujolais, which Jadot also bottles - still the ideal match for game it’s held up to be? Well, it depends on the burgundy. As last night’s dinner underlined it is one of the most infuriatingly inconsistent of wines, all too often failing to justify the high prices it commands. When it’s good it’s very, very good and when it’s not there are many other bottles one might reach for in its place. Here’s what I thought of the pairings last night:

Elderwood smoked breast of pheasant with apple and cherry chutney
LJ Clos de Loyse 2007, Château de Jacques (£11.99 independents) and LJ Beaujolais Villages Combes aux Jacques (£8.99 Waitrose, Tesco, Budgens, Booths)
A difficult dish both because of the markedly smoky character of the pheasant (it was also brined) and the accompanying sweet-sour flavours of the chutney. It was too similar to the Beaujolais Villages, the more obvious of the two pairings, stripping out its own cherry flavours. I preferred the attractively creamy Clos de Loyse, a single estate Chardonnay that could easily have been a Mâcon which picked up on the smokiness of the meat but to be honest I think an off-dry German Riesling would have been better.

Trio of venison: roasted faux fillet, shepherd’s pie and venison faggot served with fondant potato, seasonal vegetables and a red wine and thyme jus
LJ Moulin à Vent Grand Clos de Rochegrés 2002 (£22.99 independents) LJ Nuits-St-Georges 1er Cru Boudots 2000 (£42 independents)
One of those slightly convoluted cheffy dishes that make matching more difficult than it need be. I actually preferred the Moulin à Vent with its dark cherry flavours to the slightly thin Nuits-St-Georges which was possibly not showing at its best despite the fact that it stood up better to the strongly flavoured faggot which contained the deer heart and liver. (The fruitier Beaujolais went better with the filet and the shepherds pie.)

A more characterful burgundy like the 2001 LJ Beaune 1er Cru (much better value at £20.99) which was inexplicably paired with a cheese course that included a strong Epoisses would have performed better in my view but I’m not sure I wouldn’t have gone for a slightly younger, fruitier Pinot.

So maybe this new, more modern way of serving game calls for a less traditional, less mature style of wine? After all - apart from grouse and some of the rarer game birds - it’s no longer an expensive product that demands you dip into your cellar for your most venerable bottles.

More fruit-driven wines can also help with the berry-based compotes and sauces that are so often served with game and which can strip the fruit flavours from a lighter-bodied wine. Maybe the dinner would have been better accompanied by Chilean or New Zealand Pinot Noir? There’s food for thought . . . 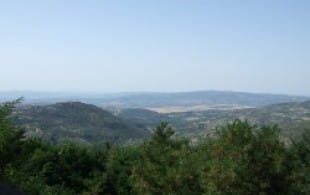 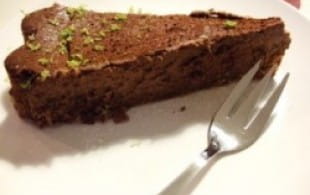 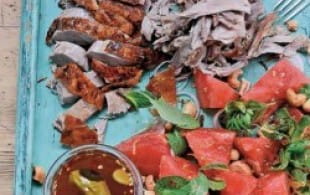