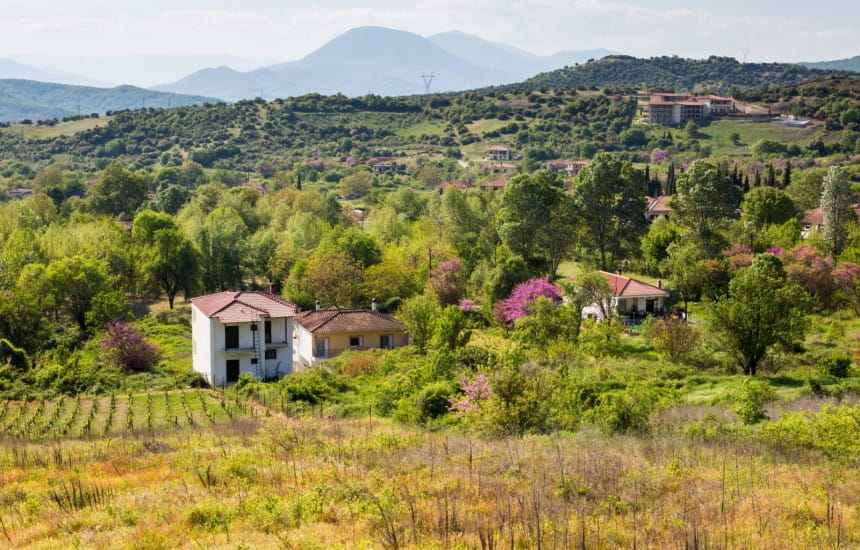 Greeks travel. A lot. Depending on who you ask, either Melbourne or Astoria (Queens, NYC) would make the third biggest Greek city – and London Zone 1 is probably not far behind. Greeks also tend to play well with others – these days it seems every other co-patriot of mine has a foreign spouse.

Greek wine, by contrast, is less mobile. Sure, by now most people know Assyrtiko, and Xinomavro is shyly making its first appearances in restaurant wine lists in London. But when it comes to matching it with food, by and large it seems locked in clichés, a last-minute afterthought for Greek and Greek-inspired recipes. This is a shame. The Greek wine of today has the quality and diversity to match a great range of world cuisines – and I am here to prove it to you. So, I invite you to follow me to a food trip around the world, with Greek wines in checked luggage.

10 pairings for Greek wines you probably haven't thought of

We’re starting off easy. This is not so much a cross-cultural pairing experiment, as a tip of the hat to our neighbours to the East, the “fainting Imam” being almost as common in Greece as it is in Turkey. Some like to pair it with heavy reds, but when done well (the fried aubergines having absorbed enough extra virgin olive oil, the onions caramelised in cumin and cinnamon) I prefer something sharp and refined to cut through the oiliness of the dish and not obscure the spices. A Naoussa Xinomavro, particularly of the traditional, rustic school such as Kir-Yianni’s Ramnista or Boutari’s Grande Reserve works particularly well.

If you like your wines softer, or you are preparing the dish with a Greek twist, which includes sprinkling feta on top, the newer, more fruit-driven style works well – Thymiopoulos’s take is particularly suitable.

A classic Levantine dish, this is often paired with Rhône-style blends from Lebanon in restaurants, a combination I find average as the reds are usually muscular and tend to overpower the gentle spices of the kibbeh. Instead, I propose a rare, and admittedly under-the-radar, Greek red variety. Vlachiko (pronounced VLA-hee-ko) is indigenous to Epirus, in the northwest of the country.

It is a cool-climate grape, which most would struggle to recognise as Greek and it is possibly the closest the country has to Burgundian Pinot Noir, though it is more herbal and less tannic. I hold that no winemaker has yet achieved the variety’s potential, but Metsovo-based Katogi Averoff is on to a good start with its Rossiu di Munte. The Glinavos estate blends it with another, even rarer, local variety called Bekari, for a result that is a tad fuller with more pronounced fruit. I would go for the former for more gently-spiced kibbeh, and for the latter with heavier versions.

This, I realise, will be controversial. Not simply because now we’re getting in true world fusion mode, but also because Retsina remains, unfairly, an object of derision for big parts of the population. I dare say though that the gentle aroma of pine resin not only works excellently with the demanding flavours of Chinese stir fries but is one of the very few wine pairings that truly add something – as opposed to the awkward co-existence that most others seem to achieve.

The new wave of quality Retsina allows for a lot happy experimentation. To get you started, I would go with a Roditis-based one, such as Tetramythos, for tofu and green bean stir fries. Seafood-based stir fries would benefit from the sharper, Assyrtiko-based Retsina elite of Tear of the Pine. For a quirky accompaniment to meat-based stir fries, try a rosé Retsina. Tear of the Pine stablemate Rosa is probably your best bet.

You can find this genius or madness, and I would agree with you either way. Sweet, perfumed dishes such as Fish Amok are notoriously difficult to pair with wine. Step in Nychteri, a high-alcohol wine from Santorini, made with overripe grapes, mostly or exclusively of the Assyrtiko variety. It has tropical fruit and honey notes on the nose and a full body that, to my palate at least, works remarkably well with the coconut milk-based gravy. If you’re worried about the salinity typically associated with Santorini, it’s hardly present; here Assyrtiko manifests itself in intensity, scaling up the gentle spices of the dish. The only downside is the price. This is an expensive wine to make, and the better examples, such as Sigalas’s, can get quite steep. Gavalas offers an alternative, which is more price-friendly, if not dramatically so. Hey, nobody said international summits come cheap. 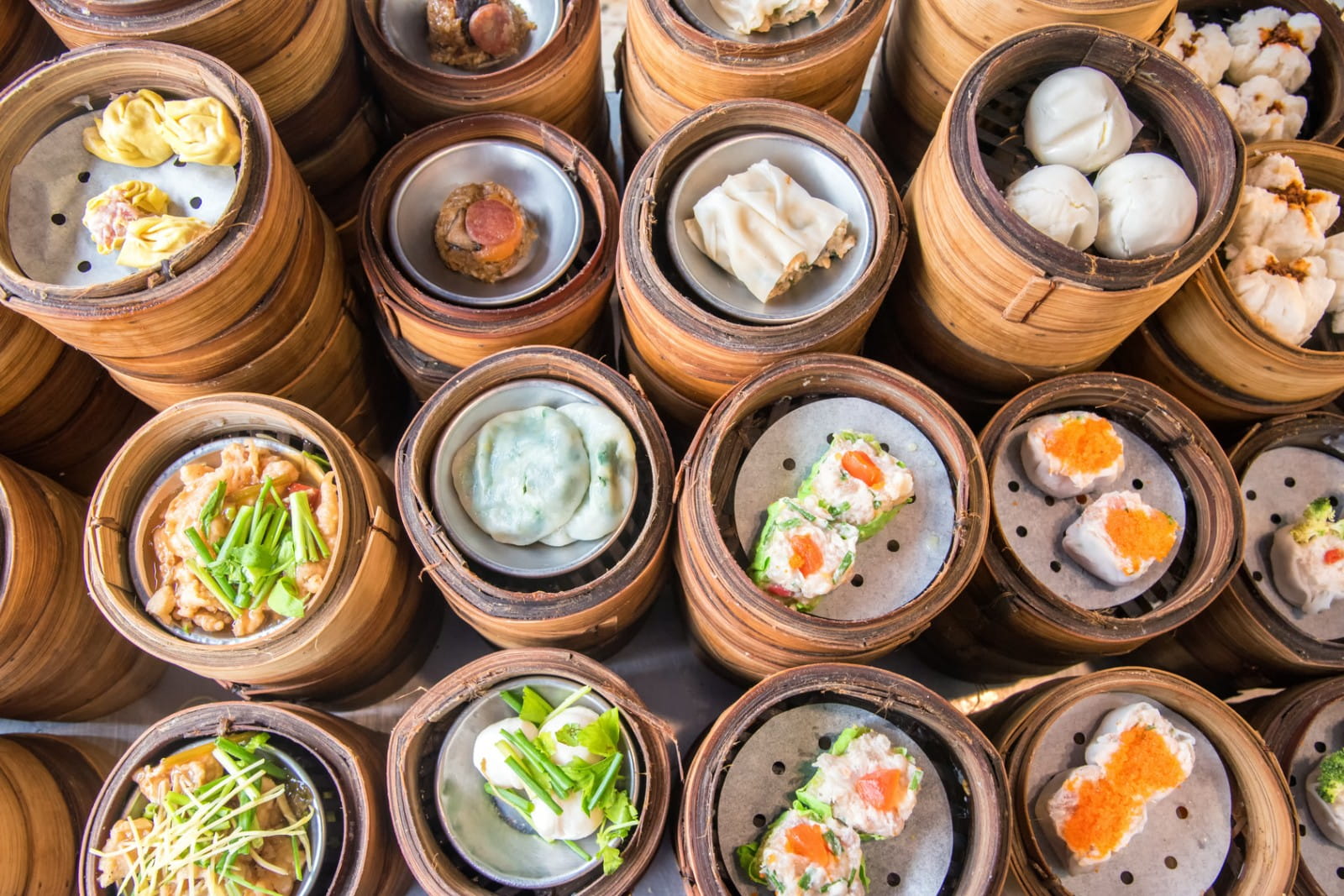 I realise that, as Dim Sum has Guangzhou origins, I am cheating a bit and putting China twice here. Hong Kongers would probably argue they have made it their own though, so there. I also realise that purists will say that nothing matches good tea for a proper Dim Sum and I don’t entirely disagree. If, however, you don’t consider it a proper brunch without a good drop, I put forward for your consideration the rising star of the Greek North, Malagousia, especially as represented by Estate Alpha and Malagousia pioneer Gerovassiliou. These elegantly perfumed, light-bodied whites are ideal accompaniments for the cornucopia of seafood and vegetable rolls and dumplings that make a good dim sum, but also work well with various dishes of noodles or rice, particularly lotus leaf. Just keep them away from the pork buns.

Sashimi and Nigiri with Robola

Since Japanese food became a thing in the west in the ‘80s, the whole coterie of premium whites has jostled for a place at the sushi bar. Far be it from me to deny the pleasures of a great white burgundy or the better Alsatians with sashimi…but are we sure they are not overpowering at times? My recommendation is for Cephalonia’s Robola, the Cinderella of the Greek vineyard. A delicate, almost shy, wine with citrus notes on the nose and just a hint of sweetness in the aftertaste, works excellently with the gentler sashimi and nigiri, such as prawn, eel, and sea bream. A rustic take is available from the island’s cooperative, while Gentilini is the leading producer to try. The latter also has a newer, experimental label, Wild Paths, which can take more robust fish such as mackerel and tuna.

That’s an easy one. Burgers, hot dogs, and steaks, served with rich sides and enjoyed in a relaxed manner, are naturally happy with any robust, generous red. I’m here to suggest that Greece, and northern Greece in particular, does those well too. So, if next time you have a barbeque you want to try something different, and also give a nod to the big Greek-American community, go for a wine which blends Greek varieties with international ones. Ktima Gerovassiliou, Ktima Biblia Chora, and Costa Lazaridis’s Amethystos are all good places to start.

Baja California’s favourite export is not an easy dish to match with wine. If you try to work to the fish, you’ll fall foul of the sour cream or mayo. If you try to match to the cream, you might overpower the fish - and then there is the lime in the salsa to consider. Enter Santorini native Aidani. Unfairly obscured by its more famous neighbour, it can give exciting wines when vinified well, as demonstrated by local elite Argyros and Sigalas. While lacking the saline majesty of Assyrtiko, these are lively, almost playful, wines, marrying citrus and tropical fruits on the nose with a long, almost sparkling, aftertaste – just the thing for the spicy hit of a good fish taco.

The story of drink pairing for fish’n’chips can be viewed as a metaphor for England’s increased cosmopolitanism, from ale, to Continental lager, to hoppy IPAs via way of the US. Meanwhile, gastropubs established its potential for wine matching, from Chablis to Cava. Fish’n’chips took it all in tolerance and good humour, maybe because it knows that it’s a bit of a hotchpotch combo itself. In a spirit of resistance to the times, which seem to call for a return to tinned green peas and bitter(ness), I urge you to continue exploring.

My Greek suggestion is Moschofilero, particularly from Mantineia in the Peloponnese. The strong lemon notes are a natural match for fried fish, while its intense acidity is just the thing for cutting through the fat. The finish is crisp, setting you up for the next mouthful. Mantineia is rather consistent across producers, but Tselepos is considered one of the masters. Nassiakos and Antonopoulos have two examples that you will find in many a taverna.

Wait, I hear you say. Is this some kind of trick? Are you going to claim some Greek heritage to Trebbiano to say it’s all Greek in the end, like a vinous version of the father in My Big Fat Greek Wedding? No people. I’m not talking about Vin Santo, but Vinsanto. It’s not that I don’t love the Tuscan version. I do, and I fully see the point of the very slight bitterness that Vin Santo has in its aftertaste when enjoyed as merenda, as I hear is still the case amongst Florentine old ladies. But I tend to have it as dessert – and I like my desserts property sweet. So, instead, I recommend you give a shot to cantucci with Vinsanto, the Santorini dessert wine made of the three white grapes of the island. Any of the usual suspects will do, but I am slightly partial to Argyros. Just make sure you stick to the less aged examples.

And that’s it! We are back to Greece! I’ll leave what to pair with moussaka to you ...

Wines which are not included in the links can be found on greeceandgrapes.com.

Peter Pharos likes drinking, talking and writing about the wines of Greece and Italy. He writes a bimonthly column for timatkin.com.