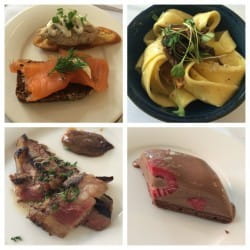 I was doing a series of workshops for the Irish wine distributor Febvre as part of their Febvreuary promotion (clever name!) three of which were held at Drury Buildings in Dublin’s city centre and involved the same menu.

Two courses in particular varied quite significantly - a dish of pappardelle with wild mushrooms where the amount of saucing ranged from quite dry (making the mushrooms more dominant and therefore more pinot-friendly) to creamy which kicked in better (in my view) with the De Bortoli chardonnay we were offering as an alternative.

The T Bone steak also tasted different each time. More or less charred, more or less rare and more or less fatty depending on which part of the cut you got. In session 3 it was significantly salter which make the Banfi chianti we were tasting with it even more appealing (though on balance it was most people’s favourite) The D’Arenberg Darry's Original (a GSM blend from 2010) worked best with the rarer slices and accompanying shallot which again differed in its degree of caramelisation and sweetness. (This by the way is no reflection on the kitchen - simply what you'd expect when you taste a dish on successive occasions.)

Even the wines tasted different, I thought - better on the second day (February 18th) than the first. Bottle variation (some were under cork)? From a different case? Atmospheric pressure? Who knows. Both days were root days as a matter of interest.

The net effect was the pairings varied each session. And so did the reactions of those present. Different people, different preferences.

Does this prove - as I’m sure some would argue - that food and wine matching is a pointless endeavour? You’d expect me to say this but absolutely not any more than it’s pointless putting a dish on the menu as it might not taste exactly the same the following day.

But it does perhaps make a case for keeping an eye on your food and wine pairings particularly if you change elements in a dish (such as the vegetables) or switch vintages. A new delivery of a wine might even taste different from the last few bottles of the previous one. Or, then again, it might not ....

Restaurateurs who offer food pairings I’d be interested to have your reactions to this. How you deal with the issues of vintage variation and consistency in the kitchen?

Good point about the condiments Miles. Ketchup in particular makes a HUGE amount of difference to a wine pairing and would definitely have steered that steak in the direction of the GSM.

A bit of variation in each serving of a particular dish is inevitable and usually won't cause a problem even though the wine and the dish will taste different.

What really might screw-up a match is adding a load of condiments, horseradish, English mustard, ketchup, chutney! These are big flavours and will really change the dish.

When we're doing our matches we always add the most likely accompaniments (ketchup to burger, apple sauce to roast pork) and it does make a big difference to the match-making.

There's not much you can do to allow for the amount of pepper or salt that someone might add though.

Thanks, Roger. Good to know you've come across the same problem (if it is a problem. I think we should accept some lack of consistency.). Interesting thought that where you taste the match also makes a difference. Certainly if event is wine-led food may well have to be tweaked. Food for thought!

You are quite right Fiona, the merest change in a recipe can cause a hiccup in the wine matching

Just as with making wine where the winemaker wants the same flavours from each bottle the same strict policies need to be kept to when serving a dish that has been specifically matched.

However there are huge variants, which I found out whilst promoting a food and wine matching event in Cape Town in January matched to 2 blind wines one from Australia and one from South Africa over 6 courses.

The dishes I had planned and was happy with in the UK did not show the same influences when cooked in Cape Town, due to numerous reasons, so we had to adapt the dishes so that they would blend in well with the wines.

You are quite right food and wine matching is very important, and normally in your own environment / kitchen using your normal ingredients works well, but just like a glass of wine may taste different in different environments and weather patterns food also can vary due to chef, source, environment.