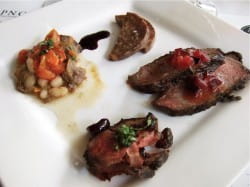 I was lucky to land on a subject so close to my heart as the seminars at the IPNC are often more technical in nature and this was apparently the first time they’d run one with food.

The tasting was based on four Pinots: a 2004 Domaine de L’Arlot Nuits-St-Georges 1er Cru Clos des Forêts, Pegasus Bay Prima Donna 2006 from Wairapa, New Zealand, a 2007 Dutton Goldfield Freestone Hill from the Russian River Valley in California and another 2007 Pinot Noir, the St Innocent from the Momtazi vineyard in the McMinnville AVA in Oregon’s Willamette Valley.

We tasted the wines blind, then, once their identity had been revealed, the winemakers talked about them. We were presented with four different dishes to try with them which had been created by local NW chefs from different cuts of lamb and a suggested list of ‘secondary’ ingredients. These were all cooked dishes but served at (warmish) room temperature.

So the stand-out pairing for me was the Pegasus Bay Pinot and the loin of lamb with its original and fresh-tasting salsa which proves that contrast is sometimes better when you’re pairing than attempting to mimic the flavours in the wine.

I was also struck by the fact that the age and style of the wines was as important as their provenance. As Dan Goldfield of Dutton Goldfield put it “If it’s wild mushroom season you’re not going to be thinking about the current vintage.”

Some of the most interesting insights and tips came from the chat around the pairings and observations from the moderators, Ray Isle of Food & Wine and wine educator Evan Goldstein. For example:

* As you are cooking have a glass of the wine you’re planning to drink beside you. First it makes the process of cooking far more fun but it allows you to make adjustments along the way. Everyone’s palate is different. (Evan Goldstein)

* At table don’t hit the seasoning without tasting the food first. Salt and pepper both accentuate alcohol. (EG)

* Your cooking medium is important. Serving food raw or steaming, boiling or poaching it is not going to have as much impact as grilling or smoking it. (EG)

* Adjust your pairing to the top note in a dish. Acidity is one of the great underrated characteristics of wine and food. (Ray Isle)

* Let one thing be the star. If that’s the wine serve it with something simple. (RI)

* One of the problems in restaurants is that young cooks tend not to drink wine - they drink cocktails and beer and so don’t develop a wine palate. (Cathy Whims)

* Chefs at winemakers dinners tend to dumb down the food (Brian O’Donnell of Belle Pente. That certainly wasn’t true of the lunch we had at his winery which was cooked by the team at Beaker and Flask).

* For winemakers, there may be something in the vineyard that gives you a clue to a pairing. For instance thyme which goes great with rabbit. (Dan Goldfield)

* Pairings are seasonal. If we were doing this tasting in February it would be a very different story. (Jason Stoller Smith)

A really fun session and, for those of you in the trade, a good model for conducting a food and wine tasting. 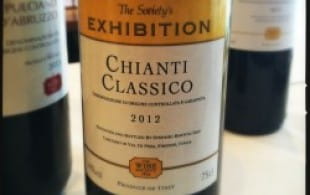 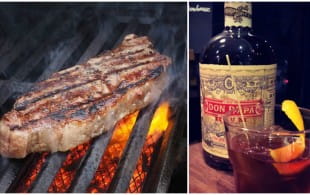 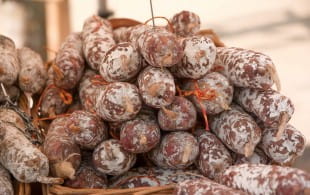