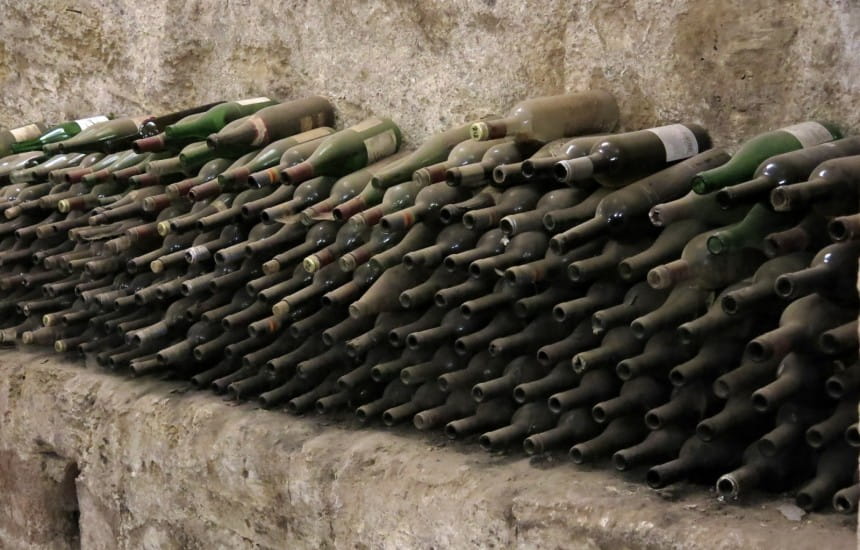 We were talking about this at dinner with friends and decided we should form a Bin End Club which would meet every couple of months and crack open some of these potential treasures. I should own up that the friends are chefs and restaurant owners who have acquired some pretty special bottles in their time. It wasn’t a case of plunging into a 20 year old bottle of Blossom Hill. But the rule was we would each bring standbys so we didn’t have to drink the undrinkable.

We held our inaugural dinner recently, kicking off with a bottle of 1995 Mumm Cordon Rouge which had survived remarkably well despite the shrunken cork, retaining its fizz and acquiring a delicate honeyed character. It even stood up to a very rich pheasant liver paté Stephen had rustled up from some birds he’d been prepping for a private client.

With the starter of beetroot risotto we cracked open a 2000 Adelaide Hills chardonnay and a 2001 white Chateau Musar. The former had rather lost its balance but the Musar, clearly designed for the long haul, was fantastic - slightly oxidised (as it would have been at the beginning of its life) but perfect with the earthy flavours of the beetroot.

Stephen then upped the ante with a bottle of 1986 Mouton Rothschild he’d been given by a customer - hardly a bin-end for a wine of that quality. Still intense, dark and velvety. The younger Majorcan wine we drank alongside it didn’t have a chance. That was with a simple rustic dish of pot roast partridge, lentils and cabbage - a good foil for an old red.

On a roll by this time we decided to crack a bottle of 1978 Paul Jaboulet Ainé Hermitage with the cheese - which Stephen had sensibly limited to two, a Gorwydd Caerphilly and a Tunworth, neither particularly wine-hostile. Again it was perfect: still full, savoury and gamey.

No dessert, just some boozy cherries in brandy, also a bin end of sorts, which Stephen had made six or seven years ago. We seem to have opened a bottle of Veuve Clicquot Rich Reserve at this point - at least I have a picture of it. I assume we drank it ….

You may of course be thinking - that’s all very well for them but I don’t have wines of this quality but the dinner would have been just as interesting if not quite as just as spectacular if we hadn’t. My experience is that when you dip into old wines there’s a 60% chance that the wine will be drinkable and often much better than you expect. I’ve tasted quite simple Australian reds at 7-8 years that have still been astonishingly vibrant and even generic village Chablis can age 15 years or more.

We plan to meet again in the new year when I’ll be the host. (The idea is that we take it in turns to host the event not so much for the cooking - we share the load - as the daunting amount of glasses to wash up afterwards) I quite fancy restricting it to ‘new world’ wines to see how they fare. As we did this time we’ll restrict the numbers to a maximum of 8 so that everyone gets a taste of each wine. In fact we were six which is even better.

If you set up your own Bin End Club do let me know and tell me what you eat and drink. If you can remember … ;-)

I still have three bottles of the Ch Musar 2001 white - it's nice, isn't it? Recently got given a dozen assorted old wines from my parents' rather random collection - some went down the sink but a thirteen year old Muscadet sur lie was remarkably fresh; delicious really!