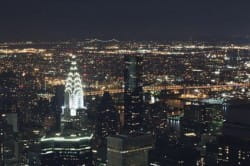 Going to New York for a dedicated restaurant visit is a high octane thrill that I don't think I'll ever tire of. A recent visit saw us rack up a bewildering (some would say indecent) number of venues and while on this occasion it was the food driving our agenda, finding anywhere which also has a wine list to quicken the pulse, adds another frisson of pleasure to lunch/dinner/third dinner.

On this visit I was trying to keep my wine instincts tamed (mainly due to a potentially devastating dent to the budget, which was already going to take a battering from food), yet when I glimpsed a list with interesting domaines and producers, the spirit of Bacchus came snarling and snapping out, and suddenly I was channelling the vinous gods. It would be the height of bad manners to ignore their call, right? 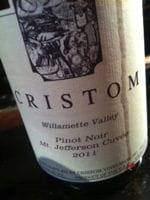 Managing to snag a seat at the bar at Gramercy Tavern on a busy Saturday lunchtime, the list of wines by the glass hooked me in. Seeing Oregon winery Cristom by the glass set the tone, their 'Mt. Jefferson Cuvée 2011' a great example of elegant, restrained American Pinot Noir, with more than a whiff of Burgundian style about it.

It's a tour de force of a list, put together by beverage director Juliette Pope, and they're also banging the drum for maligned wines such as Lambrusco, with Lambrusco 2009 'La Luna', from Cantine Ceci, currently being poured by the glass. Good baked Long Island clams here and Beausoleil oysters, on ice or roasted. A fantastic list for wine lovers.

Another restaurant in Danny Meyer's Union Square Hospitality Group, Maialino, just around the corner from Gramercy Tavern, has a 100% Italian list of some note, showcasing the great breadth and sometimes bewildering number of Italian varietals. 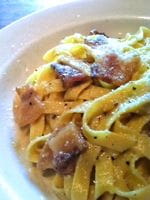 They are currently highlighting vintage Nebbiolo, pouring thirteen by the glass, with some 'big dog' names featuring. Francesco Rinaldi's Barolo 2007 'Brunate', Bartolo's Mascarello 2000, Borgogno's Barbaresco Riserva 1978, and Barbaresco 1988 from the ever reliable co-operative Produttori del Barbaresco — Italophiles will be delighted to explore the list here.

Champagne represents the only foray outside of Italy, and there are good growers listed here, including the 'Special Club' 2005 from Blanc de Blancs winemaking wizard Didier Gimonnet, of Pierre Gimonnet. Get me away from this list, it's dangerous to linger...

'I need a dollar, dollar, dollar is what I need...', and so we veer off into somewhere less 'spenny', a fantastic craft beer temple Merchants & Advocates of Great Beer, owned by beer geek Ted Kenny, tucked away on Orchard Street in the Lower East Side. A huge array of beer taps greets us, an obsessive list of craft beers chalked up on a huge board behind the bar. Lagunitas 'Brown Shugga' from Petaluma, Sonoma, kicks things off with deceptive, sneakily potent 9.9% ABV, and the list of over 600 bottled and canned beers from around the world is dizzying. You can fill up empty bottles and take these home with you too. A great spot if you're feeling the pull of the grain over the grape.

Hot spot of the moment Betony, with Executive Chef Bryce Shuman (formerly at three Michelin-starred Eleven Madison Park) at the helm, delivered a great wine experience, ably assisted by sommelier Cristina Lemos. I had noticed Muscadet playing a prominent role on a couple of lists, testament to the much improved wines of the region, and the opening wine by the glass was Muscadet Sèvre et Maine Sur Lie 2011, from Domaine de la Louvetrie, which made a fine palate-wakening first drop. It went well with a bar snack of 'lobster roll' too, a cheffy interpretation of this classic, sweet lobster meat encased in the most impossibly crisp and fine cigar shaped tubes: probably made out of brioche, but reimagined in a very Michelin way. 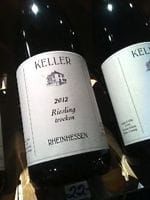 Riesling whizz kid Klaus-Peter Keller, making some of the best dry wines in Rheinhessen, features by the glass, as does iconic Rioja from La Rioja Alta and their Viña Ardanza Reserva 2004. Come here and sit at the bar, have the posh bar snacks, drink good wine and excellent cocktails — our negronis were pitch perfect.

More Muscadet and a very savvy, snappy list was waiting for us in the West Village at Chez Sardine, a real highlight of the trip that saw the most pristine nigiri served to us at the bar by a chap wearing a baseball bat emblazoned with You Mad, Bro'?'

It's a thrillingly tiny, modern take on a Japanese izakaya of just seven tables, a bar, and sushi counter. Sommelier and wine director Jen Sgobbo (ten years at Gramercy Tavern) has put together a list leaning more towards whites and lighter reds, complementing the fish-heavy menu. We start with an excellent sparkling Vouvray Brut from Domaine Bernard Fouquet. 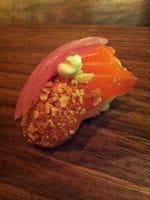 Miso-maple salmon head is the most startling dish, proudly occupying top billing on the list: try this with the dry Rheingau Riesling 'Rudesheimer' from Leitz, or the Beaujolais from Martine and Pierre Chermette - both coped well with the salmon.

Inventive nigiri and sushi such as salmon with pretzels and lime cream, unagi with tobiko and tempura, and scallop with jalapeño and lemon, ask tough questions for just one wine to sail through, but our Muscadet 'Côtes de Grandlieu' 2012, from Domaine Les Hautes Noëlles performed admirably. A very carefully considered list which will reward further visits.

Fatty 'Cue, the deliriously playful Malaysian/BBQ mash-up from the team behind Fatty Crab (gearing up to arrive in London next year), have a small, but well thought through list, while cocktails feature heavily too. We were enamoured with the cocktail 'Landing Strip', a potent combination of Campari, amaro nonino, bourbon, lemon and yuzu. Fatty Manhattan was a mixture of rye whiskey, vermouths, smoked cherry Coke, angostura bitters and lemon zest: heady, boozy, great fun. 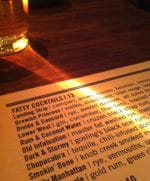 Whites by the glass feature aromatic varietals largely, Sauvignon Blanc/Riesling/Grüner Veltliner, alongside another Muscadet: Muscadet having something of an NYC 'moment', it seems.

One of the savviest shorter lists is at Locanda Verde in TriBeCa, Andrew Carmellini's bustling all-day Italian inspired dining spot, and a seat at the bar for their lamb meatball sliders is a favourite NYC moment. On this occasion a broad shouldered, fleshy Vietti Barbera by the glass was the sparring partner for the meatballs. The 100 bottle all-Italian list is put together by Josh Nadel, although they are quite happy to accommodate BYO for $35. With a list as good as this, it seems churlish to indulge the urge.

Finally a shout out to the finest barman we encountered, the brilliant Troy at Daniel Boulud's DBGB on Bowery, on the fringes of the Lower East Side. A hectic day of restaurant hits meant eating was nigh-on a physical impossibility, so we thought we'd drop in for a drink at the bar. One drink. Four hours later, a combination of Troy's drinks mixing skills, entrancing charisma, love of English football, and infectious love of the hospitality business, kept us there until appetites were miraculously revived again. He also had impeccable wine knowledge and gave us a taste of a Margaux which happened to be open. Superstar barman!

What to drink - and eat - where

Merchants and Advocates of Great Beer

Eat: Excellent jerky from small producers. Or Mission Chinese on the same street.

Eat: Pig's head terrine and charcuterie at the bar. 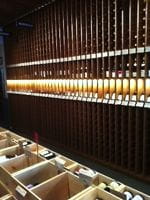 SOME OTHER WINE DESTINATIONS OF NOTE

Great source of German Riesling, Burgundy and Italy in particular.

Lower East Side wine shop with some gems to be discovered.

Collection of Riesling obsessive bars (self styled 'acid hounds') and a top restaurant at Hearth.

Zeren Wilson is a food and wine writer with a background in the wine trade. He publishes his own blog Bitten & Written - you can see some of the other places he took in during his NYC trip here.