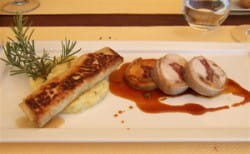 Where to eat in and around Agde

There was a time when the best place to eat in Agde or its seaside satellite Grau d'Agde which lie between Montpellier and Ste on the Languedoc coast was the Michelin-starred La Tamarissire. After that closed two to three years ago it left a bit of a gastronomic black hole but a couple of new places have sprung up which have serious gastronomic ambitions.

It has to be said that Le Table de Stephane, which was originally located in Cap d'Agde, has the most umpromising location of practically any restaurant I’ve been to. You reach it through a particularly down-at-heel industrial estate. It’s opposite a large cash and carry. While you’re sitting on the terrace outside gravel lorries and fork lift trucks trundle past. So why am I writing about it? Because the food is first rate, verging on Michelin one star standard.

Inside the restaurant is far smarter than you’d think from the outside. The service is slick and well regimented by what looks very much like Mme Stephane. When you sit down you get a selection of four Michelin-style amuse-bouches - a gorgeous, ice cold whipped mushroom mousse, a little disk of warm ‘cake’, a feuillet of duck (I think) and a caramelised tomato served like a toffee apple.

There were plenty of suitably seasonal choices on a sweltering hot day in July. I had a tuna tartare, roughly rather than finely diced with courgettes and beans and one of those normally superfluous drizzles that had a touch of sweetness that offset the dish nicely. My husband had baby courgettes and stuffed courgette flowers with a robust pistou sauce.

My main course (actually more like a starter) was a brik (Tunisian-style filo pastry triangle) stuffed with lightly spiced chopped cuttlefish and served with a glass of ice cold courgette cream, a delicious variation on the local squid-stuffed pastries, tieilles. Dunking forkfuls of the spicy pastry in the cool cream was just lovely.

Our other main course was a much more classic ballotine of rabbit with mushroom and truffle mash which went perfectly with the half bottle of classy Domaine de Clovallon Pinot Noir we’d ordered.

Being in a bit of a rush we didn’t have dessert but they looked imaginative and when we go back we’ll give them a try.

Three minor quibbles (apart from the view and the traffic). There was a slight repetition of ingredients you wouldn’t expect on such a short menu from a restaurant operating at this level. Courgettes and tuna appeared in both my courses. Secondly, and I admit this is a personal bugbear, with a menu this stylish and inventive why on earth have an old-fashioned cheese trolley? And I would have expected loose leaf verveine rather than a teabag.

But for the quality of food we had it was brilliant value at 52€ (£41) for two and we’ll certainly go back.

Two things immediately strike you about the K’Lamar. The bizarre name, presumably a tortured twist on calamar (squid). And the drop-dead gorgeous view across the Herault to the seaside resort of Grau d’Agde. The former says more about the place than the latter.

You’d love a restaurant like this, where you can sit right on the quay, to serve simply prepared seafood but it huffs and puffs and froths and squirts ingredients until its blue in the face. It’s not that the chef doesn’t have talent. He simply tries way too hard.

Perhaps we should have tried the menu of the day which during the week is a very reasonable 12.50€ for two courses including a salad and grilled seabass but we were intrigued after our experience at Le Table de Stephane to test the place out.

Black marks first off for not having any oysters. There have apparently been problems with the local oyster beds in the nearby Etang de Thau but they aren't affecting fully grown ones. However my husband was mollified by an impeccable plate of moules gratines (grilled mussels with garlic and breadcrumbs) which despite the inevitable drizzle of . . . we weren’t quite sure what . . . were perfectly cooked. I was also quite happy with my gazpacho although the speared deep-fried mussels that were laid on top of the odd asymmetric glass which lurched over the accompanying rocket like the leaning tower of Pisa didn’t really add a great deal.

Main courses were also slightly off-key. My husband had a veal shank topped with a bizarre disc of fried celeriac that made it look as if it was sprouting a mushroom. It wasn’t cooked quite long enough yet managed to be a bit too heavy for a fine day by the Med. I went for what I assumed to be their signature dish a plate of what turned out to be slightly chewy grilled squid with bouillabaisse froth, confit fennel and basil mash. Plus the inevitable squirts of balsamicky goo. Not bad - in fact the basil mash was great - but again just too complicated for its own good.

The bill for two of us with a 50cl bottle of ros, a half bottle of mineral water, an ‘amuse’ (salmon mousse topped with fennel chantilly) and a little shot of strawberry flavoured cream with our coffees was 72€ (£56). Not unreasonable, if not such good value as the Table de Stephane. But it’s worth going for the view alone and maybe the bouillabaisse which has to be be ordered 2-3 days in advance. Surely the chef can't add drizzles to that . . .

Where else to eat in the area:

Le Bistrot d’Alex, 5 avenue des Vendanges, 34510 Florensac. Tel: 04 67 77 03 05
Excellent simple bistro cooking in a well-designed restaurant attached to the the Florensac co-op. Ultra cheap wine, all available by the glass. Gets packed out, even out of season so be sure to book. See my review here.

Le Chateau du Port, 9, Quai de la Resistance Marseillan. Tel: 04 67 77 31 67 www.chateauduport.com
One of the many outposts of the Pourcel brothers’ empire (the Pourcels are the Gordon Ramsays of the Languedoc . . . ) Haven’t been for a while but the situation is charming overlooking the port and the food well above average for the area. Summer opening only.

Casa Pp, 29 rue Jean-Roger, 34300 Agde. Tel: 04 67 21 17 67
Housed in a rather gloomy cave-like room, down an alley off the main shopping street in Agde this doesn’t look promising but actually serves well-cooked, super-fresh seafood at a very reasonable price. .

Le Glacier, 6 av Victor Hugo, Marseillan 04 67 77 22 04
Not quite the restaurant it was in its heyday 10-15 years ago but under new owners who are obviously trying hard. Stick to the shellfish and simply grilled fish. Very good value set lunch at around 23€. - a good bet for a Sunday.