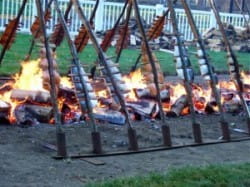 So the International Pinot Noir Celebration aka IPNC has pretty well been and gone apart from today’s brunch and it’s fair to say it’s very different from what I expected.

Firstly it’s HUGE. There are 600+ people here - mainly paying punters, mainly rich - or reasonably rich - Americans, mainly, it has to be said, seniors but, let’s face it, drinking Pinot is not a bad way to spend your retirement.

Then there are the local winery crowd - gratifyingly as you’d expect from Oregon: the winemakers with long hair, beards and crumpled shorts, the marketing team young, funky and tattooed. (Sooo many tattoos.) There are visiting winemakers: the French stick out a mile wandering around in a slightly disconsolate fashion as well they might. Oregon’s pinots are becoming more than a match for Burgundy.

Secondly it’s HOT. Anyone who thinks Oregon is a cool climate region should have sat at lunch in the direct sun yesterday. I think it reached 36C and the same is predicted for today. It feels much hotter than Washington too because it’s more humid. Cold though at night as I’ve mentioned.

Thirdly the food is amazing. Just incredible for these numbers although I have to admit the best meal we had was at Belle Pente for a group of, I’d say, around 50 cooked by a Portland restaurant called Beaker and Flask. The famous salmon bake (above) was great too though more for the brilliantly creative salads than the salmon which didn’t taste as much of smoke as I expected from being strapped over open coals (the salmon, not me, happily). Fantastic cheese too.

Fourth - it’s like the biggest, flashiest BYO ever. It’s hard to keep up with the wine never mind the pairings. At the big meals sommeliers or winemakers bring round a new bottle every 5 minutes or so, some seriously old vintages. Tragically I’ve lost track of many of them. To get to taste the latest you have to dump the last which given the quality of the wines really doesn’t seem right

Fifth it’s geeky. Particularly on the vineyard visit where the conversation is dotted with rootstock and clone numbers. They lost me, I confess

Sixth it’s challenging. Not because of the amount of alcohol and food consumed (though that too) but because it busts open your preconceptions about being a Pinot aficionado. At the blending session at Belle Pente where six tables of us had 3 different barrel samples to work with we all came up with a different blend. And when I judged them I picked out a completely different wine to the one our table had blended which tasted far too oaky. It’s renewed my respect for winemakers.

Even the seminar on food and wine matching, on which I’ll be reporting separately, made me think about wine pairing in a different way. I’ve come across so many unexpectedly good matches I wouldn’t have predicted, so many ingredients that make Pinot taste great.

And the wines? Wonderful. We’ve had the opportunity to taste pinots from all over the world but I have to say the Oregon pinots have really stood out for their sheer deliciousness. Not a very technical tasting term, I admit, but hey, this has been the most hedonistic, halcyon wine experience imaginable. Get in early if you want to go to the 25th IPNC next year (bookings for which open in January 2011 if I remember right)