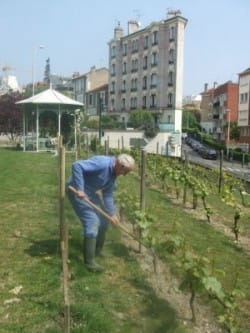 An admirable website, Matching Food and Wine, but a bit short on singalongs. Could we begin by joining in lustily, therefore, altogether now...

Horrible. Never mind, the point is the French fete nationale, the 14th of July, has just passed, with its big outdoor dances, and the annual Paris-Plages programme of pop-up beach entertainments is just starting. Both feature events themed on the old riverside dancehall /restaurants known as guinguettes. We’re talking accordions, waltzes, javas, paso dobles, the classic repertoire of the bal-musette culture of working class vieux Paris transposed to the banks of the Seine and the Marne, with food added.

Although the once great stock of guinguettes continues to decline, periodic revivals keep interest alive, and we’re in the middle of one now, thanks to characters like Melina Sadi, aka la Baronne, bal impresaria extraordinaire, and the excellent musette revival band Mimile et les Ramulots. And clich though it may be, the guinguette is a gastronomic institution worth reviving, like anything French and functional to do with catering.

The banks of the Marne east of Bastille and Bercy are prime guinguette territory. Although the earliest forerunners sprang up in Paris, they’d moved by the Golden Age of the late nineteenth/early twentieth centuries to the suburbs, originally to avoid the capital’s duty on alcohol.

This year the departement of the Val de Marne inaugurated a new guinguette festival based around the suburbs of Nogent-sur-Marne, Champigny and Joinville-le-Pont. The verdant banks of the river here are dotted with derelict ex- dancehalls, some in the lovely half-timbered neo-Normand style, while Joinville is still home to the great brick buildings which once housed the studios responsible for the cinematic mythologizing of the Golden Age guinguettes.

The last representatives of that age still function here, too, notably Chez Gegene, overpriced, culinarily to be given a wide berth, but still spectacular. Gegene is nowadays rivalled by the leading light from the neo-guinguette revival of the Nineties, the Guinguette de l’Isle du Martin- Pecheur. Here you find a curious mix of elderly waltzing couples, Come Dancing exhibitionists, retro-fashionistas, working class families, jazz fans, bikers and the occasional intrepid tourist.

But what about the food and wine? Well, as we just warbled so tunelessly, fish was traditionally the big attraction. Especially fried fish, the classic petite friture once caught prolifically on the doorsteps of the guinguettes; goujons (gurnard), and eperlans (smelt). Eperlans are still to be found, though the examples I tried were disappointingly dry and lacklustre, rather worse than the similarly degenerate British whitebait, and like them caught now in the North Sea and frozen.

The other great classics of the guinguette repertoire have all but disappeared. These were the robust stews made with eels, assorted river fish and wine, onions, and roux, the matelotes and gibelottes. “We’ve tried putting them on the menu” said Jean-Yves Dupin, founder of the Martin-Pecheur, “but people aren’t interested anymore.” The best that seems to be available now is moules frites, the occasional fricasse of eels, and a few OK brasserie dishes.

God that was even worse. The petit vin blanc of Jean Drejac’s famous music hall number still exists, so I went to meet its producers, the Confrerie de Vin Blanc de Nogent This is one of around thirty such associations leading another renaissance: that of wine production in the Ile de France, the region surrounding the capital.

On a Saturday morning I found Philippe Jouvin, a retired banker and current Grand Maitre of the confrerie, hoeing in the sunshine in the corner plot of the magnificent chateau grounds donated by the municipality. Up to the eighteenth century, Nogent was part of one of the largest vignobles in the country, producing the cheap white wine known as guinguet which probably gave the guinguettes their name. By the mid twentieth century, wine making here had almost died out. Then in the 1980s individuals began to replant plots of vines. The wine of Saint Maur des Fosses, celebrated in the Middle Ages, is now produced again from vines in a private garden, and wins prizes. Le petit vin blanc of Nogent is made from Chardonnay, Riesling and Pinot Blanc grapes vinified by confrere Stephane Pessin, a Burgundy man, currently accountant at the Intercontinetal Hotel in Paris. Frustratingly, I was unable to taste it. Last year’s vintage wasn’t bottled yet, and in any event, the wine of Nogent is a vin culturel, consumed only at special private events, and not for sale. For the same reason, the white wine washing down the North Sea friture at the Martin Pecheur, for example, is Muscadet.

This would not have bothered the great gastronome Curnonsky, who opined that fried goujons should only be eaten on the banks of the Seine, accompanied by Chablis and buttered bread. However, in view of the current mode for consuming local, it reinforces the necessity of reviving the whole gastronomy of the guinguettes, in the same way the musical side has been rejuvenated. This means local wines en pichet, a rediscovery of the matelote, and serious attention to sourcing and frying proper river fish. What could be more desirable? What are the French waiting for?

In anticipation, shall we try that first number again? You can keep your Bob Dylans and your Carla Sarkozys, this is what I call a lyric. Vive la friture! Vive le goujon!

For information on the guinguettes of the Val de Marne visit www.tourisme-valdemarne.com

Philip Sweeney is a food, travel and music writer. He has his own blog The Boulevardier.