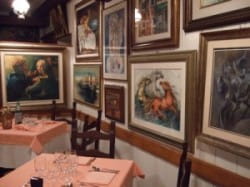 If you want to get away from your fellow tourists in Venice - and who doesn’t? - here are five very different restaurants to try. Three of them are on the Giudecca - one of the best places for avoiding the hoardes, especially at the weekend.

One (Dalla Marisa) is on the Cannaregio canal but so quirky that few tourist beat a path to its door and the other, Al Fontego dei Pescatori, central but newish ( a couple of years) under its current ownership so not listed by many of the guidebooks.

Altanella used to be former French president Francois Mitterand’s favourite Venice haunt and you can see why. It’s so discreet - down a tiny alleyway off the Giudecca, without any kind of sign over the restaurant - that it’s almost impossible to find. Inside the decor can’t have changed much in the past 40 years. Apart from the main dining room which is completely covered with paintings and the open terrace overlooking the Rio del Ponte Longo (lovely in good weather) it’s all dark pine and little booths. There’s a large TV in the corner by which the staff were transfixed during the Juve football match that was showing. After our main course was served they didn’t reappear for about 20 minutes.The food was mixed. The gnocchi, which was supposed to be a speciality was heavy and leaden with a pre-prepared (I suspect) sauce, the squid ink gnocchi not a lot better. My husband on the other hand had a nice fresh plate of boiled shrimp with garlic and parsley and one of our friends a glorious brick-brown bean soup, warming earthy and robust.

St Pierre came with rather a glutinous white wine sauce and the ubitiquous calves’ liver tasted more like lamb but the fritto misto (tiny shrimps and fish, squid and baby soles) was exemplary - a lovely light batter, fresh and sweet. House white is of the old-fashioned Venetian variety - almost medium dry but there’s a pleasant fresh cabernet franc by the carafe. Not much else in the way of wine though. This must be the shortest wine list in Venice.The pictures of Mitterand on the walls show him with dark hair which suggests the restaurant’s heyday was a good 40-50 years ago. Nevertheless it has a certain rustic charm. Go, I suggest, at lunchtime. Sit on the terrace if it’s fine. And order the fritto misto.

Service is langourous to a fault in this simple Giudecca-based trat but if you’re sitting on the quay in the sun overlooking the Zattere, who cares? The dishes are also carefully cooked and reassuringly authentic. Shrimps with polenta (14€) was perfectly cooked with tiny sweet shrimps and beautifully light and flavourful yellow polenta. Bigoli (thick wholewheat spaghetti-type noodles) in salsa was warming and rustic with a sweet-sour onion and anchovy sauce. Fritto misto (20€) was particularly authentic with plenty of small fish - at least 6 or 7 - as well as prawns and squid. A real mixed catch, beautifully fresh in a light batter. Mainly patronised by locals and the French who seem to have colonised the Giudecca. According to one website I looked at it’s the oldest inn on the island.

You need to be feeling robust to go to Dalla Marisa. They don’t speak English. You have to be there at 8pm prompt.(rather admirably there’s only one sitting) There’s no menu - or bill. House wine (no choice - it’s red) is plonked on the table. Marisa herself (a sturdy grandmother in her late 60s I would say) glowers at you out of the kitchen. But the food is sublime.If you manage to get a booking you walk into a wood panelled room which looks basically like a workman’s caf - which is essentially what it is.

The first two platters arrive - two different pastas (there’s no explanation of what they are) Ours seemed to be some loosely rolled cannelloni with homemade ricotto and spinach (fantastic, the best pasta I ate in Venice) and tagliatelle with duck sauce, made from the legs, I would guess, both made from superbly light, silky home-made pasta.Next two dishes of vegetables, an unadorned platter of simply boiled artichoke bases and a murky, flavoursome stew of enoki and oyster mushrooms. Then two plates of meat - some delicious little veal rolls (involtini) with a light spinach stuffing and some braised sliced duck breast. Altogether a ridiculous amount of food.

Dessert isn’t a big feature of Marisa meals but it was worth making room for it. On the night we were there it was a small bowl of mascarpone, mixed with a little liqueur (possibly grappa) and lightened with a whisked egg white and served with dry dipping biscuits. Delicious.. Non dessert-eaters are offered grappa.

The wine - just red not even white - chilled and slightly fizzy like a dry Lambrusco - comes in 1 litre carafes and is totally undistinguished.No bill, as I say. The amount we owed (€175 for 5 - a bargain 35€ each even though I suspect they charge tourists slightly more) was scribbled on the paper tablecloth.If you’re prepared to do away with the usual restaurant niceties - and even be treated like an undesirable necessity Dalla Marisa is a unique and rewarding experience.

Mistra has about the least conventional approach of any restaurant in Venice. You approach it through a boat yard and up a cast iron staircase.The view at the top over the lagoon is just breathtaking. Luckily they’d also seated us by the front window so we could look at it all through lunch. When we got to the table there were already several plates on it. A dish of salmon marinated with fennel, fresh anchovies with capers, tiny balls of mozzarella and sweet and sour fennel. Our waiter said he’d wait till we’d eaten our starters before taking our order (although there’s a menu outside they seem to ignore it).

A dish of whipped stockfish and some deep fried zucchini strips arrived (delicious together though the stockfish was slightly too creamy)Then the waiter rattled off a list of possibilities. Pasta with shrimps, prawn or lobster or a mixture of seafood. Whole baked fish in the oven or baked in salt. A mixed salad or a selection of veg. We chose a bit of each.Everything took a long time to arive but was worth the wait. Both the pastas one with scampi, one with lobster were terrific especially the lobster one which came with a huge claw. Although we’d only ordered a portion of each there was more than enough for four.

Our two seabass arrived with ceremony, one roast with accompanying vegetables (potatoes, peppers, aubergine and tomatoes) the other encased in a pile of salt which they dismantled at table, carefully cracking the salt crust, removing the skin and taking the fish carefully off the bone. Both were impeccably cooked and beautifully sweet.

Desserts - a decent creme brulee and some fresh pineapple were simple and good. With our coffee and infusions they brought free limoncellos.An eccentric place, with slow but charming service and deliciously simple food, obviously much loved by the locals who bring their families for Sunday lunch. Our bill for 4: came to 220€

NB Even though this seems out of the way make sure to book. The first time we tried to go there on a Sunday we couldn’t get in.

When Al Fontego dei Pescatori say their speciality is fish they mean it. The owner ‘Lolo’ ran a market stall in the Venetian fish market for 30 years and is still president of the Rialto market traders. Hence the emphasis on raw fish preparations such as ‘the clock’ - 12 different types of raw fish including scampi, prawn, seabass, sole and scallops and seabass tartare with raspberry -an odd but surprisingly successful combination (a tartare of tuna with strawberry was less good). We also tried a carpaccio of octopus with coriander which again was beautifully fresh but could have done with more coriander. (Lolo, who is passionate about his produce, serves his fish with just olive oil and balsamic vinegar - most diners, I suspect would welcome a squeeze of lemon).

Primi were good on the whole.. Fresh tagliolini with fresh tomato and raw scampi was a great dish - fresh and original, pancakes with prawns and artichokes sublimely rich and creamy, Tagliatelle with squid ink came with a rather heavy tomato sauce that disguished the squid ink flavour and accompanying scampi..though I have to say my husband loved it. Gnocchi were a little heavy and underseasoned. .The four of us shared a fritto misto which was excellent - fresh and crisp - one of the best we tasted.As elsewhere in Venice the wine list is good. We picked a delicious - Eleo Lison Tocai 2006 a lush, rich full bodied peachy white, so good that we had a second bottle.

This is a comparatively new restaurant (or new under the current ownership) where the welcome is warm and the prices fair (our bill for 4 came to 186€) Some of the combinations of fish and fruit are a bit off-key so stick to the less adventurous-sounding dishes. Lolo is passionate about his produce and you won’t get fish any fresher than this.*We didn’t get to it this time but on our last visit four years ago enjoyed Antice Stellato. Reviews indicate it’s still good.

And a couple of practical points: most restaurants, especially popular restaurants need to be booked ahead . And leave yourself plenty of time to get there. Some of them are hard to find. The normal way of giving an address in Venice is the district followed by a number but I’ve included the street too.