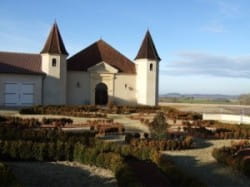 Last week I spent a couple of days in the Gers region in the south-west of France researching a piece on foie gras (for which you’ll have to wait a couple of months, I’m afraid, until it’s published in Decanter). But I made some other interesting discoveries.

First, it’s a beautiful part of the world. Once you’re past Auch (we were driving up from the Languedoc) it opens up into gloriously pretty countryside with rich, fertile fields and rolling hills. On a clear day, which we were lucky enough to experience along with two striking sunsets, you can see the Pyrenees on the horizon.

This is duck country (hence the foie gras), armagnac country and Tannat country. Its most prestigious appellations are the Tannat-based Madiran (picked out by Roger Cordet, author of The Wine Diet as being particularly high in polyphenols) and the obscurely named Pacherenc du Vic Bilh which like Jurancon is made from Gros and Petit Manseng (among other obscure grapes) and comes in dry and sweet versions. Conveniently Madiran is the perfect match for confit and Pacherenc for foie gras, two perfect terroir-based pairings (assuming, of course, that you eat foie gras)

We visited two wine producers at Maumusson: one on the recommendation of Vincent Labeyrie of Club Gascon - Chateau Laffitte-Teston - and the more famous Chateau Bouscass whose winemaker Alain Brumont put Madiran on the map. We thought the reds of this other Laffitte (which has two Fs and two Ts) remarkably good value, especially the 2005 Vielles Vignes which was rich, dark and damsony with that refreshingly bitter, tannic twist at the finish that makes Madiran such a good match with duck. It was an incredibly reasonable 9.35 euros a bottle from the cellar door.

We also bought some of their lighter, more fragrant Reflet du Terroir which was only 6.80 euros.At Bouscass we tasted our way through a couple of vintages of Bouscass and Montus, ending up with a few bottles of Chateau Bouscass Vieilles Vignes 2000 at 17.50 euros. I thought it was tasting wonderfully supple and sensual but Brumont’s daughter, who was dealing with visitors to the winery that afternoon, reckoned it still had a couple of years to go to reach its peak. (Bouscass is a blend of Tannat, Cabernet Sauvignon and Cabernet Franc with a tiny amount of Petit Courbu and Petit Manseng)

We also bought a few bottles of their least expensive sweet wine - the glorious jasmine and apricot-scented Vendemiaire 2000 (just 8.40 euros) which we discovered was another great match for a galette des rois.

Unfortunately we didn’t have time to go to Chateau Viella whose younger, even more floral and fruity 2005 Pacherenc we had tried and enjoyed at the foie gras producer. But it’s not far away - you could easily take that in too.The following morning we’d lined up a crash course in armagnac at Chateau de Laubade at Sorbets where we toured the distillery and tasted armagnacs going back to 1937. It’s a particularity of armagnac that the better bottles are released as single vintages rather than being blendied from components from several different years. (More about this later this week.)

My favourite was the ‘57, of which thre are unfortunately no bottles left but look out for the opulent vanilla-rich ‘75 if you get the chance. In the UK Laubade is imported by Berkmann and Eaux-de-Vie but you'll obviously get a better choice if you buy from the distillery which will also give you a chance to see the impressive 105 ha estate which has been carefully farmed according to the principles of lutte raisonne (the use of chemicals only when necessary) since the mid 70s. There’s a large flock of sheep which were picturesquely driven up the hill as if to order by the resident shepherd.

So there’s plenty for the food- and wine-lover do in Gascony but where to eat and stay? That’s more of a problem at this time of year when many hotels are closed and some restaurants only open at lunchtime. We were thus thwarted in our plan to visit the splendidly named Hotel de Bastard which apparently has an armagnac menu and ended up instead outside the Gers in a town called Grenade sur l’Adour (in another oddly named hotel called Pain Adour et Fantasie. The Adour is the river that runs through the heart of south west France and which has inspired Alain Ducasse’s latest restaurant at the St Regis in New York which opens later this month.)

The Pain Adour et Fantasie is particularly well situated with bedrooms and a terrace that overlooks the river and would be lovely, we thought, in summer. The rooms are also unusually reasonable and the food ambitious - the restaurant has a Michelin star. I’m not sure that the French obsession with sucr-sal (sweet and savoury flavours on the same plate) is entirely what’s wanted in this part of the world but two of the dishes including an unctuous winter soup of Jerusalem artichoke, turnip and celeriac. with deep fried snails stuffed with mint (a brilliant idea - much better than parsley) and fillet of venison with liquorice and a beetroot ravioli were terrific. And you may be relieved after a couple of days in the Gers to discover a confit-free zone . . .