The problem with Toulouse is that everything seems to focus round its big - and rather beautiful - squares which can get pretty crowded on a Saturday night, even in January but we were after something a bit more off the beaten track - and found it in two small family-run wine bars: Magnum and Le Tire Bouchon.

Le Tire Bouchon in Place Dupuy, which was recommended by French restaurant critic François Simon, was the first port of call. You honestly wouldn’t know anyone was eating there. It looks just like a wine shop then you peer in and see they’ve managed to cram 3 tables in among the jumble of boxes (and another three downstairs)

They only serve food at lunchtime which is cooked by the owner Philippe Lagarde's wife Laurence. Nothing is chalked up on a board - not even the prices but it’s 16€ for two courses, 21€ for three. A big plus is that it's easy to eat veggie without really trying (rare in France). I had an excellent butternut squash and coconut milk soup with coriander crème fraiche and homemade cheese ravioli while my husband stuck to the more conventionally south-west French options of piquillo peppers stuffed with confit duck and a homely veal stew. Puds were a classic chocolate mousse and a rather delicious fluffy cheesecake 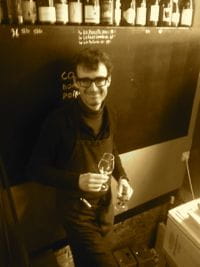 They don’t do much in the way of wines by the glass - you’d be better off buying one of the bottles from the huge selection on display which unusually features wines that are not French - though they will be at the very least organic and biodynamic. We tried a white grenache blend called Cool Moon from Les Enfants Sauvages which was a bit wild and funky for me (though better after decanting) and a lovely Gipskeuper German riesling (2009) from a biodynamic Wurttemberg producer called Beurer.

It was actually Philippe who suggested Magnum which is one of Toulouse’s oldest streets, rue Perchpinte - about 5 minutes walk from the Carmes metro stop. It’s more obviously a wine bar with a smaller selection of wines but a bigger menu of which the charcuterie served at almost fat-meltingly warm room temperature is a stand-out feature. (One customer went over just to sniff it) We also had a great umami-bomb of a carpaccio with slow-roasted tomatoes 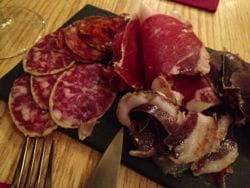 But the two stand-out dishes were again made by the owner Jérome Rey’s wife who comes from Réunion. Some local Toulouse sausage and prawn dumplings served with a spicy sweet chilli sauce (sounds dire, but it was brilliant with the 11% Thierry Puzelat gamay we were drinking as you can see from my match of the week) and some potato pancakes with lumpfish roe and a creamy lemon dressing I could have eaten twice over. (My Guardian colleague Marina O'Loughlin went a few days later on my recommendation and was raving about a cheese and ham brioche toastie with truffles. The menu obviously varies.) We spent about 70€ but could have spent a lot less.

These places won’t be for everyone. If you want more of a theatrical Toulouse scene and don’t like natural wines you may want to go for one of the better known names like Christian Constant’s Le Bibent. But if you want somewhere where you actually get served by the owner and experience a less touristy side of Toulouse they’re perfect.

PS judging by how full they were you’d do well to book - at Magnum you probably stand a better chance of getting a table if you eat early as the locals start to pour in from 8.30 onwards.

Where else to drink in Toulouse . . .

Hotel Albert 1er - we stayed in this solidly bourgeois French 3 star hotel in rue Rivals just off the main shopping street rue d'Alsace-Lorraine. Providing, somewhat surprisingly, an organic breakfast. Our very large double room cost 113€. Not flashy but well-run and welcoming - a hotel of character, not a boring modern chain.