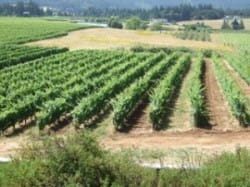 If I had to live anywhere in the US it would be Oregon. Admittedly the last couple of days have been unbelievably beautiful but I think it’s more that it’s comfortingly familiar - with green rolling hills and woods and flower-strewn hedgerows. Very much like Burgundy, the spiritual home of most Oregonian winemakers.

Oregon winemaking is green through and through. Apparently a third of the wineries have some kind of certification - most under the LIVE (Low Input Viticulture and Enology) program which covers both viticulture and wineries or the umbrella organisation OCSW (Oregon Certified Sustainable Wine) which seems to have more stringent requirements still. There’s a parallel movement protecting farmed salmon and their fisheries called Salmon Safe. I’m still trying to get my head round all these schemes.

On top of that some producers are organic and others biodynamic. The latter is the most controversial, as elsewhere with its proponents claiming they can see improved vitality and purity in their wines and others pointing out it doesn’t necessarily involve sustainable practice in the vineyards. But everyone I’ve spoken too - admittedly some of the best in the state - is thoughtful and philosophic about the way they’re making wine.

After an early visit to one of the Willamette Valley pioneers Bethel Heights (above) we had lunch today with the guys from Cristom (sustainable not organic or biodynamic) and two visiting winemakers from New Zealand who had also been at IPNC - Matthew Donaldson and Lynette Hudson from Pegasus Bay. Matthew reckons that Oregon is 10 years ahead of New Zealand in terms of sustainability which is saying something given that as from this year New Zealand wineries have to be sustainable if they want an export certificate.

It must also have been the only winery lunch I’ve been to which was cooked by a sales & marketing director - John D’Anna (right) who turns out to be quite some chef. We had panzanella with heirloom tomatoes, a hot smoked salmon and pepper salad on corn cakes (great with both the 2008 Cristom Pinot Gris and ’08 Germaine Vineyard Chardonnay), braised lamb with pomegranate and beans - a stellar match for winemaker Steve Doerner’s 2007 Sommers Reserve Pinot Noir and some hastily snatched local cheeses before we headed back to Portland for a final 24 hours checking out the restaurant and food truck scene. It was such a perfect winemaker’s lunch I’m trying to persuade John to share the recipes.

Apparently the 2007 Pinots got trashed in the US press but I'm loving the way they’re showing - really savoury, complex and meaty. Very much to the ‘old world’ palate - if there is such a thing these days.