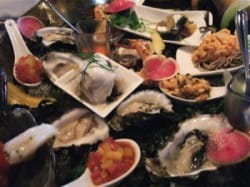 Eating out tips for Toronto

I really didn’t have much idea what to expect of Toronto. I knew it was ridiculously cold in winter and that it was hard to buy liquor (not a good combination) and that you could eat pretty good ethnic food, especially Japanese. But nothing quite prepared me for the range and scope of the city’s 5000+ restaurants. Here’s where I managed to get to in the 4 days I was there (thanks to taking in more than one venue at every possible opportunity)

High end dining
We were lucky enough to take in two of the city’s best restaurants, Canoe and Nota Bene. Canoe is literally high end - it’s on the 54th floor of the TD Bank tower, a stomach-churning 60 second ride in an elevator but the views over the city are just breathtaking. Like most Toronto restaurants it’s relaxed with great service. The star dish for me was the Raw Bar (right) which contained all sorts of original elements such as scallop ceviche, lobster salad and a selection of East and West coast oysters.

Try to take in both.

Museum and Gallery restaurants
All galleries and museums are paying more attention to their food offerings these days but few are as sophisticated or as well designed as Toronto’s. Top of the tree is C5 at the ROM (Royal Ontario Museum) which could easily be classified as a fine dining restaurant. We only sampled chef Ted Corrado’s main courses but I was impressed by a well-crafted combination of chilli-crusted venison tenderloin with sweet potato pure, roasted beets and feta cream.

At Jamie Kennedy at the Gardiner, Toronto’s ceramic museum, you can enjoy one of Toronto’s best known chef’s creative take on the Quebec speciality poutine. Normally a combination of chips, gravy and curd cheese, it is topped here with red wine braised beef brisket, Monforte dairy Cheddar and crme fraiche. They even have a wine pairing for chips (Henry of Pelham Cuve Catherine Brut), surely a first. In fact every dish on the menu, as is common in Toronto, is paired with an accompanying wine.

Frank at the AGO (Art Gallery of Ontario - above) is named after its world-famous architect Frank Gehry and occupies a beautiful open plan space in the building. The menu, devised by head chef Anne Yarymovich, is light and elegant, taking its clue from its surroundings. Our brunch featured a salad called 'Study in Reds' and a ‘Still life with pear, pancetta and fig’ but there were tempting egg dishes and sandwiches too

Ethnic
There are plenty of opportunities to eat ethnic in Toronto: it’s highest ranked restaurant, according to Zagat, is the Japanese Sushi Kaji but for an authentic Torontonian experience walk round the Kensington Market and nearby Chinatown areas with all their small ethnic shops and restaurants. We had some excellent dim sum at Bright Pearl which specialises in seafood

Fast food
The other great market is the St Lawrence Market in the heart of the downtown area where you can eat the famous Peameal Bacon sandwich, much beloved by visiting celebrities according to purveyors Carousel Bakery. It’s a sweet-cured bacon, coated in cornmeal and served with honey mustard. Wash it down with apple juice or Coke.

Although not a Toronto institution you should also sample a regular poutine (rather than the upmarket one at Jamie Kennedy’s above). Smoke’s Poutinerie at 218 Adelaide Street is reputed to have the best selection

Brunch
If you want to get away from tourist hotspots head to the Niagara Street Caf whose cooking is based on naturally reared and organic produce. Take the edge off your hunger with a plate of potato rosti with bacon jam and crme fraiche or some apple raisin bread and butter. Follow with Welsh rarebit, biscuits Benedict, omelette of the day (pickled aubergine the day I was there) or a Breakfast Tartlette of scrambled eggs, chorizo, caramelised onions and goats cheese.

Chocolate nirvana
For the best hot chocolate in town, some classily presented chocolate gifts and a chance to see chocolate actually being made head for SOMA Chocolate in the Distillery district.

Cheese heaven
And while you’re in the area you might also want to visit Taste of Quebec which stocks cheese and other products from the region. If you’re really dedicated to the cause take a cab out the quirky Cheese Boutique where you can try European cheeses you can’t even find in most European cheese shops.

For beer fans
Toronto’s take on cuisine a la bire beerbistro actually outclasses some of the restaurants I’ve been to in Belgium and Northern France. Even if you don’t have time to eat there drop by to try the excellent collection of Canadian beers they have on tap. For a fuller report see here.

Booklovers
There’s a great cookbook shop at 850 yonge street called the Cookbook Store with practically every good food book you can imagine (including mine which is why I’m recommending it with such enthusiasm!)