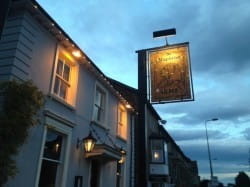 Not having been to the city recently I asked my Twitter followers for their views and these are the ones I settled on - Sojo for a Friday night Chinese, Gee’s for brunch, a gastropub The Magdalen Arms for a slap-up Saturday night dinner and an Oxford institution, The Cherwell Boathouse for Sunday lunch. There are other options which I’ve highlighted but I was more than happy with my choices. Note, you’ll need to book as all except Gee’s were busy, though maybe they get booked in the evening too.

With its wood-panelled walls Sojo looks much more like a cool East End restaurant than a typical Chinese. When we arrived at 7.15 it was already rammed. The menu is ridiculously long so I was glad I’d consulted my Twitter followers who had recommended it about what to eat and checked out this review from the Telegraph's Matthew Norman. 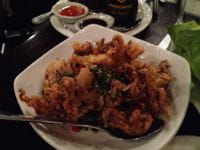 Dim sum were a little gluey - and for purists it was the wrong time of day to eat them - so I’d skip those and concentrate on the home-cooked dishes which are their speciality. That said a super-crunchy salt and pepper squid is terrific, possibly the best I’ve had. But the star of the show was a massive sticky Shanghai braised sweet soy pork hock, easily enough for three, which is pulled apart like crispy duck at the table.

We ordered sides of jasmine rice and Chinese cabbage and mushrooms (particularly delicious) with it but could also have gone for the much praised green beans.

The only disappointing dishes were the lettuce cups (underseasoned, unusually for this joint with too many veg and not enough chicken) and a rather drab spicy chicken salad which arrived - presumably having been forgotten earlier - with the pork. Read Matthew’s review for other recommendations. The next table was having (I think) Ma Po Tofu which looked really good.

What I drank: I’d forgotten how tasteless Tsingtao beer is (don’t bother) but the house rosé is fine and you might even pitch into a red with the pork.

Alternatives: My Sichuan or, if you fancy a Thai, Chiang Mai Kitchen or Oli’s Thai 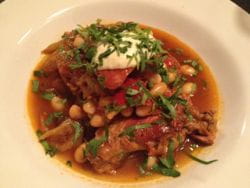 This warm, welcoming gastropub was recommended to me more often than anywhere else and I could see why. It has one of those menus where everything seems tempting - you really need a large group to do it justice.

The table next door was feasting on a slow-cooked lamb shoulder with gratin dauphinoise and picked red cabbage “for four or five to share” Other dishes such as ‘two way mallard with faggots, mashed potato and savoy cabbage” (sold out to the anguish of one customer who arrived later than we did) were for two.

I went for the daily special of rabbit with chorizo, chickpeas and aioli (above), a hearty plateful that would have been welcome on a cold winter’s night while my daughter had a perfectly cooked bavette steak with blue cheese butter that she was wisely discouraged from having medium-rare.

She also had rabbit for a starter in the form of rillettes - a good use of leftovers I suspect - while I had the best twice baked cheese soufflé I’ve ever eaten made from the local Oxford Blue - light as air and served with a nicely contrasting crisp pear and walnut salad.

Only the desserts - an autumn fruit crumble that looked as if it had been topped with cornflakes and a perfectly decent though not wildly exciting pear and almond tart failed to reach the heights of the starters and main courses. The wine list, while not in the Cherwell Boathouse league (below) is interesting with plenty of options by the glass. I had a glass of Marques de Reinosa white rioja and a Vinho de Palestra Douro red, both well priced at £4.35 and £5.20 respectively.

As the evening wore on it got more crowded and noisier and with a young, studenty crowd It wouldn’t be the place for a romantic evening but it’s perfect, as I say, for a group of friends.

NB It's slightly out of the centre. Unless you’re feeling energetic you may need a taxi. 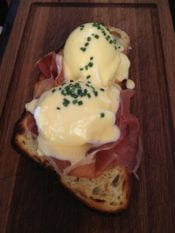 We could have stayed in our hotel (The Old Bank) for breakfast on Saturday but decided to walk over to its sister restaurant Gee’s for brunch a mile or so away. It’s housed in a pretty conservatory with plenty of squishy banquettes to loll on. And they serve you properly squeezed orange juice ‘with bits’ before you’ve even got round to looking at the menu.

Eggs benedict seemed the order of the day (Oxford seems to have a thing about it) and as it’s my favourite brunch dish I don’t know why I didn’t order it instead of going for a full English breakfast pizzeta which was clever but not nearly as satisfying. (My daughter wisely did, hence the photo.)

We then ordered a banana bread and mascarpone we didn’t really need and didn’t manage to finish. It would have been better served warm as I half expected. Still, a lovely place to have breakfast and you can then walk back to the city centre to work it off which will make you feel virtuous. 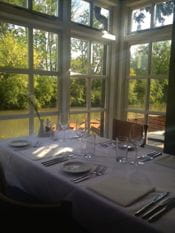 I was a bit hesitant about going to The Cherwell Boathouse as it’s been going for ever but recent reports suggested standards hadn’t slipped. Sunday lunch on a sunny late September day was probably a good plan enabling us to sit in the window watching the punters (people punting, not our fellow customers).

The food isn’t amazing but it’s generous and good enough. In fact my daughter who isn’t half as picky as I am thought it was terrific. We both had roasts - in her case roast lamb, in mine (slightly soggy) pork belly with apple sauce and loads of veg including some decent roast potatoes then shared a sticky toffee pudding which was brilliant - light and not too sweet. 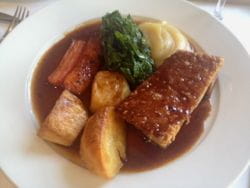 Starters (heritage tomatoes and mozzarella with a crisp-fried slice of pancetta in her case, a rather overworked salade nicoise with seared tuna and soft boiled quails’ eggs in mine) weren’t wonderful but frankly I didn’t mind. For the point of the place is not the food but the view and the wine - one of the best, most reasonably priced lists in the country.

Being the only one drinking I didn’t do it justice having a glass of Gusbourne brut to start with and a glass of authentic old-fashioned Beaujolais from Domaine A. Michaud. I should probably have gone for a half bottle or, even better a full one and taken the rest home.

Note: also out of the centre but taxis are comparatively cheap.

Other options: The Old Parsonage