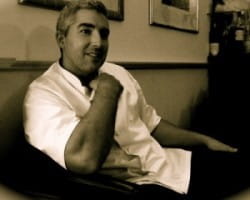 A return visit to Le Champignon Sauvage in Cheltenham last week underlined why David-Everitt Mathias is considered one of the 10 best chefs in the country according to the latest Good Food Guide.

Here's the review I wrote five years ago. Scroll down to find out what we ate this time.

"He’s not in the world’s top 100 restaurants. You’ll rarely see him in a glossy magazine and never in a TV studio. In fact you quite possibly have never heard of him but he’s probably more highly regarded by his fellow chefs than anyone else cooking in Britain today

I’ve been eating at David Everitt-Mathias’ two Michelin-starred restaurant Le Champignon Sauvage for some 15 years (he’s been open for 22) and can honestly say I’ve never had a disappointing meal there. There are dishes, admittedly, that haven’t particularly appealed though I can count them on the fingers of one hand - but that’s inevitable given the cutting edge nature of his cuisine and they’re always outweighed by dishes that are quite simply stunning.

His imagination seems boundless; his intuition as to what unlikely ingredients will complement each other, uncanny. He treats offal like a luxury ingredient, turns vegetables into desserts and wild plants into sophisticated sauces and ice-creams. He doesn’t strive for effect, just the ultimate extraction of flavour. Eating there is still a conventional restaurant experience not an edible performance as is the case with contemporaries like Ferran Adria and Heston Blumenthal. (That’s not to detract from what they do - it’s just to Everitt-Mathias’s credit that he manages to make such an impact on the plate without any special effects.)

Because he knows us he sends dishes out that are still in the process of development (and no, we don’t dine free - we pay our way. Everitt-Mathias doesn’t believe in schmoozing the press!)

We kicked off our dinner last week with a trio of intensely umami dishes, a register with which Everitt-Mathias clearly feels comfortable. There was a simple but perfect mini-risotto generously topped with shavings of Umbrian summer truffles then two surf’n’turf dishes (a favourite Everitt-Mathias combination): Shetland scallops with carpaccio of pigs head and pickled pear pure (the sweet caramelised scallops were simply wonderful with the slightly sticky, gelatinous texture of the pork, crisp bits of crackling and soft, sweet pear) and deeply savoury crayfish with cocks’ combs and seagrass (I think) accompanied by a warm, umami-rich pea pure and crayfish jelly. All three dishes went well with our muscular 2006 Domaine du Pre Caboche white Chateauneuf-du-Pape (though I have to say that a full-bodied vintage champagne like Krug would have been even better. Dream on . . .)

The next course - a very zesty, Asian-style dish of halibut with dandelion and chickweed with a Yuzu (a Japanese citrus fruit that tastes a bit like grapefruit) and coconut broth, was delicious but really threw our wine. I’m still struggling to think what would have matched it - a quality Torrontes or a German or Austrian riesling perhaps but I think they’d have to offer a specific by the glass pairing.

We were back in umami territory with rump of Cinderford lamb with wild garlic gnocchi, wild garlic, roasted garlic cream and early Scots girolles which was a perfect match for a half bottle of 2004 Clos du Val Cabernet Sauvignon - the roasted wild garlic stalks linking to the very subtle herbaceous notes in the wine.
I suspect Everitt-Mathias puts that on the menu because he has to have a relatively conventional meat course: it didn’t seem to me his heart was in it in quite the same ways as the other dishes. Or that he’s more interested in seafood than meat these days.

Next three very different desserts - Everitt-Mathias is surprisingly also a highly talented pastry chef, as you can see from his book Dessert. The first - the only dish of the dinner that didn’t really do it for me - was a Guinness bread porridge with buttermilk mousse which was a bit heavy. I felt it needed to be boozier or have a good slug of sweet sherry with it.

The next course though was a wonderfully creative reinterpretation of lemon meringue pie (on p. 66 of the book*) served with a sharp, refreshing sorrel ice cream, lemon jelly and cardamom yoghurt and the final dish - apart from some sublime petits fours - quite the best chocolate tart I’ve ever eaten: a bitter chocolate and black olive tart with fennel ice-cream (p42*), a inspired riff on a chocolate fondant pudding (though again probably a nightmare for wine. Maybe a Chartreuse . . . )

This really is the most remarkable food - not only inventive but delicious, amply paying witness to the hours of dedicated work Everitt-Mathias puts in in the kitchen, and, I strongly suspect, out of it. This is a home-grown chef we can be proud of: one at the height of his powers, cooking 3 Michelin star standard food (although he only has two) that practically everyone can afford. His set menu starts at just £25 for two courses. Do go." 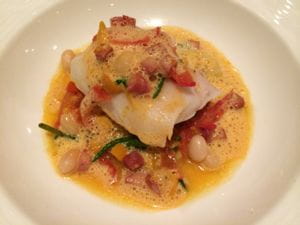 Although we've eaten David's food a number of times since this was written, most recently during an amazing pop-up during Bristol's Food Connections festival back in May it just seems to get better and better. For Tuesday's dinner we decided to road-test the set-price menu which at £26 for two courses is barely more expensive than it was back in 2009.

Mains could justify that price on their own. A fabulous saffron-spiked fish stew of ling, with potatoes, coco beans and chorizo foam (right) made you wonder why chefs bother with pricier fish while a deeply savoury plate of Cinderford lamb fillet, boulangère of braised shoulder and roasted onion and rosemary purée seemed to have been designed to set off the sweetly mellow 2002 Château Cap de Faugères Bordeaux we ordered - extraordinary value for £40.

The dessert of the day - a pistachio parfait with poached damsons and damson sorbet - was worthy of the full price à la carte and David must be the only Michelin-starred chef not to impose a supplement for cheese.

Only the starters - a velvety butternut squash soup with fried spätzle and a venison cannelloni with celeriac cream, ground elder and pickled pear that David told us afterwards is made with venison offcuts - explained how he manages to keep the prices at this level but the attention and skill that went into them were the same as the rest of the menu. 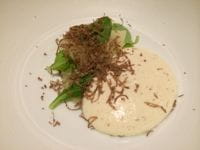 He also sent out a couple of new dishes to try as if to say "just look what you're missing": some intensely umami dived scallops with roasted peanuts, charred little gems and 'cured jowl' (a scattering of crisp pork crumbs) and possibly the best ever potato dish: smoked potatoes, warmed through with ham fat and topped with grated summer truffles and potato truffle foam. (Pausing while I remember this . . . ) I'm sorry, you just can't write about Le Champignon Sauvage - or at least I can't - without gushing.

So, what can I say? Go if you haven't been before. If you have, go again. And again. As the Good Food Guide says, it's one of the best restaurants in the country.