What do these have in common? They’re central which certainly helps - it’s nice not to have to trek over to Hackney for once, both have a good atmosphere and friendly service but above all they serve the kind of food we all - well, maybe I’m speaking for myself - want to eat.

First of all, Parsons, which is freshest in my mind as I ate there this week. It’s been opened by the team behind 10 cases bistrot a vin opposite (also congenial) and occupies a small white tiled room that looks as if it could have been a fishmonger in a former life. In fact, I’m told, it was once a restaurant called Diana’s Diner) The slight downside to the size is that the tables are decidedly cramped which adds extra impetus to pacing yourself and ordering two dishes at a time..

The menu is based on fish - some of which are changing daily specials though I’m thankful that the potted shrimp croquettes (is this the best incarnation yet of croquetas?) and sea trout tartare with Bloody Mary jelly (equally clever) are both on the regular menu as is the lobster mash though that had proved so popular the night we were there that it had sold out.

Other highlights were the impressively tender octopus with pork fat potatoes (basically roasties. What’s not to like?) and some fat juicy grilled prawns off the specials board. The fish pie was sound if not stellar - maybe we were just feeling miffed about the mash.

The only dish that didn’t quite work, as Fay Maschler of the Evening Standard points out, was the crab pissaladière but I liked the idea so much I felt I had to give it a go. I agree it's not quite right. The base, while authentic, is a bit heavy, it's not crabby or oniony enough and there are some weird very un-Parsons like blobs of what tasted a bit like tarragon mayo all over it. Have a second portion of the croquettes instead.

As you’d expect from its parentage the wine list is impressive, particularly for such a small place though we in fact drank quite modestly (a carafe of Xarel-lo - the grape that’s used to make Cava). And then had to have two more glasses. We should have ordered a bottle.

As is the way with small plates you can run up quite a bill (in our case £108.56 for two) but you don’t have to eat as much as we did - though I warn you you probably will.

Rochelle Canteen at the ICA 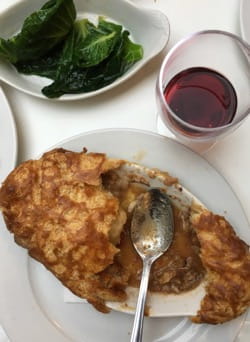 At Rochelle Canteen’s it’s the pies that have attracted the attention - the rabbit and bacon pie in particular .Why is it so good? The nostalgia of the concept, the smoky flavour of the bacon which tastes as if it’s been hacked from a flitch that’s been hanging in an outhouse for weeks, the crisp, crunchy texture of the suet crust pastry and just the right proportion of filling to lid. It’s a madly generous portion for one

Margot Henderson cooks the sort of big-flavoured food I yearn for (her Turkish coffee cake from her wonderful cookery book You’re all Invited is one of my dessert staples).

We also tucked into a perfect plate of fresh radishes with smoked cods roe, fluffy salted hake croquettes with a punchy saffron mayonnaise, a simply marvellous Jerusalem artichoke, salsify and watercress salad (the perfect winter salad) and braised fennel sausages and polenta. No surprise then that we didn’t have room for a pud though we were sorely tempted by both the quince, meringue and cream and the pear and almond tart.

The white-painted room verges on the austere - very reminiscent of St John (same design team I wonder?). A lovely light for instagramming I confess I immediately thought (shame on me) followed swiftly by how perfectly it fits into the ICA.

The wine list oddly isn’t anything to write home about - or wasn’t when I went in November. Quite short, not much choice by the glass, just the house wine. They could expand that a bit given a lot of people will be lunching there midweek and might not want to sink a whole bottle. On the other hand you might. Go anyway …