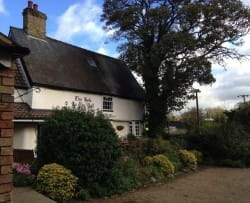 The Hole in the Wall, Little Wilbraham: not your average country pub

The Hole in the Wall at Little Wilbraham near Cambridge sounded like the sort of twee country pub that I hate. Discovering it had a celebrity chef and a tasting menu made it appeal even less but on my visit last week I was bowled over

The pub is run by 2010 Masterchef finalist Alex Rushmer and his business partner Ben Maude who have been friends since they met at Cambridge. Both are self-taught but produce beautifully nuanced light, elegant food in a country pub with a decor that harks back to the ‘70s. (The swirly carpet has to be seen to be believed.) It’s as if Noma had pitched up in the Essex stockbroker belt

As we sat down we wished we’d opted for the à la carte which looked comfortingly familiar. Airy pies and triple-cooked chips wafted past. And then the first dish arrived. A velvety curried parsnip soup with some warm chunky rillettes and matchsticks of apple tumbling off a couple of fingers of toast. The perfect start on a chilly spring evening. The accompanying Harviestoun Bitter & Twisted blonde ale was a bold and clever match. 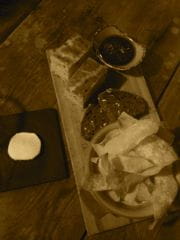 Next up a simply gorgeous bread board - two hefty chunks of homemade tomato and herb foccacia, black treacle bread, a vivid wild garlic pesto and the best imaginable home-made crisps. It was as much as we could do not to scoff the lot

There was applewood-smoked mackerel and broccoli from the allotment, with a smooth velvety broccoli purée offsetting the rich oily mackerel. (Apparently they smoke it just before service.) A tricky dish for wine, cleverly paired with a 2012 Kurt Angerer, "Kies" Grûner Veltliner.

Next a fantastic cauliflower dish roast, raw and puréed with a curried peanut granola and a sweet and sour raisin dressing. Sounds a bit of a car crash but it was so well judged - the sweetness of the raisins playing on the caramelisation of the cauliflower and the slight sweetness of the accompanying wine, a Cave de Hunawihr, Pinot Gris Reserve, 2011. (The pairings were in general as good as the food.) 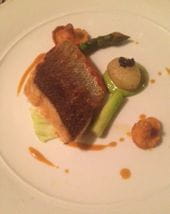 There was super-fresh seabass, with a lovely crisp skin, wild garlic purée, a sweet, mealy new potato, a couple of girolles, a spear of asparagus, a couple of leaves of hispi cabbage and a slick of lobster sauce. A perfect miniaturised fish dish with its own veg - The Hole in the Wall's thoughtful contribution to your 5-a-day. It needed a slightly drier wine than the Domaine Treloar muscat it was paired with though - a Savennières maybe.

Next the dish that Rushmer cooked in the Masterchef final 4 years ago - two slices of very rare duck breast, pickled cucumber and spiced caramel with a crisp rectangle of rosti (below). Impressive but slightly overworked - not quite in the same relaxed, intuitive register as his current food. Brilliantly matched with an orange wine though - the 2010 Equipo Navazos, Bota de Vino Blanco 44, "Florpower". 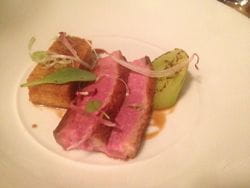 An extra dish - beef cheek and shin of a marvellous fall-apart texture with celeriac and bone marrow mash. Full marks to the kitchen for resisting the temptation to coat it with an over-extracted sauce. It was partnered with an equally robust Languedoc red, the 2009 Domaine de Trinités, La Deves which the sommelier Joel Servy recommended when he found we had a house in the Languedoc and hadn’t tried it.

For dessert, to which I admit we didn’t do full justice, there was a coconut panna cotta with green mango and tamarind sherbert, and a truly lovely warm white chocolate cake with seared strawberry, sumac and ‘sticky micky’ jelly (below) made from a late harvest wine of the same name from the Eradus estate in Marlborough, New Zealand Oh, and the lightest, airiest doughnuts and a pool of salted caramel to dunk them in - as if we hadn’t eaten enough ... 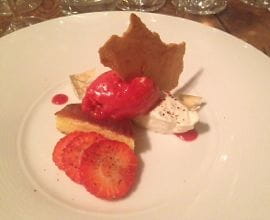 Although, as I say, I’m generally not a fan of tasting menus this was a stunner. It’s rare to find a meal achieve such a high standard course after course. (Rushmer cites Thomas Keller of French Laundry fame as a major influence.) The engaging Servy, who drives the team, has done time at Midsummer House and Hedone.

It’s a very special place which if there’s any justice will get at least one Michelin star. Though I do worry about the carpet.

The Hole in the Wall at Little Wilbraham is about 6 miles east of Cambridge city centre (about a £20 taxi ride if you don’t want to drive but don’t let that put you off). Tel 01223 812282. Lunch from Wednesday-Sunday. Dinner from Tuesday to Saturday. The tasting menu is £45, matching wines £35. A la carte is also very reasonably priced or you can eat in the bar which is just like a typical country pub (apart from the food, of course).

Disclaimer: We paid for our tasting menus and most of the wine though were brought a couple of extra dishes and glasses to try. Our bill was £135 for two.

sounds amazing. Does Stephen Bull still have an involvement here?