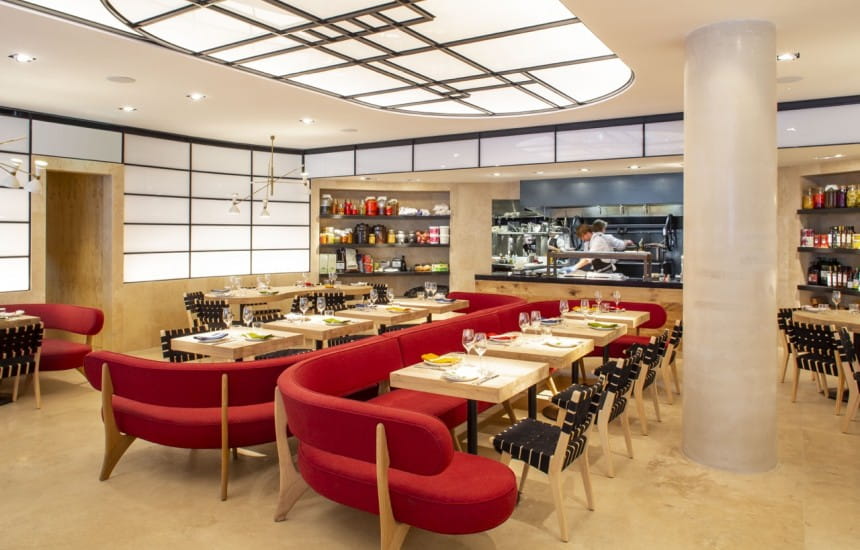 Anyway it's benefitted - as most restaurants do - from bedding down so what can you expect?

The room itself is large, airy and smartly cosmopolitan. You feel it could equally well have been opened in New York, Hong Kong or Dohar as indeed it might in the future although Ottolenghi didn’t roll out his Piccadilly restaurant Nopi which Rovi resembles more than his eponymous cafés. Life is brought to the room by the circular bar in the centre and open kitchen at the back. Even the loos - possibly the most elegant I’ve come across - have sensuously sculpted blond wood doors

The menu also strikes me as more ‘plant-based’ than anything he has done before - or at least it was. On this last visit it seemed there was more meat on the menu. Seems a shame in a way - a similar thing has happened to one of my favourite places to eat in Bristol, Root but I guess you have to turn the stats about vegetarians and vegans on their head. Yes, 12.5% of the population now class themselves as vegetarian for vegan, according to the latest Waitrose trends survey, but that leaves 87.5% who do not. But many omnivores like me make veggie choices in restaurants and I suspect that's who Ottolenghi is catering for. 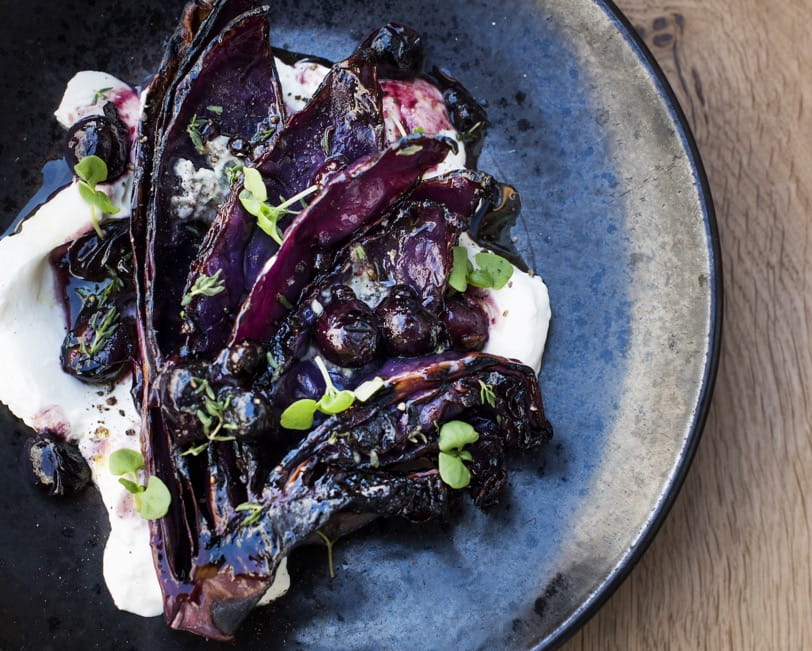 There was more variety in the menu too this time than in August. I remember ordering four dishes back then that while delicious were very similar - grilled or roasted vegetables with a dairy-based dollop or dip. There’s still a fondness in the kitchen for that treatment. There is a wonderful dish of dark, charred red cabbage with gorgonzola (above) and sweetly earthy hasselback beetroot with lime cream and herb salsa but there are other dishes like the inspired - and incredibly tender - squid and lardo skewer with a spicy red pepper glaze and a crunchy fennel salad that offer real contrast. I’d go back for that alone.

Of the four meat dishes on offer we went for three - another skewer, this time grass fed onglet - a tad tough but the fermented green chilli sauce that went with it was deliciously punchy; excellent congee topped with sticky Asian-spiced braised beef (there seem more Asian influences than in any of his restaurants to date and my favourite dish, a Jerusalem grill (below) - a plate of spicy offal, flatbread and homemade pickles we all piled into. We also ordered sides of hay-smoked pink fir apple potatoes (not quite so convinced by that one - a bit 'grassy') and tomato carpaccio, a tomato salad given an Asian spin with ginger, spring onions and pickled chillies and a good clean bright counterpoint to the richness of the some of the other dishes. 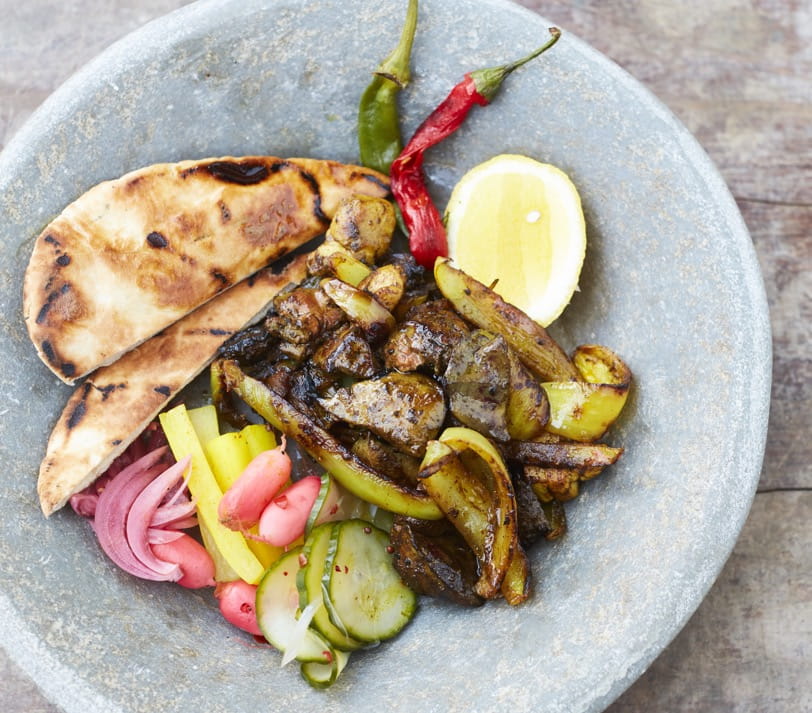 I probably don’t need to say this to you but make sure to leave room for dessert. We demolished three - some airy little plum and juniper doughnuts with bayleaf cream which I remember from last time), a fig clafoutis which was more of a cake than a clafoutis but none the worse for that and, best of all, roasted pear with mastic ice cream and filo which was transformed into a crisp flaky multi-layered biscuit. (Will we see roasted pears on menus now like we’ve seen roasted cauliflower and cabbage? I suspect we will.)

Downsides? Well, it’s a bit spendy - four of us including a 13 year old and two of whom weren’t drinking managed to run up a lunchtime bill of £250 though we admittedly ordered a good deal more food than most reasonable people would. A small but delicious snack of crumpet lobster toast was £8 for a couple of mouthfuls (still, lobster ….) and I imagine the Jerusalem grill (£19) costs about a tenth that amount in Jerusalem but was impressively tender which wouldn’t necessarily be the case on a street stall. The red cabbage was £10, the doughnuts £9 - you can see how how it mounted up. Still, this is Fitzrovia as we must call it these days (just north of Oxford Street if you can’t place it)

The wine list is largely natural which is to Yotam's - and my - taste but I’m not entirely sure it goes with the clean bright flavours of the food. I wasn’t drinking on this occasion but my pals ordered a 125ml glass each of the La Tranchee Yoyo from Banyuls at a pretty hefty £15 a pop and a slightly murky Czech pinot noir from Stapleton and Springer (£10.50) so the wine element of the bill alone was £51 before service.

Speaking of which it (service) could do with finessing. We felt a bit pressured as staff hovered over us to whisk plates away but were strangely absent when we needed to pay the bill. But, it's a minor niggle which pales into insignificance in comparison with the food which is glorious: boldly flavoured, original and a riot of colour as you’d expect from Yotam’s books and columns. The chef pal I ate with reckoned it was the most interesting meal he'd had during a few days eating his way round London. So go, just remember not to get too carried away.

PS There is plenty of bar space so it’s a good place to eat on your own if you need a bolthole from the steaming hell of Oxford Street.