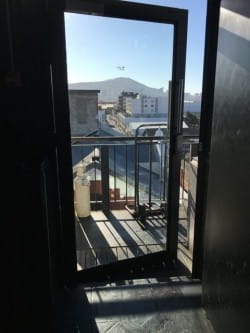 You may fare better with its younger, more laid-back sibling The Pot Luck Club which is situated in the same former industrial complex called the Old Biscuit Mill but on the top floor with dramatic views over the city

Even then we had to pull strings to get in but admittedly that was on a Saturday night.

It is - pause for a groan - based on a small plates formula but at least they have the nous to not bring them all at once and deliver them in some kind of logical order from lighter flavours to more intense ones. You need time to appreciate both the beauty of the plates and the myriad flavours and textures of the food.

The menu is divided into different sections - salty, sweet, umami, sour and bitter and sweet ending. You jot down what you want on a pad. It started with a plate of ‘Pepe’s’ carrots (have you noticed how on-trend carrots are?) with goat ricotta and roasted sunflower seed brittle. I’m not sure it was particularly umami but it was a lovely contrast of sweet roots, creamy cheese and crunchy seeds - almost like a deconstructed carrot cake. Frugally the carrot tops were used as a garnish. 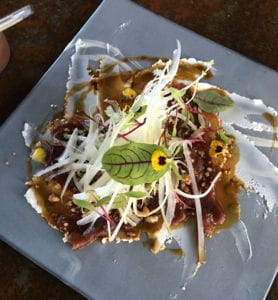 A dazzlingly pretty plate of springbok carpaccio (right) with smoked pinenuts and burnt honey and soy dressing topped with wafer thin slices of ..what? Mooli, I think …salad leaves and edible flower petals brought us back to sweet (it was lovely with the 2009 bottle of Ashbourne Sandstone, the lush blend of Sauvignon and Chardonnay, we were drinking)

Then a spectacularly original take on a tartare, this time intensely umami: miso-cured trout, ginger tahini, teriyaki-braised sweet potatoes under a dome of fine slices of radish (also great with the wine) 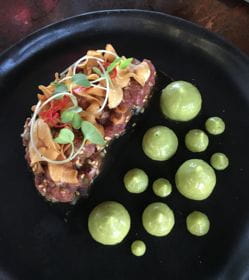 Next beef tartare on toast with parsnip crisps and an artistic array of avocado cream blobs of varying sizes which made a smooth counterpoint to the raw meat (texture colour and flavour are so skilfully combined here). Then, more striking still, from the sour section, ceviche with jalapeno tiger’s milk, quinoa, samp (corn) and ethereal, lacy masa crisps.

By this time we were on to the reds we’d brought - both light, bright and youthful: Duncan Savage’s 2014 A Fine Line (a blend of cinsault, grenache and syrah) and the deliciously swiggable 2015 Rall cinsault. Cinsault may be my new obsession this year.

There was a slight change of pace with two warm dishes, a tender tentacle of octopus, crusted and deep-fried, served with doenjang (fermented soybean) mayo, pickled cucumber and a Jackson Pollockesque splattering of octopus teriyaki 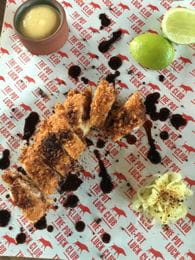 And finally (of the savoury dishes we ordered) pig’s head saam - the fatty meat clevery offset by pineapple kimchi, miso dressing and bean powder, all designed to be rolled up, laarb-style, in lettuce leaves.

We were too full, really, for a dessert but I couldn’t resist seeing how they’d handle one so ordered a summer berry gratin with yuzu ice cream and a rakishly slanted disk of kataifi (vermicelli-like crisp Greek-style pastry) which made a refreshingly summery end to the meal.

At the current rate of exchange (23 Rand to the pound, 16 to the dollar) Pot Luck Club is the most incredible bargain. (That stunning ceviche dish was R80 or £3.50, for example.) You just need that fabled luck to score a reservation. Personally I’d turn up and hope for a no show. If you can’t get in you can always eat at the very pleasant Burrata downstairs which I featured in my recent match of the week.

I ate at Pot Luck Club as a guest of Wines of South Africa.