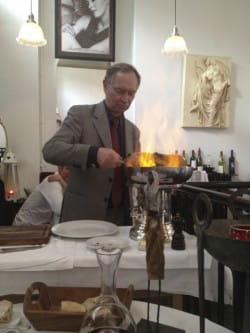 Otto’s, London - the perfect place for a four hour lunch

If you’re a reader of - er, hem - a certain age who longs for the days when French food was fancy and lunches lasted until dinner you’re in luck.

Otto’s is a true blast from the past: a style of food - and service - you thought had disappeared back in the days of nouvelle cuisine.

Not that you’d know it from the outside. I’m sure Otto would be mortified (yes, there is an Otto) but it looks indistinguishable from the breakfast cafés that dot the insalubrious Gray’s Inn Road. Apart from the posh bottles of wine in the window.

Inside is grander but in a splendidly baroque way. There are statuettes and bas-reliefs, and black and white film posters. And strange African figurines on the tables (why?). There is a large duck press - probably the only one in London but I’m sure we’ll have copycat duck presses popping up all over the place in no time. A pop-up called The Duck Press, even.

What you really want is a table where you can watch Otto whisking away at the bloody sauce - and here I’m being descriptive not blaspheming - that goes with the duck. Table 9 at the back is the ringside seat. 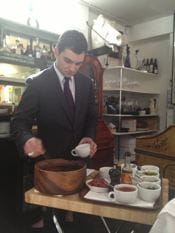 Not feeling quite up to it appetite-wise or financially (it has to be pre-ordered at a cost of £120 for 2) I went for another dish that had to be prepped at table: the steak tartare which arrived with a whole trolley of condiments. Our waiter asked me how I liked it (spicy but not too hot) then seasoned it exactly right. If I’m finding fault which I’m not really inclined to do, so charming is Otto’s, it would have been better served with chips than the rather solid rosti cake that accompanied it. But with tartare that good I'm not complaining.

My starter was slightly bizarre though. Having not read the menu carefully enough I assumed tête de veau would be cold but it arrived in slightly gelatinous warm chunks scattered on a mound of beets, carrots, onions and croutons - not unappetising but way big enough for a main course.

My companion's (blogger Zeren Wilson), colourful monkfish and red mullet terrine (below, right) with blobs of saffron aioli was lovely though and a very good match for the well-priced half bottle of gloriously creamy Domaine Larue Saint-Aubin Les Cortons 1er cru we had ordered to kick off. His duck sausage (a skilful use of leftovers?) was also top notch making the set price lunch at £24 an absolute steal. Just don’t expect to go back to the office - or anywhere that doesn’t have a sofa - afterwards. 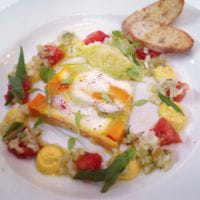 Cheese is - what else? - selected old fashioned cheeseboard after a lenghty discussion on preferred styles and we somehow - God know's how managed to fit in a pud - a rather lurid but strangely delicious strawberry and pistachio 'macaronade'. As I say the lunch did take a good three and a half hours.

The wine list is a joy: well-priced and surprisingly eclectic (so not just French). Champagne (a well aged Ayala) is served in unwisely large glasses. We also recklessly ordered a youthful Bachelet Monnot 1er cru Maranges as neither of us could remember trying Maranges which Otto ceremoniously decanted. I vaguely remember thinking it went better with my tartare then Zeren’s more robust duck sausage and could have done with a couple more year’s ageing.

All in all this is a fabulous place. Totally, refreshingly original, bohemian and a great deal of fun. If you want to escape the relentless hipsterism of the current London dining scene, go. I’ll certainly be back.

PS There’s a large (private-ish) room downstairs with a huge table which would be perfect to book for a fiftieth - or possibly even an eightieth - birthday if you last that long after eating a few times at Otto's. I’m sure he would do you proud.