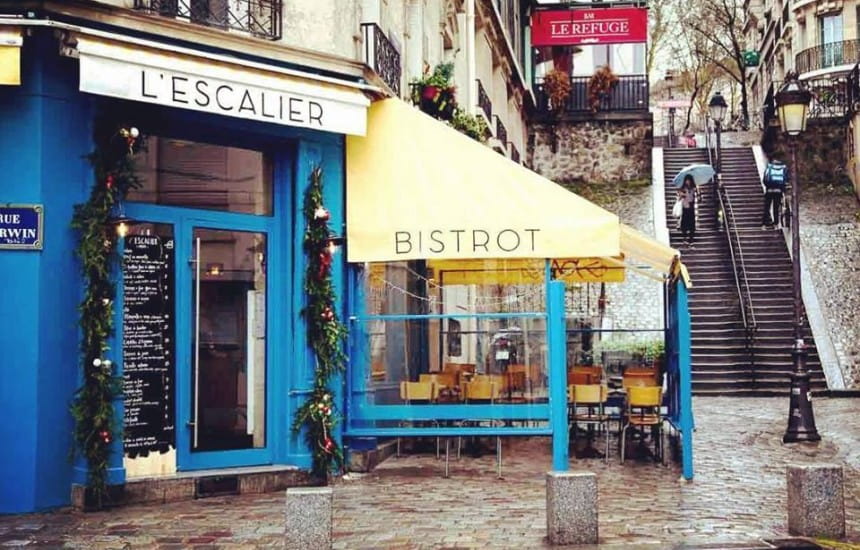 Imagine it: slender women with tiny dogs meeting to drink espresso and smoke slim cigarettes streetside at a corner café; an elderly couple out at the brasserie they have been visiting every Wednesday for the past 15 years for their weekly bowl of soupe à l’oignon; a first date where a couple shares a dozen oysters and a bottle of Crémant. Take this image, and put it into a restaurant.

I stood at the top of the stairs above the restaurant and asked my (truly) Parisian friend if he’d ever been there before. He’d never even seen it. To be fair to him, L’Escalier only opened in October 2018, but you’d think that because this place is exactly 28m away from the Lamarck-Caulaincourt Metro station, a Montmartre born-and-bred local would notice a bright yellow awning popping up out of nowhere.

This visit was my third in three months. It first grabbed my attention before I even moved to Paris; the whole inside of the place was ripped out and, naturally, that piques any foodie’s interest. What they put back into the empty shell is delightfully minimalistic – bare stone walls, wooden tables and spartan wooden chairs, a metal bar with unvarnished wood shelves adorned with fairy lights.

Everything served in L’Escalier screams French. When I think of an honest French dining experience, everything is served simply, without fuss, and drenched in sauce. It’s a tough choice between Fine de Claire N°3 oysters, celery velouté with coffee and hazelnuts, a classic homemade foie gras, fricassee-ed cockles with coconut milk… but I choose to dive into the Oeuf en Meurette – a traditional Burgundian dish of a perfect poached egg perched on top of a sauce of red wine, bacon, onion, mushrooms and croûton . This dish is everything I want French food to be - It’s delicate, classic, saucy, and a perfect way to tease the palate and stomach before my pièce du boucher.

Translated as “butchers choice”, the piéce du boucher is tender and juicy and seasoned as meat is only seasoned in my dreams. Served with gratin dauphinoise and rocket, it may not be revolutionary, but to me and many other foodies, sometimes it’s not about making foams and jellies and marshmallows out of unsuspecting ingredients, but just cooking simple ingredients well.

"It may not be revolutionary, but to me and many other foodies, sometimes it’s not about making foams and jellies and marshmallows out of unsuspecting ingredients, but just cooking simple ingredients well." 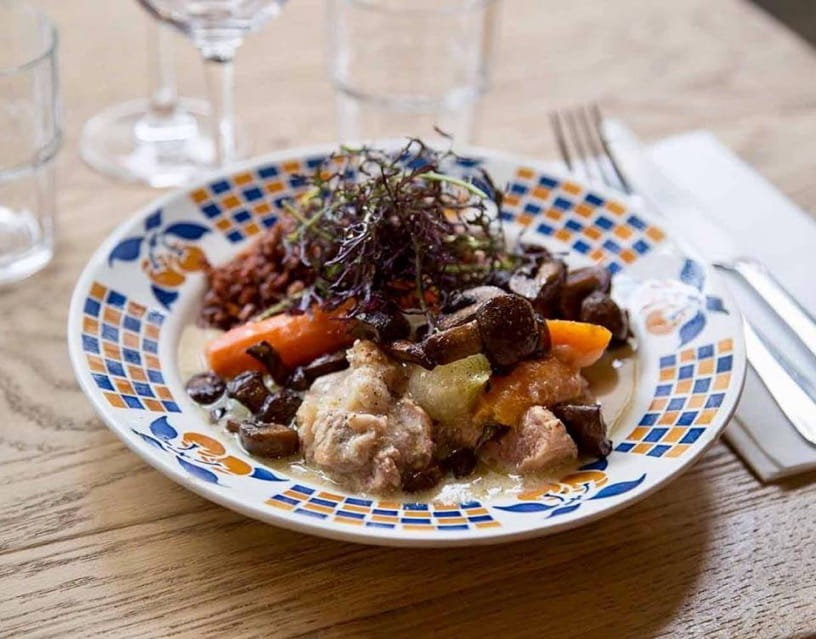 On the menu may also be a blanquette de veau - the heartiest of veal stews which looked and smelled like a hug from your mum -, a fish of the day, and a risotto, all of which are made or served with the most seasonal produce you can think of. The menu is short and repetitive at some points – red rice is used in two main dishes – but there is something for most tastes.

As for the wine list: the five wines by the glass are written in chalk pen on the front of the white wine fridge, which I think is absolutely perfect, and I believe has changed since my first visit – an idea that I love since it keeps things fresh and interesting every time you return.

The list itself is not your Michelin-starred tome of the greatest vintages in the past two centuries, as it is only about 30 wines long, but there is reasonable diversity and it’s not ridiculously overpriced like some places you can find in Paris. A glass costs around 6€, and they aren’t exactly scrimping on the servings, either.

Since I can eat for Britain, I squeezed in a vanilla and chestnut mille-feuille for dessert. I discussed with Marie, my waiter, how the pastry chef, with every dessert, manages to make everything just-sweet enough to be perfectly well balanced. I’d recommend trying their traditional 'flan' as well – you can’t visit Paris without an inhumanely large slice of flan.

This is the kind of place I would (and do0 go by myself, simply because it is the place to indulge that image of Parisian food culture. The staff are charming and sing along to Ms. Lauryn Hill when she comes across the sound system, the customers, who fill the tables like clockwork at 8pm on the dot, are smiling and laughing, the food is cracking, and you’re pretty much guaranteed to come in at under 50€ per person. I came in on the cent, and had an aperitif, two glasses of wine and three courses (because it’s the weekend and 2019 is all about treating yourself).

L’Escalier isn’t Arpège, it isn’t Alain Ducasse, and it isn’t Pierre Gagnaire. It’s a bistrot in the historical centre of the bohemian world. And it’s a great place to sit with a friend, have a glass of bubbly, a fantastic meal, and simply enjoy being Parisienne for a night.

Nathalie Gardiner is a trained sommelier and is currently studying for a Wine and Management Diploma at the Cordon Bleu Institute in Paris. Pictures courtesy of L'Escalier.

It’s not even cocktail hour but this review has me salivating and mentally accelerating on the M5 (husband driving) so I can get home to plan my next trip to Paris. Is it just me or could that ‘Oeuf en Meurete’ work for my Sunday brunch tomorrow...?