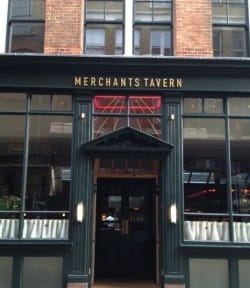 Sweet, but nothing remarkable about that you might say but Borthwick, a talented chef in his own right, had a terrible accident a year ago when he fell off his bike and suffered serious head injuries. It’s nothing short of miraculous that he’s made the recovery he has and is fronting this grand project which is backed by Canteen founders, Dominic Lake and Patrick Clayton Malone. (Hartnett meanwhile has her own restaurants to mind.)

The great open room with its airy skylight and sweeping semi-circular banquettes appeals the moment you walk through the door. There’s a retro typically Shoreditch bar area in the front which has pulled off the Hawksmoor trick of looking as if it’s been there for years and a large open kitchen at the back. All very 2013.

The menu, wine list and cocktail list are all short, a sage decision by experienced restaurant manager Thomas Blythe (ex St John), the other member of the team. It makes for relaxed eating. The menu is seasonal - where isnt these days? - and sophisticated. Borthwick’s previous job was at The Square and he’s also worked for Michel Bras - an influence that shows in the freshness and simplicity of the food. 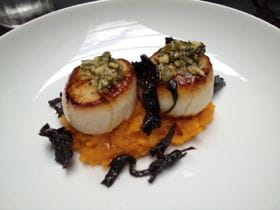 I chose well. My starter of scallops, crushed pumpkin and trompettes de la mort mushrooms was a wonderful combination of sweet and earthy and a main course of cod, ham leeks and salsify fell almost into the category of comfort food - the kind of thing I would want to eat if I were feeling poorly and wanted spoiling. It went perfectly with the gorgeous Fanny Sabre Savigny-les-Beaune my host had ordered which I later discovered was £78 a bottle. Eeek! Like the other wines on the list it’s available by the glass so try it if you get the chance.

The third member of our party - and the only one whose dishes I could reach - experimented with the set lunch which featured a tasty but slightly messy-looking starter of home-cured salmon with dill oil and a first class dish of braised pork cheeks and 'creamed potatoes'. Which reminds me, we had mash too - baked potato purée, a must-have side. 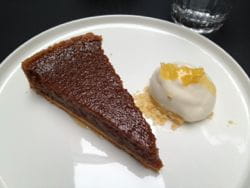 The one pudding we ordered - definitely pudding rather than dessert - a soft warm honey and walnut tart with whisky cream - was also spot on.

If I had a criticism it would be that portions - especially the scallops - are small for the price an accusation you certainly couldn’t level at the fixed price lunch which is £18 for two courses. I would guess ordering off the à la carte costs about £40 a head plus service*.

It's early days but Merchants Tavern already passes a crucial test for me. If a foodie friend was coming to London for a few days where would I recommend them to go? Merchants Tavern would definitely be among the options.

*Although they were still charging soft opening prices when we visited. (The restaurant opened on the 8th).