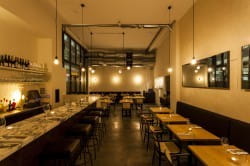 Ellory, Hackney: well worth the detour

With city centre rents unaffordable for most first-time restaurateurs there’s a growing trend for the most exciting openings to be happening in local neighbourhoods. That’s certainly been the case in London for a while.

But what’s the incentive to take what can easily be an hour’s schlep across the city involving convoluted transport links to eat when you probably have perfectly good restaurants on your own doorstep?

Well a full 125ml glass of Agrapart’s 'Les 7' 1er cru, one of the best grower champagnes around, for just £10 might be one of them and that’s what Ellory in Hackney is offering to sweeten the blow of having to hang around on a rainy night for the D6 from Bethnal Green*. 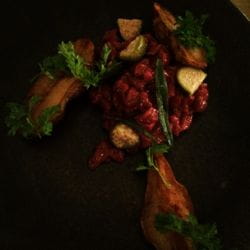 There’s plenty more to tempt at this stylish small wine-focused restaurant which was opened back in November by chef Matthew Lucas Young and sommelier Jack Lewens in Netil House, an arty space which houses over 100 studios. Both have an impressive pedigree. Young was the much-admired chef of the Wapping Project and Mayfields, Lewens has worked at The River Café, Quo Vadis and Spring.

Having both eaten out for lunch we passed on the fairly priced £38 5 course tasting menu in favour of picking our own dishes (brownie points for offering that alternative and for delivering them one by one in a logical order rather than the bizarre hot-to-cold mish-mash favoured by so many restaurants these days.)

There’s real skill in the flavour, colour and texture combinations. A coarsely chopped slightly smokey venison tartare came with nutty Jerusalem artichokes, a clever riff on meat and two veg that almost looked, in my inevitable instagram snap, like a Dutch old master (above). It was perfect with the Agrapart.

The smoked eel with choggia beetroot and pear which came next was even better, a lovely contrast of warm, smoky flesh, sweet fruit and earthy vegetables. Young likes to limit the number of ingredients on the plate, an approach that permits a wine (in this case a very young but not the least awkward 2015 Muscadet One Shot of Granit from Domaine de Bellevue) to shine. With a seasonal dish of squid with blood orange and chicory we had a richly textured 2010 Arbois Cuvée des Docteurs* from Lucien Aviet made from Melon a Queue Rouge, a local variant of chardonnay. Mature chardonnay with a fresh seasonal salad? Absolutely! 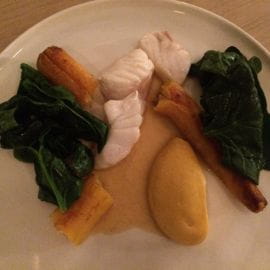 But the best dish - and pairing - was the shared main we managed to find room for, described simply on the menu as turbot, brown butter and carrot which was served two different ways - roast and as an unctuous purée with some wilted greens on the side. White, orange and green - you can see how Young applies his art school training. With that we had a glass of a new (to me) orange wine called La Macération du Soula, a gorgeously rich skin contact Vermentino from Gerard Gauby in the Roussillon. That was worth the detour too.

We skipped dessert in favour of cheese, again described deceptively simply as Berkswell and pear. But again, what presentation. A flurry of Berkswell shavings over slivers of pear with shards of crisp, well-baked flatbread on the side. And a further ‘taster’ (er hem) of Michel Lafarge’s still surprisingly vibrant 2006 Passetoutgrains L’Exception - another vinous treat.

You’ll get the best out of Ellory if you just leave it to Lewens to pick your wine for you. There’s not so much an intention to match the ingredients precisely but to pour an interesting wine with an appropriate style of dish which Lewens does with great skill. That said it could turn into a more expensive evening than you intended. Our bill for two was £99, champagne excluded* - a bit indulgent for a school night (and way over the Government’s guidelines) but certainly cheaper than a comparable meal in the West End.

And I did succumb to an Uber on the way home ….

Ellory is at Netil House, 1 Westgate Street, London E8 3RL and currently open from Tuesday to Saturday from 5-11pm. *Apparently the nearest station is not Bethnal Green but London Fields on the overground!

Disclosure: We were treated to a glass of champagne by the management who recognised us when we came in. (I was with Niamh of @eatlikeagirl).

Recently? I should update the post because the team has now left and installed themselves at Leroy and this restaurant is now called Bright. Sorry to hear you had a disappointing time anyway.

I ate here and the service and food was not as good as expected, at best mediocre. The menu by chef Matthew Young was overrated. It's no wonder he left.