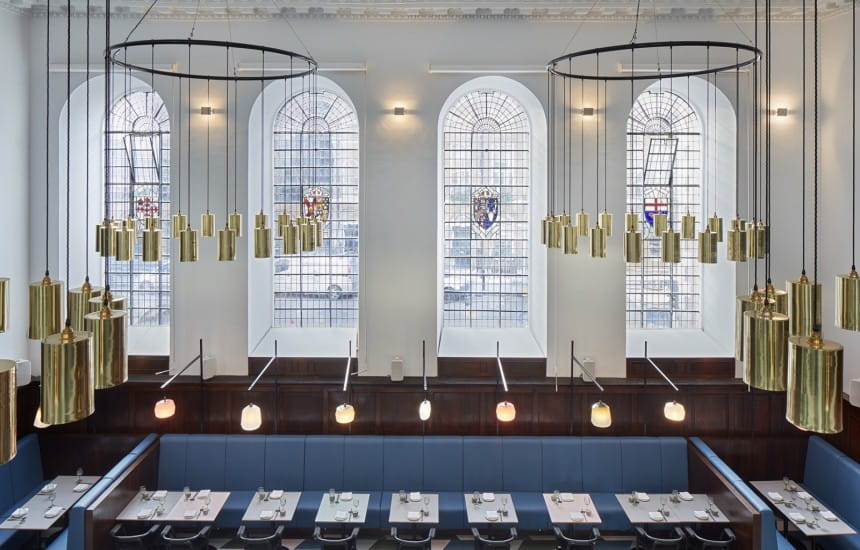 The surroundings are different for a start, Duddell's Hong Kong like most smart HK restaurants is in what appears to be an office block - quite casual by HK standards, all very smooth and beige. We were struck, given the prices, by the age of most of the diners (mainly millenials) - it was obviously the hot place to be.

Duddell's London occupies a very different building - a converted church (St Thomas's) which while imaginatively repurposed seems slightly at odds with its new occupant. There’s a rather bleak gallery round the top of the room into which I imagine you may be consigned if it's busy - that doesn’t look a lot of fun.

The menu is similar though not identical. As you'd expect dim sum is the feature at lunchtime. Much has been made of the Cantonese dim sum ‘symphony’ and gold fish-shaped prawn dumpling but we were pretty pleased with our à la carte choice - Har gau, poached chicken dumpling and crispy char siu bun - the cheung fun were mysteriously all off. 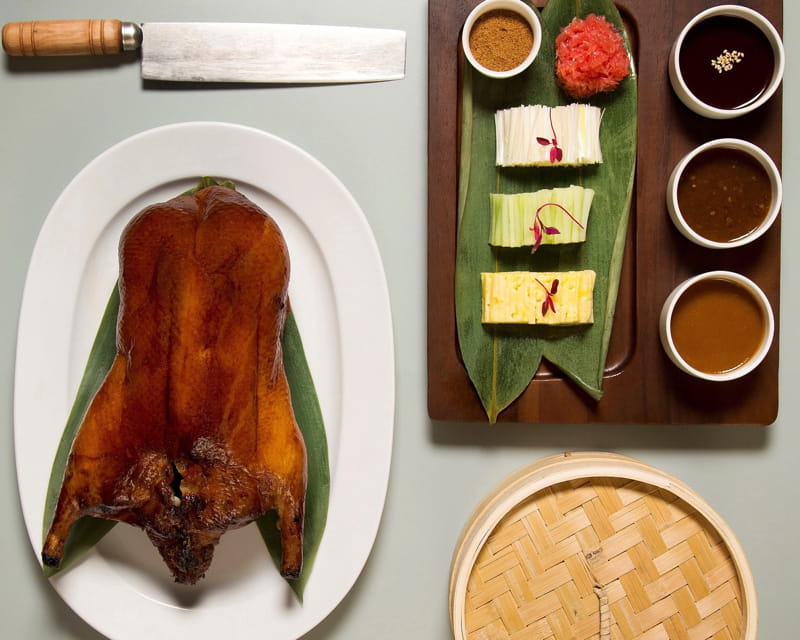 The high spot was the Peking duck which was carved with great ceremony at the tableside. The deeply bronzed shards of skin are served with fennel sugar, the breast with homemade pancakes, finely sliced onion, pineapple and pomelo and a trio of sauces - mandarin, sesame and hoisin (I think) (The combination of mandarin, pineapple and duck is just sensational)

The big disappointment was the crispy salted chicken for which we waited some considerable time and then tasted nothing like the memorable dish we'd had in Hong Kong with its juicy meat and fabulously crisp skin. Nor did the accompanying dish of asparagus and mushrooms have much in the way of the advertised truffle. Again they were out of pak choi which seems an odd thing to run short of.

We also extravagantly ordered some Cantonese soya noodles which were utterly delicious and would make a good quick lunch on their own. The lobster noodles are apparently even better - as indeed they should be for £48.

There's good (if expensive) wine list - the sommelier Konrad Lassota was touchingly pleased when we ordered a glass of orange wine, Maturano from Lazio, of which he was obviously a big fan. It was was remarkably good with the umami-rich food. (Maturano is a little known grape variety, it turns out. You can buy it here from Billings & Briggs) There's also a good tea list.

It will be interesting to see how well Duddell's fares once the opening fuss dies down. It’s not cheap, it's got strong competition on its doorstep in the form of Hutong and the much fêted Andrew Wong is moving to the City next year. There are certainly glitzier, buzzier restaurants if you want to show off - and ones with smoother running service. Still that duck is definitely a winner. I’ll give it another try.

I ate at Duddells as a guest of the restaurant.