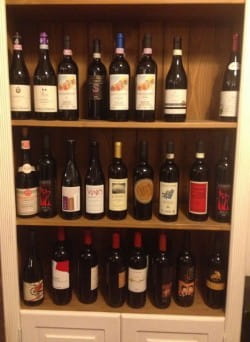 With trattorias on every street corner you might wonder why you need to jump on a number 8 tram and go to the end of the line to eat but Da Cesare is well worth the detour, as Michelin famously puts it.

I wouldn’t have known about it but for a couple of local bloggers Katie Parla and Hande Leimer (aka vinoroma) who we’d run into by chance at a wine fair in the Auvergne earlier this year. Both professed it was their favourite restaurant - not least because of its wine list - a big claim in a city so amply provided with places to eat.

Not all of them are up to scratch though and Da Cesare is. It looks modest enough - a large, modern white almost canteen-like room with some outside seating - there’s nothing fancy about it - but it’s rammed with a happy crowd of locals. You definitely need to book, especially for Sunday lunch Hande and her husband Theo told us.

We started with some crisp flatbread (pizzi bianchi) then - what else in Rome? - a selection of fritti. They included a paper cone of beautifully crisp fried squid, fried gnocchi with cacio e pepe (a cheese and pepper sauce that’s normally used on pasta) polpette di melanze (aubergine croquettes topped with tomato) and - best of all - polpette di bolitto, fat little fried nuggests of deeply savoury braised meat topped with pesto. 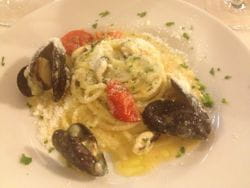 Pasta was particularly good. Hande suggested we should have spaghetti with mussels and pecorino, an unusual but delicious combination of seafood and cheese, then the owner Leonardo suggested tagliatelle with ceps and I’d set my heart on a good carbonara. It turned out to be the real deal - fabulously golden and eggy, made with guanciale (pigs cheek) and mezzi rigatoni rather than spaghetti - the best I’ve ever eaten.

We washed all this down with a couple of ‘orange’ wines from the largely organic and natural wine list: a 2010 Paski Campania Coda di Volpe and a lovely 2007 Emilia Ageno which suprisingly also went with our shared plate of grilled lamb chops - my match of the week that week. The only main course we could manage after the pasta blowout*. We also tried a characterful thirstquenching local red, the bright, briary 2011 Damiano Ciolli Silene Cesanese Olevano Romano from Lazio. 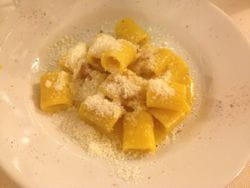 I’d have given up at that point but Hande said we must have the panna cotta. So we sighed and did and it was perfect - creamy, wobbly and bathed in a rich dark caramel.

We spent about 50€ (£42/$67) a head on this feast which for Rome is great value, particularly for food of this quality. Despite the fact that it’s been extensively written about by Parla and Leimer it’s not overrun with tourists who obviously find the thought of a tram-ride to an outlying neighbourhood daunting. But it's easy so don’t be deterred. It was the best meal we had in Rome by far.

If you want to have an experience like ours both Katie and Hande organise tailormade restaurant visits for visitors to Rome and Katie has a very useful app called Katie Parla’s Rome. Both collaborate on The Rome Digest - which highlights events in the city each week.

* You might want to leave room for one of their offal dishes which are a big feature.

To get to Da Cesare pick up the number 8 tram heading for Casaletto (in the opposite direction from the Piazza Venezia) and sit on it until you reach the final stop - about 20 minutes from the centre. As you get off the tram look backwards over your shoulder, cross the road and you’re in Via del Casaletto. Couldn’t be easier.

You can buy tram tickets in tobacconists and magazine kiosks.

Very useful review.
I must taste spaghetti with mussels and pecorino, an unusual b combination of seafood and cheese.
very good fiona :-)

And thrilled to see some of my friends in Rome as your guide.

And mostly as a fellow believer in the core wonder of natural wine as an approach to taste and winemaking, yet another example of how (besides so much shrill noise by some UK writers) becoming firmly the status quo for great restaurants and wine lists