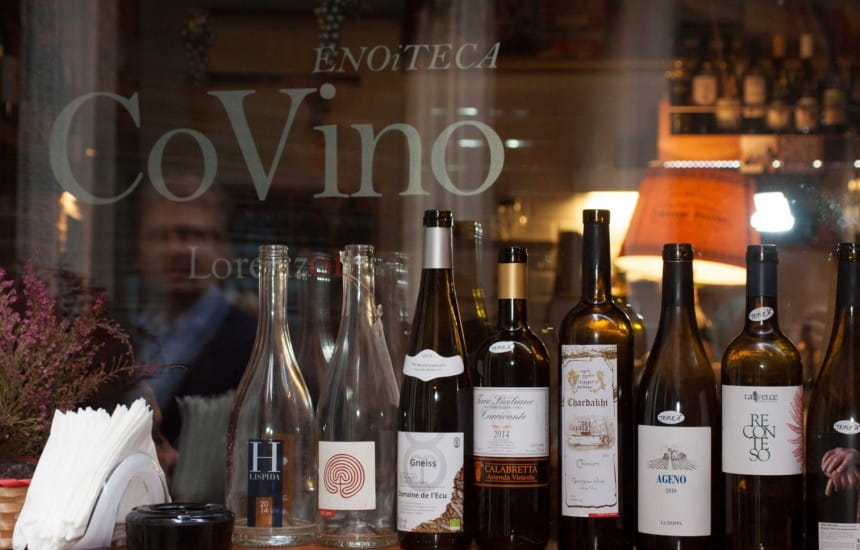 One of the strange things about the restaurant scene in Venice is that the big players are pretty well exactly the same as they were when I last went 10 years ago (yes, way too long!) Only the prices have changed - unfortunately in an upward direction, aggravated by our lamentable exchange rate.

So I was particularly taken by the offer of a 40€ set price menu at a new(ish*) wine bar called CoVino even though it turned out to be an offshoot of one of the big names, Al Covo. (You might be thinking 40 euros isn’t cheap for a 3 course meal but I assure you it is for Venice.)

Anyway we managed to book - online which spared my cringemakingly bad Italian - for an early slot. They do two sittings which is understandable given they only have 16 seats. 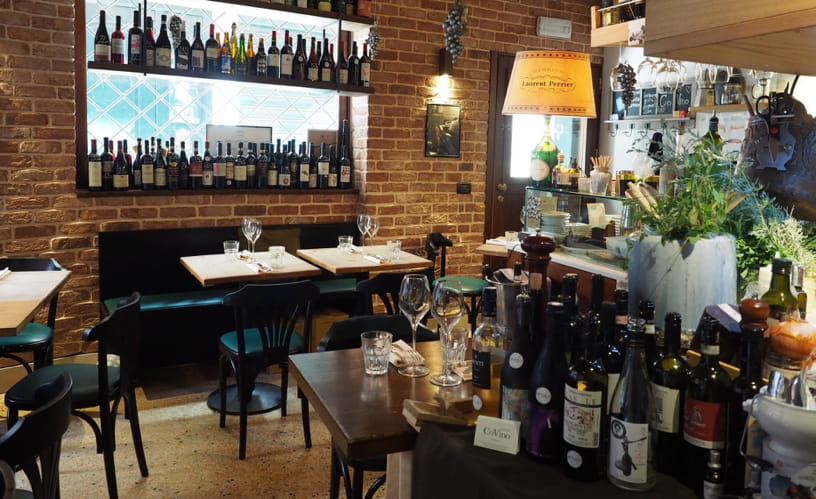 Food is turned out of a tiny kitchen with seemingly only one chef at the stove. Given there were about six choices for each course that was seriously impressive even more so as we fancied practically everything on the menu. The food is frequently described as traditional Venetian with a twist such as my bright crunchy vegetables in soar - the classic sweet-sour marinade that’s normally applied to fish.

As we couldn’t make up our minds they obligingly slipped in an extra course to share of an excellent, inky black cuttlefish which they adorned with some extra vegetables. In fact veg feature largely on the menu - sourced, they explain, from Luciano Saltin of the Rialto and L’Orto delle Vignole of Guia. I like the way they name check their suppliers. It’s all very Slow Food.

Lightly dressed raw vegetables are placed on the table at the beginning of the meal. A hummus-like dip of chickpeas came with raw prawns and fine slices of lightly pickled beetroot. Octopus is served with lava beans and tomatoes. It’s a good place for pescatarians and vegetarians.

The best dish was an incredibly tender and flavourful leg of guineafowl served with a carrot purée, artichokes and tarragon, a cleverly conceived combination that made us all wish we’d ordered it. I was slightly less keen on my main course of pork and beans where the pork was sliced thinly rather than served in juicy chunks and the rather dry leaden pasta with ragu ‘di mamma Liviana’ my friend ordered. Probably put on for less adventurous diners so not the best choice.

Desserts, especially a really boldly flavoured tiramisu with a good slug of Huehuetenango coffee, were good though but even better, and I’d recommend ordering it if you’ve still got wine to drink, was a really excellent cheese course with - that day - Robiola, Caciocavello and Monteveronese Stravecchio, all accompanied by carefully chosen condiments.

The wine list, as is very much the way these days, is natural and biodynamic and stimulatingly diverse with bottles not only from Italy but elsewhere in Europe. A small glass of their own cloudy and delicious prosecco was poured, unasked, from a magnum as soon as we sat down (at 3€ a head we later discovered though that's hardly more than a cover charge).

We ordered a couple of glasses (a crisp Slovenian white called zelen and an intriguing orange Greco Bianco from L’Archetipo) and, I seem to recall, though I failed to take a note, a bottle of 2007 Nerello Mascalese at a no means unreasonable €38 yet still found ourselves with a standard Venetian bill of over €200 for 3. We’d pushed the boat out a bit on the food by having an extra course and a fair bit of wine - you could spend less but still reckon on around €55-60 a head. Again not excessive for Venice.

The other downside - although arguably part of its charm - is that it’s quite cramped which leaves you cheek by jowl with your fellow diners so it’s not the ideal place for a quiet romantic dinner. The service, particularly the wine service, is also a touch perfunctory - our server only warmed up when we ordered a bottle despite the fact they have an excellent by the glass list. but given that Venice has 30m tourists a year most of whom, like us, don’t speak the language I guess it's understandable.

The upshot, I guess, is that I appreciated what CoVino had to offer - a modern, imaginative well-sourced menu, off the beaten track and with an excellent wine list - without totally loving it. But Venice restaurants are tricky if you’re not a local or a regular and it’s undoubtedly better value than most. And it’s definitely a good place if you’re into wine. Add it to your bucket list.

Out of curiosity I'd love to know what your favourite Venice restaurant is if you've visited the city recently.