The entrance to Cell looks like something from The Man from U.N.C.L.E, which is funny really as Berlin’s latest hot restaurant opening was conceived by a Russian chef, Evgeny Vikentev. The inspiration, we find out moments later, is not the Cold War, but the Bauhaus.

I can see it now - in the restaurant interior’s geometric and linear shapes (line, shape and colour matter to your follower of the Bauhaus), and in the artwork on the walls. Open geometric ironwork surrounds each restaurant booth, or as Vikentev calls it, ‘cells within cells’, each with a direct view into the kitchen.

With the Bauhaus there was no hiding the construction of an object, such as a length of steel or a beam, it was all part of the design. And at Cell, that means the food too, as each dish is clearly linked to the next as a key local ingredient is carried through. So it’s tasting menus only here, or rather two tasting menus (one is vegetarian) either taken as six courses for €90 or nine courses for €115.

And as the Bauhaus is celebrating a meaningful anniversary this year - it’s exactly one hundred years since it was founded in Weimar (later moving to Berlin) - Cell’s opening is opportune.

Bauhaus lovers will doubtless flock to Berlin this year – and Cell, clearly hopes Vikentev – as the city puts on various events to celebrate what is arguably the single most influential modernist art school of the 20th century, starting with Alfred Ehrhardt’s striking paintings and drawings which are on show at the Berlin Galleries in the Mitte district, until 18th April. 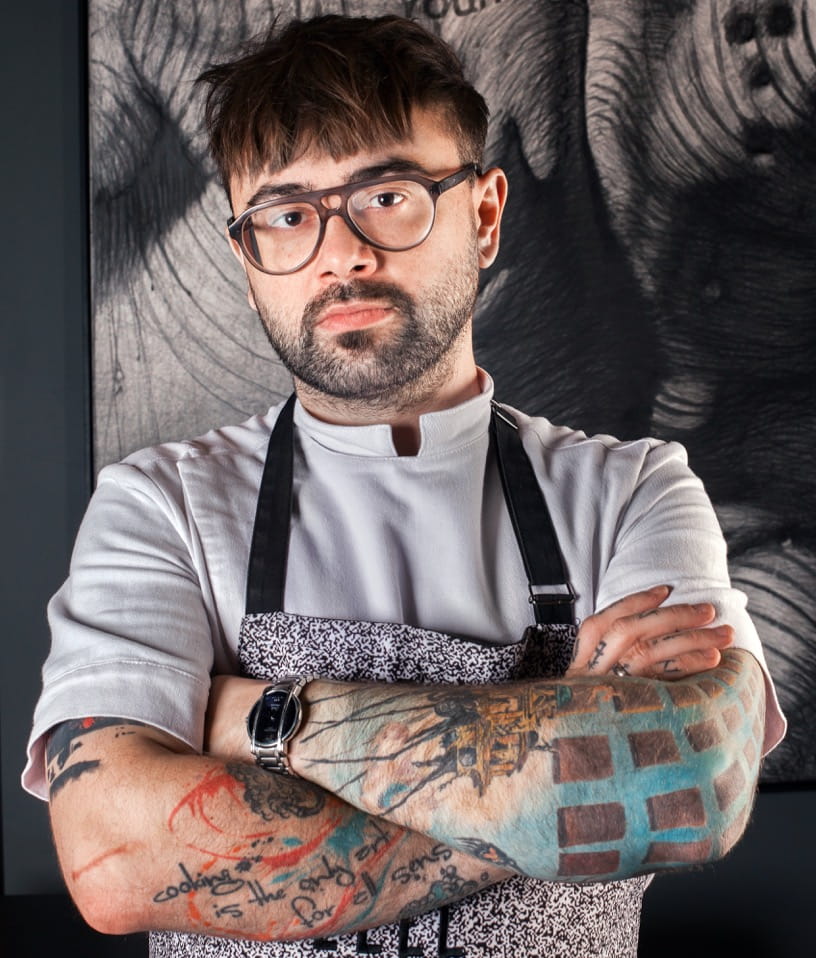 Vikentev tells us, in between courses, his heavily tattooed arms flying, why he chose Berlin, and the smart Charlottenburg district, for his first restaurant opening outside Russia. And how he wants his food to convey a meaningful message, and how he equates its conception to modern art.

“Berlin is a big multicultural metropolis, and it’s very advanced in terms of modern art. But there’s also something about the Berlin scene that really draws me,” he explains, placing a dish of wild monkey head mushroom in front of us. It's served with a savoury, faintly lemony sauce sharpened with a blueberry scented meaty jus and assorted foraged herbs, the lot cleverly washed down with a citrusy Scheurebe from the Pfalz (from Weingut Pfeffingen. €10), chosen from the by the glass list, which is split into ‘Standard’ and ‘Prestige’. 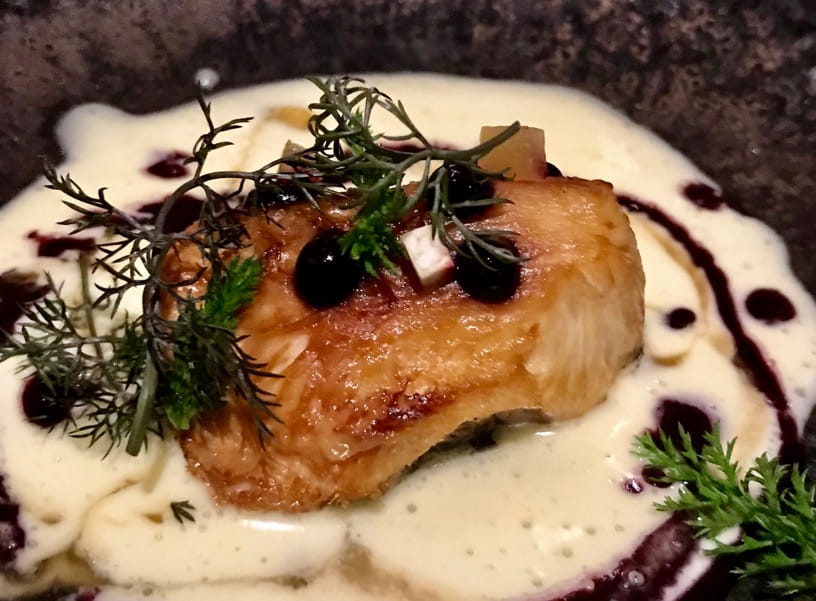 “Historically Berlin has always nurtured the ideal environment in which to question the status quo, whether social, economic or artistic. And I hope to play a part in that with menus that are not restrained by artistic geographic borders,” he says, enigmatically, pointing out that this edgier approach is a first for upscale Charlottenburg. It might sound a tad pretentious but it’s not - Vikentev loves food, loves modern art and he loves Berlin, he shrugs.

So here’s Vikentev’s first meaningful message – don’t adulterate wines with chemicals. The 400-strong wine list, put together by head sommelier Pascal Kunert, is either organic or biodynamic, and mostly both.

Back in St Petersburg, Vikentev runs one of the city’s most notable restaurants, Hamlet + Jacks, which boasts the biggest natural wine list in the country, alongside its thrilling, thoughtful food. He searches out the best ingredients from across the vast country for its ‘Ours’ menu, while also combining them with global ingredients on ‘Ours & Theirs’. Vikentev loves to travel, and has done stages in many top restaurants over the years, including Albert Adria’s 41 Degrees in Barcelona.

That mushroom dish was course number five (of nine, actually a mash-up of both menus, as some of the vegetable cooking looked so intriguing), and it followed a stunning piece of char served with swede – the swede carried through from the mussel course before, topped with a semi-transparent circle of lardo, which melted satisfyingly as a hot mustardy broth was poured over the top. 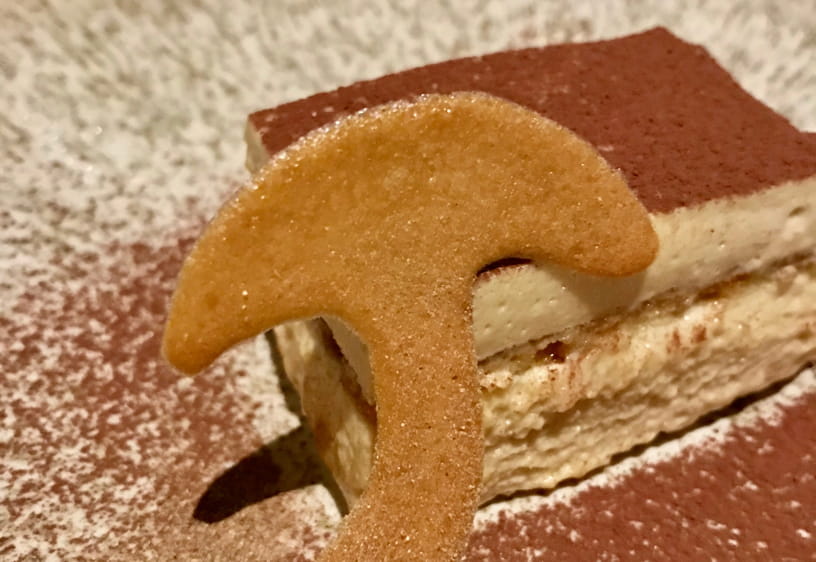 Another standout dish was the ‘celery (sic), mimolette, black truffle’ – celeriac, coiled into an intricate round with an intensely cheesy sauce and shavings of the prized funghi. While a ‘cep tiramisu’ (above) actually silenced the table, the dusting of cocoa powder replaced with dried ceps in a dish that defies description but needs to be tried. To match? A glass of delicious Cava ‘brut nature’ from Spanish producer Clos Lentiscus (€12).

A good moment then to remember the Bauhaus basic principle of internationalism and it’s willingness to grapple with, rather than shy away from, a changing world and its fundamental optimism about the future. It’s needed now more than ever - along with Cell, I reckon.

Five of Evgeny Vikentev’s favourite places to eat in Berlin

The epicentre of Berlin’s urban food scene in vibrant Kreuzberg where you’ll find Asian, African and Antipodean vendors cooking native dishes alongside local artisans (we tried a killer slice of sausage and potato pizza from Sironi),

A canal-side Bavarian restaurant and beer garden (you’ve got to do it) that was once a West German border custom house run by jovial host Benjamin Groenewold, who numbers Angela Merkel as a regular. Great schnitzels,

It might be a newcomer to the wine bar scene in Berlin, but what an entrance, with its impressive natural wine-heavy list, lively choice of vinyl on the DJ-driven turntable and even the opportunity for a little dance, Mittelstrasse, 1, 10117 Berlin

Quite simply the best falafel I’ve ever tasted. There’s always a queue here, thanks to its ardent fans (among them a fair few celebs) but it’s worth the wait for the superior falafel and shawarma,

Located in the slightly edgier district of Neukölln, this popular breakfast through to dinner spot (brunch is big here at the weekends with excellent avocado and poached egg) offers fabulous local produce served imaginatively/

Doing what boutique hotels are supposed to do – offer a sense of place (quirky, artsy Berlin), with a sense of humour (press the ‘Butcher Bell’ in your room and you get straight through to the kitchen), and a sense of luxury (great beds, guys). Doubles from €122.

Fiona Sims is an award-winning food , wine and travel writer and writes regularly for the Times among other publications. Her trip to Berlin was hosted by Cell Restaurant