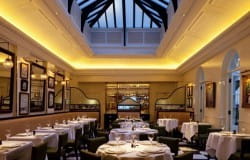 I have to admit I didn’t eat there in ideal circumstances, with the edge taken off my appetite by a caviar tasting (first world problems . . . ) but food wasn’t really the issue.

For a high profile opening - and a Thursday night - the room was strangely empty and lacking in atmosphere. We later spotted that there was a terrace outside where several diners had been eating on an unseasonally warm September night and a full private dining room downstairs. It’s still early days for the restaurant so maybe they didn’t take as many bookings as they might have done? Or maybe it’s just not a great site (at the bottom of St James’s Street) which could be more worrying for new owner Joel Kissin who formerly worked for Terence Conran and should therefore know his oignons.

He should also know how to train his staff. Our rather flappy and over-effusive waiter was clearly of the school that thought it strange for a couple of women to be dining on their own and therefore that we had to be incapable of choosing our wine. Which was ironic as he clearly didn’t know his own wine list, offering me a glass of St Chinin (sic) which was only available by the bottle rather than the (perfectly nice) Minervois ‘Cuvée Orlic’ above it which was listed by the glass.

Staff hovered to whisk away our plates the moment we’d set our cutlery down meaning we got through a three course meal in an hour and a quarter. Hardly relaxing. 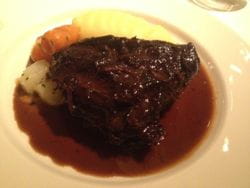 That said, the food - or my food at least - was very good. Given the caviar episode we stuck to salads to start with: my nicely conceived artichoke salad with fennel, tomatoes and preserved lemon being way more interesting than my companion’s (the other Fiona) endive, French beans and Per Las blue cheese which was significantly short of beans.

They were frustratingly already out of the plat du jour - “chef ‘ad to send the rabbit back”, according to The Deeply Annoying Waiter but a huge hunk of dark sticky daube of beef* with mash and beautifully cooked carrots and turnips more than compensated (and was very good with the Minervois). Sorry the photograph's crap, I know. Taking pictures of braised meat in low light is never a good idea but I wanted to give you an idea of the size of it.

The other Fiona had grilled wild seabass with fennel which she thought was marginally overcooked but, being more conservative about my fish, I thought was fine. 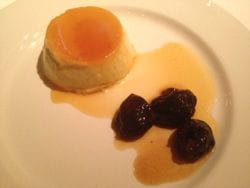 I also fared better with my dessert, a fabulously wobbly Sauternes custard with the consistency of a crème brûlée, served with Agen prunes in armagnac. In normal (non-caviar) circumstances I’d have ordered a glass of Sauternes at a pretty reasonable £10.85 to go with that. Fi’s rather solid lemon cheesecake, an odd inclusion on a menu that also featured lemon tart, was less impressive.

There were some other appealing dishes on the menu, especially the game (wild pigeon, girolles, lardons and kale would certainly ring my bell) but if you’re not careful it would be easy to rack up a significant bill - unless you go for the well priced pre- or post-theatre prix fixe at £19.50 for 2 courses which happily includes the daube.

The main problem for Boulestin though is that there’s a lot of competition if you feel like a French meal at this level including Brasserie Chavot just off Bond Street which has just picked up a Michelin star. Despite the quality of the cooking it doesn’t have enough going for it as a restaurant experience to make me want to go back. Except possibly for that custard . . .

London's leading critics seem divided on the restaurant. Read Jay Rayner of the Observer's review here and Nick Lander of the FT's here.

I ate at Boulestin as a guest of the restaurant.