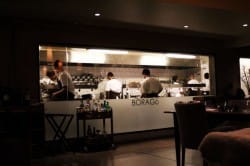 "Rodolfo Guzman, the young chief at the pass, was out foraging in the Atacama Desert to the north of Chile when I arrived for supper. The sizeable team, chaperoned by the even younger sous chef, Shannon Martincic, who I had mistaken for a stagiaire, was running on its own steam and to a good rhythm.

From what I gather, Guzman was with a group of international journalists. Entertaining scribes seems part and parcel of culinary stardom these days though Guzman hasn't shirked his kitchen duties - assurances were given that the chef had foraged for the restaurant that morning before jetting off.

Guzman trained under Andoni Luis Aduriz at the two-star Michelin Mugaritz in Spain and that education hasn't gone unnoticed in the dining room or the kitchen. Like the menu at Mugaritz, the dishes have a certain unexpectedly playful element about them. And like Mugaritz, Boragó has a development kitchen upstairs where the team try out new recipes between service each day. 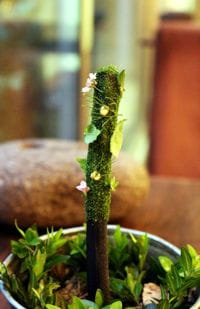 But, that's where the similarities ended as the 10 course Endémica menu (55,000 pesos, about five times the price of an average restaurant in Santiago but reasonable by London standards) is one hundred per cent Chilean, covering every region from high up in the Andes down to the wilderness of Patagonia and out into the icy Pacific Ocean. A bottle of Vigno by Garcia Schwaderer, an old-vine Carignan from Maule, perched to the side. It's instantly recognisable after the previous night's MOVI tasting with Derek Mossman Knapp, flying the flag for Chile's indie wine producers.

Boragó's rocky history echoes the familiar tale of fine dining concepts everywhere – it was barely scraping by until the arrival of the international press. The results can certainly be felt in the Nordic-esq dining room as the flutter of conversation was largely American with a few oriental faces appearing from a separate dining room.

The slow symphony starts with a selection of indigenous ingredients which, after a fortnight in Chile, were familiar stops on the food map.

The challengingly fleshy texture of piure, a mollusc akin to sea urchin, was transformed by way of a bitter mandarin mousse, into something quite delicious. Pickled vegetables, combined with the smoky spice of the merkén chilli, gave a respectable nod to churrasco, the Chilean way of barbecuing.

The playfulness also showed in the loco (Spanish for crazy, above) that appeared half magic wand and half spirit stick. This, a squid-inked bread stick, charcoal black and partially glossed with “moss”, leaves and blossom, was served in a leaf-lined metal pot of coriander seeds. But while the painted end proved tantalising, I wasn't quite so sure what to do with the rest.

Then there were the rocks of Quintay (a seaside town in Valparaíso to the west of Santiago). In a shallow bowl came a small pavé of smoked conger eel, wrapped in volcanic black tempura. Its companion, a large granitic rock, was carefully smeared with an even coating of black farinaceous purée. At the table, a rich, herbal broth, made from a root plant used to teeth babies, washed over the top. To complete the scene, a cumbersome wooden spoon, too awkward to fit between the rock and the bowl, was the instrument offered, ensuring minimum dining sophistication. The joke was definitely on me – how long should one wait before requesting a real spoon?

The subtle smoke and delicate texture of the conger eel made fine feasting though, especially with the Casa Marín Lo Abarca Pinot Noir 2010 that Diego, the sommelier, poured to match. 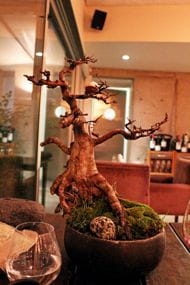 It's never just about the food of course. There's a certain element of visualisation too, of the Chilean terroir. A nectar-centred quail's egg, slotted into a dehydrated mushroom nest, balancing gingerly on top of the fine branches of a stripped bonsai, painted a picture of a bird's nest out in the desert. A lemony ice cream and wisps of plant-based cotton candy made up the camanchaca (thick fog) and rica rica (a Chilean bush plant) from the Atacama.

And speaking of terroir, the Andes had its salad of wild plants, matched with a dry Zaranda Muscat 2011 from Itata, while the Patagonia offered a venison tartare with a Sol de Sol Chardonnay 2010.

Interestingly, the wine matches (30,000 pesos/£31) weren't always wine as Diego strayed into beer and liqueur too. To his credit, these turned out to be both imaginative and very agreeable.

The dessert of pine mushrooms, a rocher of earthy sorbet resting on sandy, sweet and salty walnut praline and piped droplets of dulche de leche, arrived with a small glass of Granizo pale ale. The bitterness of one found complemented the earthiness of the other.

Chile's national aperitif, the Bitter Araucano, a prickly, liqueur version of cola, was the memorable last pairing. Paving the way was an equally testy bitter chocolate ganache, infused with hawthorn.

Travelling the length of the polarising landscape of Chile on the Endémica, some 20 morsels and bites had elapsed since we began the journey three hours previously. The menu had inspired, challenged, mocked and left plenty to reflect on.

The final gong, a minty, nitro-cooked meringue in one bite, was the perfect glacial rendition of After Eights. Like breathing in the pristine air of the Andes during the first break of spring, it was cooler than cool."

Qin Xie is a food, drink and travel journalist and photographer. You can find her website here.