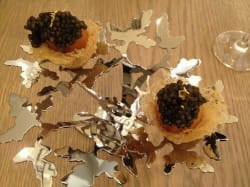 It says a lot about the man’s genius for grabbing headlines but not much about his cooking which is far more subtle and less gimmicky. Not that there weren’t other surprises in our 16 course tasting menu which featured oysters, caviar, foie gras (for those who eat it), lobster and Wagyu beef.

The standout ones for me were ‘Bed and Breakfast’ - a mouthful of crisp-coated, gooey, smoked quails egg topped with caviar, ‘Cloud’ - mackerel tasted through a cloud of rose-scented smoke (stunning), a tomato-flavoured marshmallow - a summery mouthful of tomato-scented air - and a simple cube of Wagyu beef served in an intensely savoury broth with two potato and chive tortelloni-shaped dumplings. Not since Heston opened The Fat Duck has the UK seen such startlingly original food. 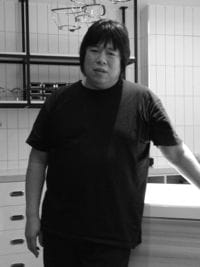 Leung, who is much less shouty and more thoughtful than his public persona suggests - he calls himself ‘the demon chef’ and dubs his cooking Xtreme Chinese - has obviously given a good deal of thought to working in British references. In fact there’s a whole menu of them in the 14 course ‘Ode to Great Britain', a slightly cheaper option than our full tasting menu . I wasn’t mad about his steak and kidney dim sum which suggested he probably hadn’t tasted a good version of the original but a deeply savoury course of Toad in the Hole he gave us to try - a Yorkshire pudding-like dumpling served with bone marrow and a frogs leg - was the biz, especially with a glass of 2006 Margaux.

His pairings were actually spot on, in fact. Although we’d talked before the meal of the difficulty of finding wines to match so many disparate flavours and textures (champagne he reckons is probably the best wine to drink if you’re sticking to one bottle) he produced some wines that were totally delicious with individual dishes. A 2009 Vincent Girardin Meursault, for example, was fantastic with an umami-rich dish of dried shrimp, wild mushrooms, tomato and noodles (not unlike an Italian seafood spaghetti) and a rich dish of butter-poached lobster and roasted corn despite it’s spicy Sichuan kick. A Ruinart blanc de blancs champagne was pitch-perfect with the Bed and Breakfast and Cloud. 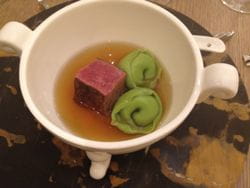 Inevitably not everything hits the mark. A riff on the classic Chinese soup dumpling xiao long bao, where the soup appears to have been jellifed and served on the outside of the dumpling, was a bit weird and I could take or leave the rather bonkers hawthorn bubble tea which you suck up through a straw from a test-tube. But there were also some surprisingly conventional dishes - some great savoury rice and a wicked version of banana fritters made with fried condensed milk that were just plain delicious.

There are aspects of the restaurant that are pretentious. Many courses are served on outlandish dishes - or constructions - that have been designed by Leung, a former engineer. A strange contrast to the rather utilitarian decor and furniture which gives the ‘chefs’ table’ area of the back of the restaurant the feel of a staff canteen. And the music - a ‘best of the 60’s’ round up including Cilla Black’s Alfie - is dire though since Leung thought so too I expect that will have changed by the time you read this. 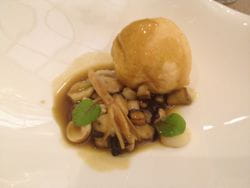 But the main problem is the cost. At £138 without wine - barring Gordon Ramsay's flagship restaurant at Royal Hospital Road, I think, the most expensive set meal in the city - you could easily be presented with a bill of over £200 a head which must limit the clientele even in London. HIs neighbour Claude Bosi charges ‘only’ £105 for his tasting menu at Hibiscus.

But you can eat at Bo more cheaply at lunchtime if you want to get a flavour of his food. A fixed price dim-sum lunch costs £30 or £35 with a dessert. Otherwise bite the bullet, take care what you order from the wine list and console yourself with the thought that it’s cheaper than flying to Hong Kong . . .

* the condom is made out of algae, its contents from condensed milk and the sand is like a smashed digestive biscuit. Not unpleasant if you can get the original out of your head . . .

Actually I did check and confusingly there is a more expensive menu than the prestige one - the 'seasonal inspiration' at £185. So Gordon is the priciest!

Hi Fiona. Interesting review of what sounds like an interesting restaurant, but not one I'm likely to visit. Just one little thing: Gordon Ramsay is £125 for Menu Prestige at the moment, so Bo has him beat. I hope he has many customers with very deep pockets! 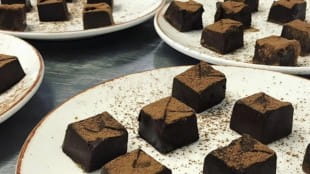