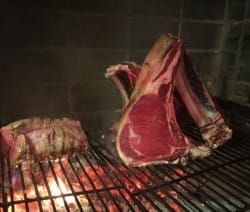 A large painted polystyrene cow proclaims the entrance and there is Dario himself (if you’re lucky) beaming menacingly. The side counter of the shop is stacked with lardo-clogged rillettes smothered on crostini and steak-thick slices of fennel sausage for you to graze on. There’s a fleeting glimpse of the cool room with carcasses even bigger than Dario himself then you’re led through a secret door to a dining area upstairs with an open fire, a long shared table and MEAT. SO much meat. 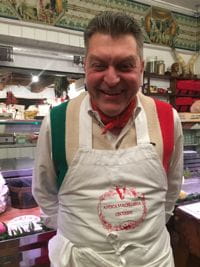 Dario’s sidekicks start to slap it over the coals while the maestro wanders around roaring, blowing a horn, occasionally bursting into song and slicing up the choicer cuts himself. It’s a steaklovers dream: Chianti crudo (chunkily cut beef tartare), carpaccio di culo (seared rump), costata all fiorentina (strip steak), bistecca Panzanese …. The meat is just the rare side of blue. A plate of choice pieces of fat is handed round…The beast we’re eating is a Chianina, one of a herd of rare cattle reared by our host Giovanni Manetti of Fontodi. Given that it’s seven years old and aged for 46 days you do feel you should treasure every morsel.

We’re thankful for a gigantic bowl of raw carrots, celery, fennel and onion on the table which bring some light relief from the protein. There’s also a bowl of beans, swimming in olive oil and a baked potato to anoint with yet more fat. Surely there can’t be any more meat but then another fanfare and “fi-OR-en-TINA” and Tuscany’s most prized cut comes out. I can barely manage a mouthful. I swear never to eat meat again* 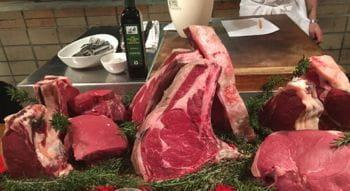 For the amount of food you get the set price of 50 euros (just over £40/$57) is ridiculously cheap especially when you can bring your own wine, in our case a 1990 Fontodi riserva they no longer make (though I feel the more vivid 2006 Flaccianello works better with such rare meat),

How a tiny butcher’s shop became such a mecca for meatlovers is a tribute to the personality of Cecchini, a man who you won’t be surprised to hear goes down well in Vegas. They should give him TV show. Man vs Beef. Dario would obviously win.

*although somehow I managed to the next day. This is Tuscany, after all.

Macelleria Cecchini is at 11 via XX Luglio, Panzano in Chianti and is open every day for lunch at 1pm and dinner at 8pm. Reservations advised. Tel: 39 055 852176