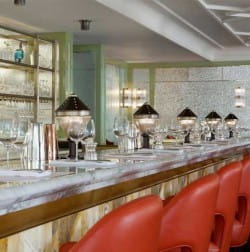 The trolley - which is made in New Cross of all unlikely places - is the centrepiece of 45 Jermyn Street, department store Fortnum & Mason’s glitzy new in-house restaurant which has taken over from the somewhat staid Fountain. It’s entirely typical of the company’s flamboyant CEO Ewan Venters, a Willy Wonka-style impresario who has brought a touch of indulgent playfulness to this venerable London institution (and apparently taken profits from £300k to £3.8m a year in the process.) 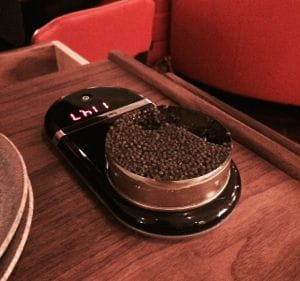 If you succumb to the trolley you can choose from oscietra or beluga caviar at £3.20 or £6.70 a gram respectively - which also buys you some mini baked potatoes, sour cream, toast, chive blinis (a little rubbery) and a soft mass of scrambled eggs which are expertly stirred at the table by the maitre’d. (I asked him if he called himself the caviar sommelier but apparently not. I’m not sure he’d quite bargained for his scrambling duties.) I’d say you need rather more than the minimum 10g of caviar you're required to order to balance the extras - more like 20g which would make it expensive unless you go for the Siberian sturgeon at £2 a gram but Fortnum's has never been about belt-tightening. Add a glass of champagne at £12 and service and you’re looking at around £70 a head. 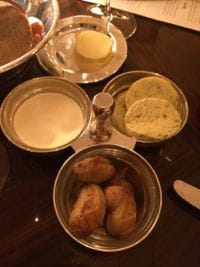 There are cheaper options - and despite the presence of main courses such as Dover sole and the rather delicious rich, buttery spaetzle (German-style pasta) with lobster I had after the caviar I think this is the kind of place to pop in for a drink and a dish - a late breakfast, a high tea or an after-theatre supper rather than a three course meal. I was going to say it’s the kind of place to take 10 year olds for a half term or holiday treat but discovered the coupes and floats I thought were tailormade for tinies contain a fair amount of booze. This is a place is for grown-up kids.

What you’re paying for at 45 Jermyn Street is good old fashioned glamour. It’s all smooth squishy orange banquettes and subdued flattering table lights*. If you're not on a caviar budget you could drop in for breakfast for about a tenner to eat what I’m sure would be a pukka bacon sandwich or an egg-topped marmite crumpet and a pot of tea. I might well do just that.

*which aren’t quite brightly lit enough, note powers that be at 45, to illuminate the menus for those of us who are short-sighted. Bigger print or a bolder font please.