My heart usually sinks when I’m recommended an Asian-fusion restaurant in France. It generally means a mishmash of dishes devised by a chef who’s never set foot on the continent.

Or who insists on putting a fussy Gallic spin on the food, presumably in the hope of winning a Michelin star.

But a friend I trust recommended Mampuku and another winemaker friend had invited me there so who was I to quibble?

My fears were immediately allayed on walking through the door. This is a sophisticated space - all curving contours and blond wood with a modish open kitchen along one side.

There is a concept but (thank God) our friendly waitress didn’t feel the need to explain it. You order four or six dishes between you (at 25€ or 32€ per head). Out of sheer greed and inability to make up our minds we ordered six but four would have been enough. And, hallelujah! - they were served one by one in a logical order instead of all arriving at the same time. 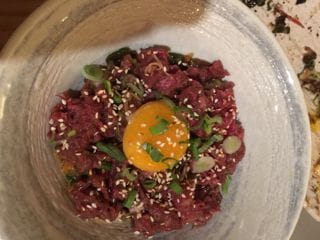 We kicked off in Asian mode with osakayaki - a take on okonomiyaki with authentically fluttering bonito flakes, punchy ginger puree and cebettes (spring onions/scallions) and an exceptionally good hand-chopped korean-style steak tartare with black garlic. Then Vietnamese pancakes with a punchy filling of pork with oyster sauce, with crisp lettuce leaves to roll them in and dunk into an accompanying dipping sauce. Messy but tasty.

Bao buns made with brioche dough were a clever idea but the filling was a little lacking in punch. The sweet-flavoured, seared scallops with shitake and shimeji mushrooms in an umami-rich sake broth that followed was a much better course (albeit at a 2€ a head supplement). But best of all was what amounted to a Moroccan meatball pie - deliciously light aromatic meatballs with chickpeas under a fluffy sesame flatbread lid that went incredibly well with the friend’s medium-bodied merlot-dominated Bordeaux red.

Desserts were a little half-hearted by comparison and are not I feel their strongest suit though they are included in the price of the menu. The pastry in my knafeh with poached pears was too soft and the pears too hard but it did work quite well with the Sauternes my friend had brought along. And it has to be said he demolished his Gen Mai - grilled rice ice-cream with a chocolate brownie - without too much trouble. 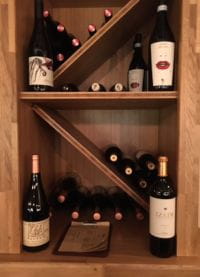 As he had brought his own wines (a privilege afforded to local winemakers so don’t get the idea that this is a BYO) we didn’t dip into the rather engaging and eclectic winelist which includes wines from Canada, Morocco and Israel as well as a wide choice of sakes which are available by the glass

If you’re staying in Bordeaux for a few days and tire of French food Mampuku is ideal. I’d be more than happy to go again. Expect to pay about 30-35€ a head for food.

Here's Le Fooding's review (in French) if you want another take on it.

You know I don't get out much, Steve ;-) Anyway your wish is granted. Hope you enjoy Jikoni!