Since Nigella devoted the best part of an episode of her current TV series and a wonderfully discursive chapter of her new book Cook, Eat, Repeat to anchovies* you may have been inclined to give one of her recipes a try, particularly the sublime anchovy elixir. But what wine should you drink with them?

Chilled Manzanilla sherry is one of my favourite drinks at this time of year so I was impressed to come across this great value, full-size bottle at the Booths Christmas in July* tasting last week.

Sushi is possibly not the first kind of food you’d think of pairing with wine but turns out it’s surprisingly good with sherry.

Manzanilla sherry never fails to surprise me with its versatility but you don't often come across a combination as good as the one I had last week at Lido restaurant in Bristol.

Last week I was in Sanlucar, the Spanish town in the south of Spain where they make manzanilla, so what else could my match of the week be but a sherry? 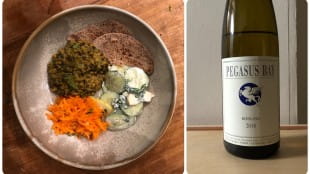