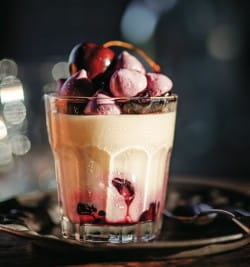 It might seem perverse to choose a dessert from a barbecue book* but the Pitt Cue Co crew are as good at trashy desserts as they are at meat. And you need to finish off your BBQ somehow, don't you?

You might not think of putting cherries in a salad but it can work wonderfully well as Sarit Packer and Itamar Srulovich of Honey & Co demonstrate in this clever twist on a tabbouleh from their most recent book Honey & Co: At Home.