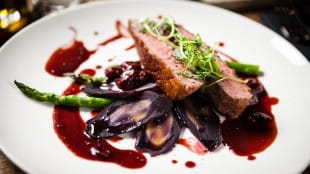 What wine should you pair with duck breast in damson sauce?