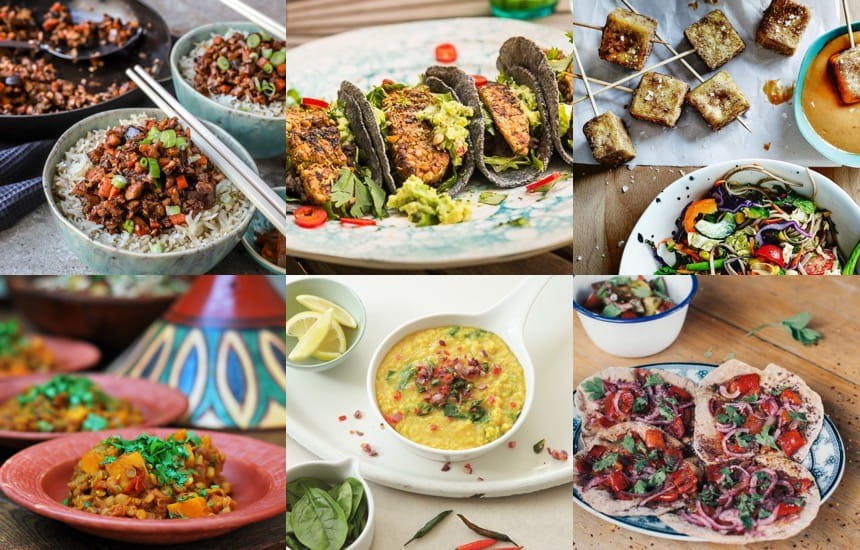 Last year, Veganuary reported a 183% increase in participation in 2018, with over 168,000 people pledging to go vegan during the month of January (and record numbers have already signed up this year). It’s interesting to note that almost half of these people consider themselves “omnivores”, while only 17% are strict vegans and the rest vegetarian or pescatarian. It points to a growing trend amongst the general population – not just vegans – towards eating less meat.

Our reasons for eating less meat are myriad – health concerns, the environment, animal welfare – but almost all can agree that taste will help usher in more plant-based eating. Those “pulled jackfruit” burgers might be tasty, but such imitations can often leave people longing for the real thing. If you want to create a vegan meal that won’t leave carnivores feeling like something was missing, then look to world cuisines that naturally lend themselves towards vegetarian fare. Think India, Mexico, Morocco, and Japan, places where vegan staples (pulses, tofu, vegetables) have been embraced for centuries. These cultures have it figured out!

For inspiration, we’ve collated six delicious and satisfying recipes that prove vegan dishes can stand on their own.

Indian food has to be one of the ultimate vegan options out there, with many dishes – particularly those from Kerala – being inherently vegan or vegetarian by nature. A great starting point is dal, a generic word for pulses, typically made with lentils and for which there are endless variations. A great starting point is Jenny Chandler’s Tarka Dal, a classic recipe that’s very easy to make. Serve with rice and greens for a hearty, wholesome meal. And always make extra as the leftovers are superb and it freezes beautifully, too. 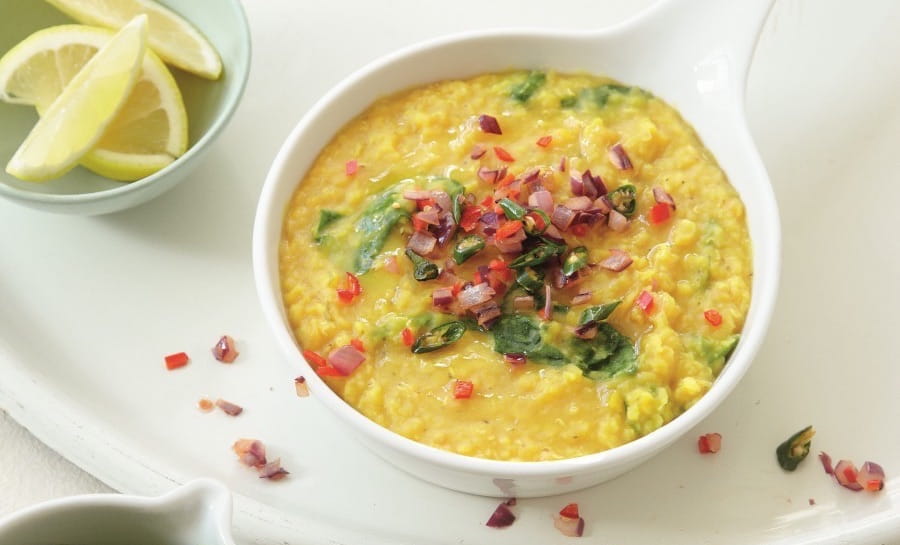 This recipe is from Super Pulses: Truly modern recipes for beans, chickpeas and lentils by Jenny Chandler published by Pavilion Books. The book is a lexicon of bean and lentil inspiration. Many of the recipes are vegan or vegetarian, but it also includes meat and fish recipes, too. This is a great book for those who might not want to cut out meat completely, but certainly find ways to cut back, or augment their meat dishes with more pulses and plants. (Image credit: Clare Winfield)

Moroccan tagine works brilliantly as a vegan dish and can be made with all manners of pulses and vegetables. Vegetarian chef Erin Baker uses pumpkin and lentils in her vegan tagine, but you could easily add other seasonal vegetables. This is the ultimate winter warmer. 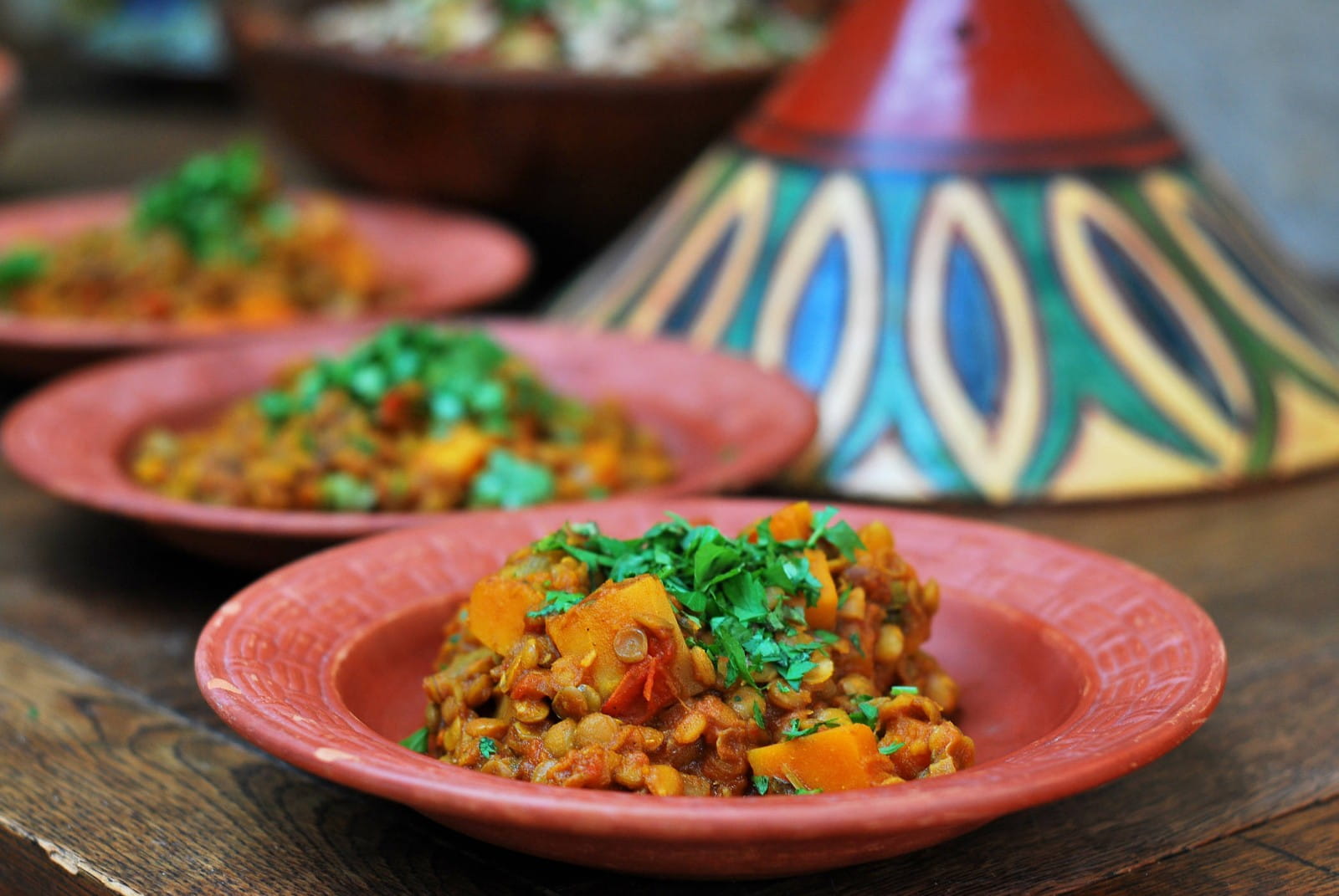 Erin Baker runs The Natural Cookery School in the Cotswolds and has just released The Veg Table, a vegetarian cookbook focussed on world recipes. It’s highly approachable – lots of complex flavours but quite straightforward recipes that are ideal for everyday cooking. (Image credit: Michael Ruggier)

If you haven’t tried tempeh then it’s time to get on board with this uber healthy fermented soy product that’s full of protein and a sponge for flavour. Tempeh works particularly well with sweet/smoky flavours and has a heartiness that is enormously satisfying. Marinade is the key, and it’s worth leaving ample time to ensure your tempeh is allowed to soak up whatever flavours you throw at it. Try this Mexican twist on tempeh from Demuths Cookery School.

Demuths Cookery School offers vegan cookery courses at all levels in the city of Bath. Their website includes a huge recipe database of beautiful vegan recipes so if you can’t make one of the course, you can easily make their recipes at home. (Image credit: Rob Wicks)

Elly Pear has created a vegan version of chicken nuggets using smoked tofu. They are “ridiculously delicious”, particularly when served with satay sauce. Perfect as party food or served with rice and veggies for a tasty and nutritious supper. 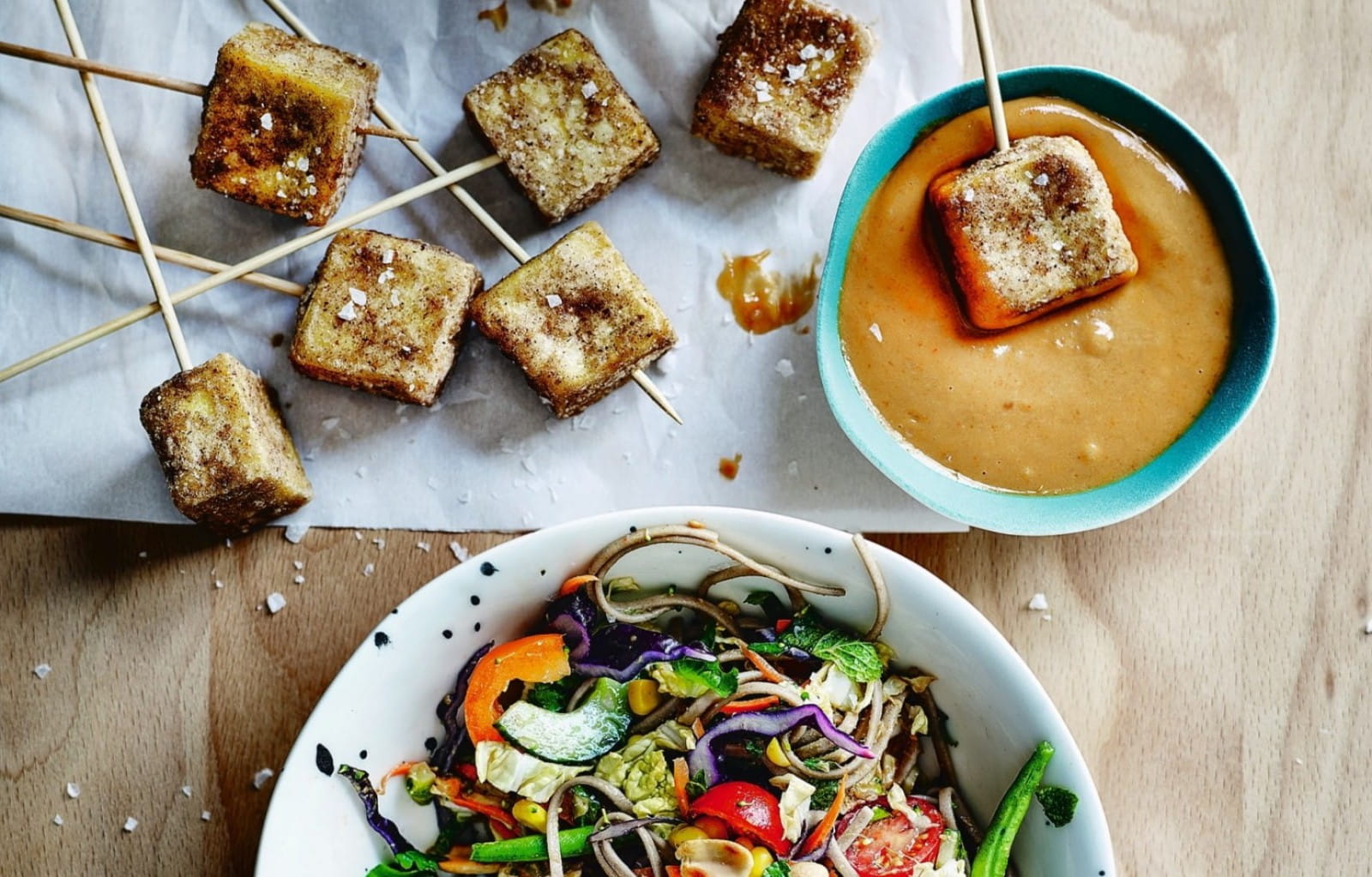 Everybody loves pizza, and whilst vegan mozzarella does exist, lovers of the Buffalo kind will be sorely let down. Instead, turn to these Frying Pan Turkish Flatbreads from Anna Jones where cheese isn’t part of the equation. 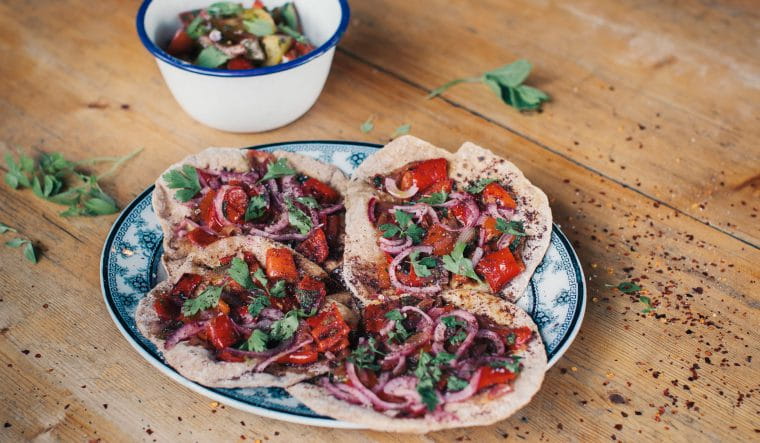 Bulgogi literally means “fire meat” and is usually made with beef. The secret is in the sauce, a salty/sweet/savoury concoction that happens to also work really well with vegetables. Kellie’s Korean Vegetable Bulgogi is her vegan take on this dish, using aubergine, mushrooms, and walnuts to give a “meaty” minced beef texture and some seriously hearty comfort food. 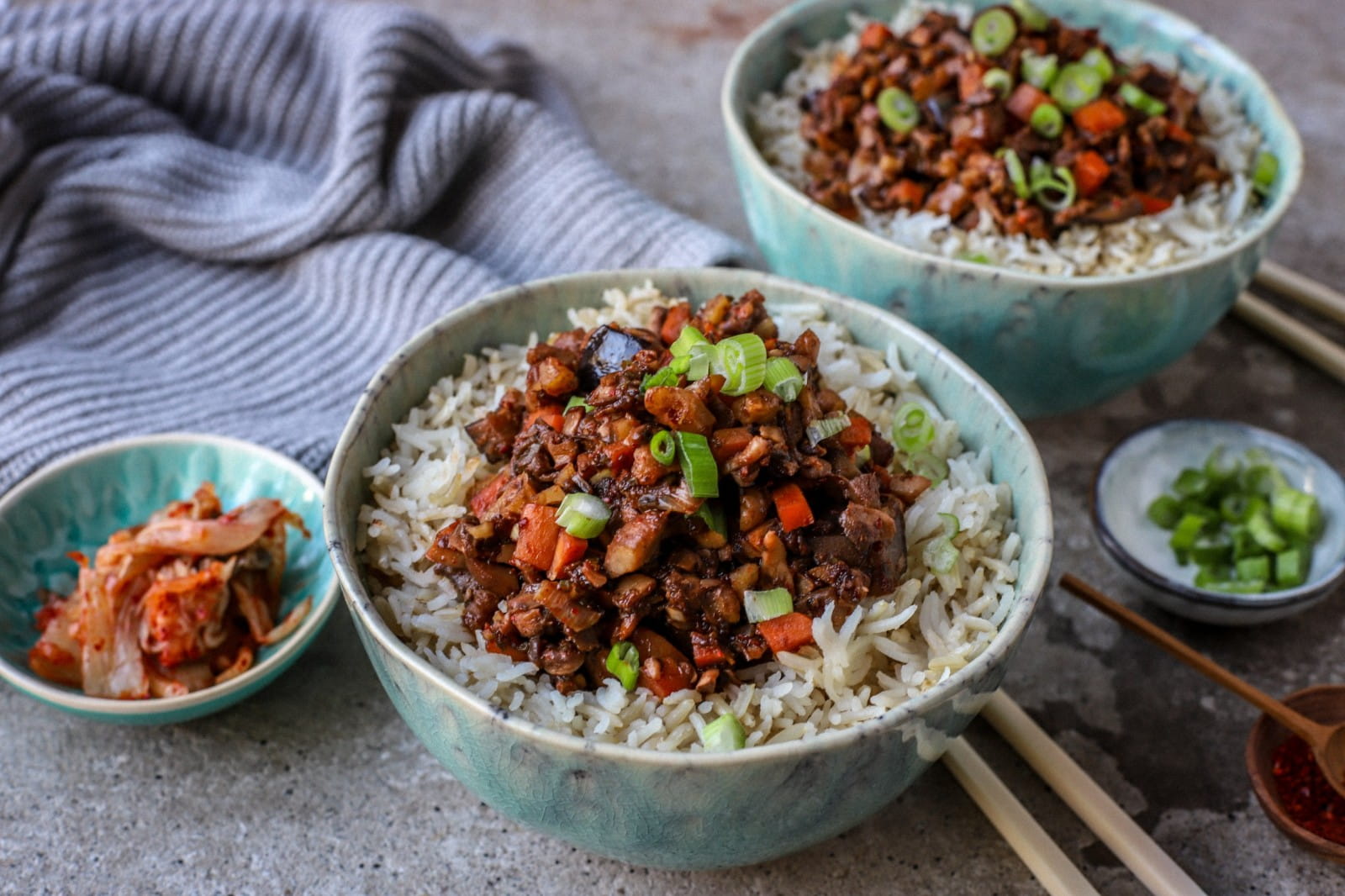 Kellie’s website Food to Glow is loaded with vegan global food recipes like this, so worth a browse if your particularly after big flavours and lots of colour. (Image credit: Kellie Anderson) 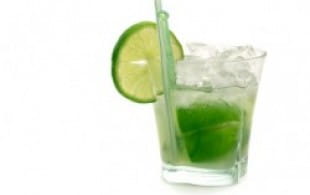 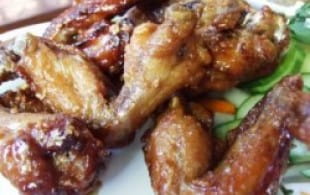 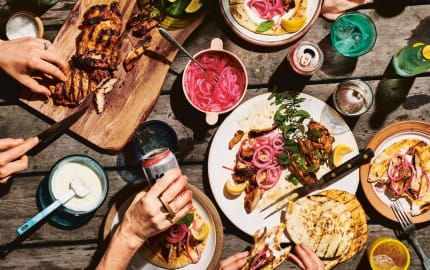 Spiced, Grilled and Swaddled Chicken Thighs with the Works 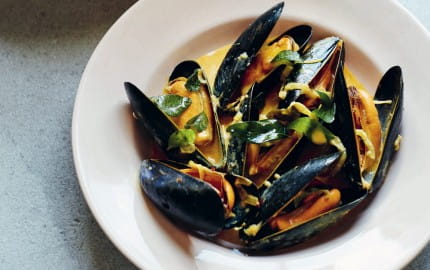