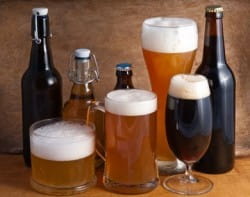 Many went for the nearest the beer world has to offer - a celebratory ale: Adnams Sole Bay in the case of Adrian Tierney Jones (@atjbeer), Deus (@hautcedre) and Malheur Brut - the choice of beer writer Pete Brown (@petebrownbeer)

Others felt strongly it should be a local beer from a brewery they already patronise. As Chris King of @NorthernWrites aptly put it “something you love, something you know. Amount of times I’ve saved a big bottle for NYE and it’s been naff/drain pour” while beer writer Melissa Cole @melissacole clearly had her eye on going down her local. “Doubtless something by London Brewing Co @Bull_Highgate”

Of the beer styles available stout and imperial stout were popular as perhaps more surprisingly was gueuze though there was, of course, a contingent which favoured hugely popular IPAs and pale ales.

And my own choice? Most probably @wildbeerco's Ninkasi (along with beer bloggers Boak & Bailey) though I do have a couple of handsome full-sized bottles of Italian beers (below) from Mastri Birrai Umbri which we didn’t get round to on Christmas Day - a doppio Malto and a Birra Speciale Rossa which I’ll report back on when we drink them. 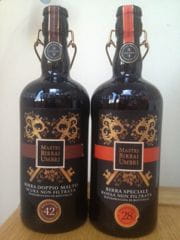 @petedrinks Will definitely be having some of my own Coffee Porter, to start but for midnight, I might crack open a @HarviestounBrew Ola Dubh 30 :)

@rhodeshannah I'll be indulging in a mini keg of Jarl from @fyneales. Followed by some fine German Bock Beers from Pyraser and Greif Braueries. I'm sticking to what I know and like. Some big celebration beers sometimes leave me cold and make me go 'meh'.

@BeersIveKnown I'll probably have some Ninkasi and I've a Moor Beer Fusion I want to drink too.

@Natedawg27 I've got Bear Republic Big Bear Black Stout lined up for NYE consumption although I am actually tempted to open the 04/05 Brooklyn Black Chocolate Stout that a friend gave me!

Boak and Bailey if we go to the pub, it'll probably be Blue Anchor Spingo Middle. Otherwise, we've been saving a Wild Beer Co Ninkasi.

Alistair Gilmour @cheerspal Mikkeller Yeast Series Lager (6.4% abv) and a dram. Because I'm worth it.

@ragazzadeltreno If I was having a really special bottle of beer, it would have to be an oude gueuze mariage parfait from a great brewery.

@didsthewinegeek One that turned my head this Christmas was Copperhead by the Belfast Brewery. Fruity and refreshing.

@pinkandtweed something dark & strong. A stout from @PartizanBrewing I reckon.

@PJ Cantillon Lambic or a Boon Old Gueuze, perhaps. There will be Imperial Stout involved at some point too :-)

@melissacole Doubtless something by London Brewing Co @Bull_Highgate. Although if I could drink it over again, 2005 Chimay Grande Reserve I had w/Christmas lunch

@petebrownbeer got a very special bottle of Malheur Brut looking all nice and shiny!

@vinestead Am pretty lucky to have @WestBerksBrew and @LooseCannonBeer both local. Couldn't do much better than that.

@markdredge Good question... I haven't thought about that yet! Probably a can of @camdenbrewery Hells then something special after.

Other beer-lovers what are you planning to drink? Tell me and I'll add it to the list!

If you're wondering what to eat with all these delicious beers here's a menu for a New Year's Eve Beer Dinner with recipes from my book An Appetite for Ale. 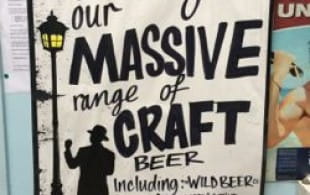 No doubt we'll be enjoying the classics first - Old Empire (for hubbie) and Owd Rodger (for me), before it's off out to the local Pub for a selection of well tended CASK ales from across the midlands. Traditionally British and well balanced

I'll be indulging in a mini keg of Jarl from @fyneales. Followed by some fine German Bock Beers from Pyraser and Greif Braueries. I'm sticking to what I know and like. Some big celebration beers sometimes leave me cold and make me go 'meh'.