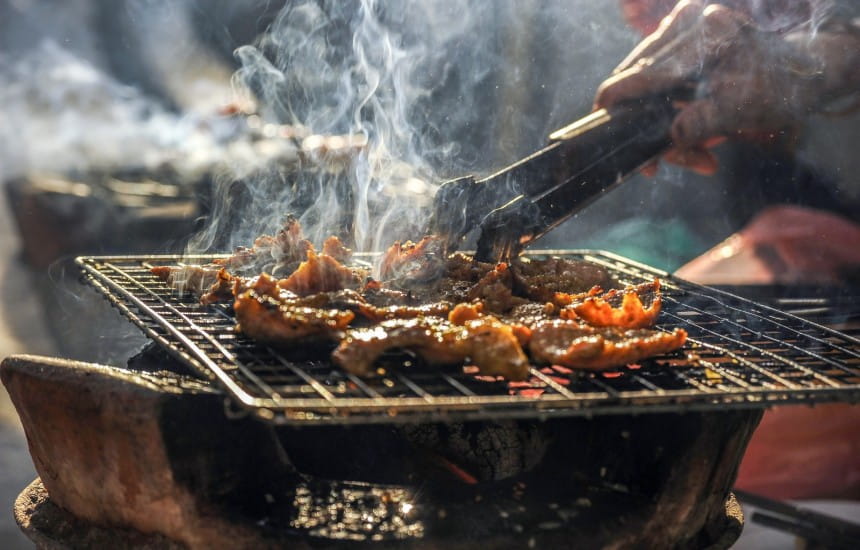 It’s a sign of the times that the latest recommended food matches for Bordeaux are with barbecued food. On the face of it it’s not the most obvious pairing but of course Bordeaux is not just top growths, or simply red for that matter, any more than barbecue necessarily involves large hunks of meat slathered with barbeque sauce.

The mere fact of cooking over coals doesn’ t create problems for wines. It simply gives the ingredient - fish or meat - a charred edge which possibly calls for a wine with more intensity but no different in essence from one you’d chose if you’d pan-fried the meat or cooked it under an indoor grill.

It’s only once you start marinating your base ingredient, adding a rub or serving it with a sauce or when you serve several different barbecued foods together with a selection of strongly flavoured salads, as is so typical of many British barbecues, that you can run into difficulties.

The main issue is which way to go - to match power with power or go for a more refreshing option - the vinous equivalent of a beer. There are supporters of both points of view, depending on the style of barbecue. US 'master griller', Steven Raichlen, author of the best-selling ‘Barbecue Bible’ cookbook series says that with classic American barbecue recipes such as Texas style brisket or North Carolina-style pork shoulder that acquire a smoky flavour from being cooked over an indirect heat you need a ‘bulldozer of a wine’ such as a Zinfandel or a Shiraz. “You could drink a really beautiful St Emilion with a chargrilled steak but not with smoked brisket”. Pieter Ferreira of Graham Beck wines agrees. “Personally, I feel the bigger and bolder the wine is the better. With meaty barbecues a bold Pinotage will work wonders.”

On the other hand fellow South African, Oscar Foulkes, the winemaker at Cloof reckons that “something cold and flavourful such as Sauvignon Blanc or rosé covers a multitude of sins. Apart from the refreshment the freshness of the wine brings some levity to the palate” while Jerry Comfort of Beringer, an expert on food and wine pairing, opines that the “classic sweet/sour/spicy style (of barbecue) is best with fruity off-dry or dry whites like Riesling and Sauvignon Blanc, white zin or a high acid, aromatic Pinot.”

Obviously it partly depends on your base ingredient. If you’re grilling seafood, for example, a fruity white might well be welcome. “At the beginning of a barbecue I often hand round hand round a glass of Mosel riesling or if I’m grilling a few clams with garlic and parsley butter I might offer a Sauvignon Blanc” says Raichlen. But it was surprising how many people I spoke to spontaneously mentioned other whites such as Viognier or Chardonnay which can deal with both the charring and the sweetness of many barbecued foods as good all-round pairings. It bore out a recent thread on NY Times wine writer Eric Asimov’s blog The Pour in which many winelovers confessed their growing preference for white wine.

Rosé too has a useful part to play at barbecues, especially the new stronger, bolder styles that have become increasingly popular over the last couple of years - wines such as Charlie Melton’s Rose of Virginia or even Bordeaux rosés such as Chateau de Sours. Their advantage being that they have both the full-bodied fruit and sweetness to cope with the smokiness and spiciness of many marinades as well as the crisp, refreshing acidity of a white wine. They also, unlike many reds, work well with Asian flavours. And, of course, they’re normally served chilled.

Modern fruit-driven reds can do a similar job. Jerry Comfort suggests a “big but soft shiraz or Zin” , Peter Ferreira of Graham Beck, a Pinotage. What you really don’t want though on a steaming hot day is some 15% tannic red served at the ambient temperature which could well be 25-30 degrees Centigrade. Bringing the temperature of bigger reds down to 18 degrees certainly helps them to retain their freshness. “I have been known to drink chilled red or - don’t tell a soul - red wine with a few cubes of ice which you can do because our reds are so concentrated” says Oscar Foulkes of Cloof.

A cool serving temperature is one reason why beer works so well with barbecue but palate-cleansing carbonation also plays a part which should lead you to consider sparkling wine as another option. Many, admittedly, are too light and dry but, again, the new generation of fruity sparkling rosés and sparkling reds like sparkling Shiraz can also be a good all-round match as, of course, can sparkling wine-based cocktails like bellinis.

Steven Raichlen also prompted me not to overlook grilled desserts, an opportunity to enjoy a fine dessert wine at the end of the meal. “In the US we cook a lot of desserts on the grill - grilled pineapple and peaches or a gooey confection of flame-toasted marshmallow, chocolate and graham crackers called s’mores (so good you have to have some more of them). With these a Moscato d’Asti can be great.” (The Bordelais will be delighted to hear that Raichlen considers sweet Bordeaux a good match for some savoury barbecue preparations too which figures when you think about the level of sweetness in many dishes.)

My own view is that the best approach to wine and barbecue is to structure or theme your event in some way rather than serve the hotpotch of different meats and salads at least one of which is bound to clash with the wine you’re serving. A selection of grilled seafood followed by steak or a butterflied leg of lamb would enable you to follow the conventional pattern of option of white followed by red.

There’s a lot to be said too for the ‘terroir’ approach: serve the same wine as the locals would with a similar dish. Look at the great barbecuing nations and think what they drink. Zinfandel with ribs. Malbec with an Argentinian-style steak with chimichurri salsa. Pinotage with a South-African style braii. Sake, with Japanese-style or even Korean barbecue. Just don’t mix it up if you’re serving serious wine.

What to match with different marinades and rubs

“The spicier the rub, the sweeter or more acidic you want your wine to be” James Lehman, chef Ironstone Vineyards

This article was published in the August 07 edition of Decanter