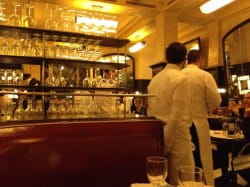 If you’re the kind of sad, unreconstructed Francophile (like me) who thinks French food has gone to the dogs head not for Eurostar but the newly opened Brasserie Zédel in London’s West End. Housed in the late and not-much-lamented Atlantic Bar and Grill near Piccadilly Circus, it occupies a huge subterranean space which has been decked out at eye-watering expense in full fin de siècle style.