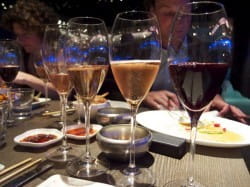 Lucy writes: The idea of pairing rosé Champagne and dim sum sounds encouraging. Dim sum usually involves a range of textures and flavours – some very powerful, such as garlic and chilli. As a table wine (ie without any sparkle), dry rosé can be a versatile choice (think how adaptable it is with tapas) and as a sparkling rosé and Champagne in particular, the effervescence has a refreshing and uplifting effect on the palate and it offers a great sense of occasion.

Recently I had the chance to explore this combination at a lunch organised by Bollinger at Yauatcha restaurant in London’s Soho. We were served a selection of vintage rosés. All delicious on their own, but some more successful with the food than others.

We started with La Grande Année Rosé 1995 (magnum) with Chinese chive and prawn dumpling, crystal dumpling wrap, and scallop shui mai. The 1995 had a brick tinged salmon colour and complex aromas of wild strawberries, honey and cream, finishing with an appetising sweet-sour tang – still surprisingly fresh and youthful, despite its maturity. However, with the food, the complexity was masked. The chive and prawn dumpling worked best, as long as you went easy on the chilli dip.

The second wine was La Grande Année Rosé 2002 – fresh, mineral and more tightly structured than the 1995. This was served with soft shell crab, venison puff, and lobster dumpling. It struggled with the strong flavours, getting a bit lost, although it was a fresh and elegant partner to the lobster dumpling. The more concentrated 1995 was a better match for the sweet meat in the venison puff and the soft shell crab which had a lot of chilli heat.

In contrast, La Grande Année Rosé 2004 had more vibrant youthful fruit that worked better with the food. Like the 1995, it had a tasty tangy quality nicely suited to dim sum, especially the dishes with bigger flavours. The menu continued with steamed wild prawn, Szechuan wonton, baked chicken with aubergine, and egg fried rice with long bean. Steering it away from the spicy sauces, the 2004 was particularly good with the prawn, revealing how well it would go with unadorned crustacea. Lobster would be a deliciously luxurious choice for this wine. 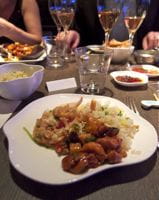 As a curiosity, they also served the 2004 and 2009 vintages of their Pinot-based red, Côte aux Enfants. At Bollinger, about 5 percent of this well-coloured, silky wine is used to create the rosé (theirs is a blended rosé, rather than made using the saignée method). The 2004 was good with the meatier dishes such as baked chicken with aubergine (which had a rich, sticky glaze) and Mongolian style venison, one of the final dishes served. (The 2009 is being released later this year and the 2004 came from their library of back vintages). They were interesting to taste, although for the price, smart red burgundy would be a more tempting candidate.

We finished lunch with strawberry yuzu and Bollinger Rosé (non-vintage). This non-vintage rosé had pretty strawberry and raspberry fruit, but was far too dry for the dessert.

Considering the meal as a whole, as long as you tread carefully with the chilli and garlic, rosé Champagne is an indulgent and versatile choice for dim sum.

Lucy Bridgers attended the lunch as a guest of Bollinger. 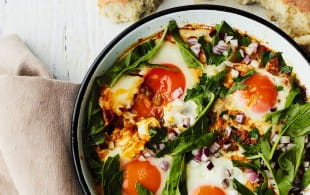 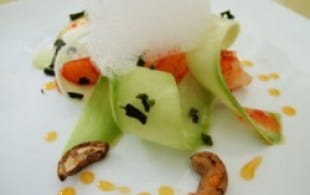 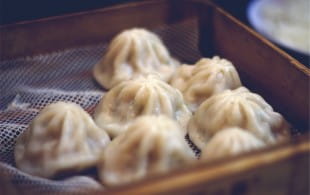 Essays like this are so important to broadening people's horzions.