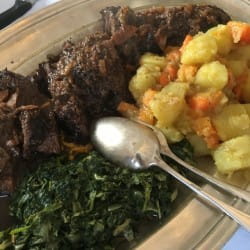 My hosts were a local family called the Corsinis who own a traditional bakery, wine bar and restaurant in the hill town of Castel del Piano, south-east of Siena. All the meals we had with them were without choice. Food came to the table and was served to everyone from large platters, something that is typically Tuscan. I’ve had the same sort of meals when I’ve eaten with winemakers.

The food is simple and rustic, relying on good ingredients rather than great culinary skill. The Tuscans don’t like their food messed about. There is usually a soup based on beans or chickpeas, even in high summer, which may be the first or second course. Always some kind of pasta, often homemade. A main meat course (they prefer meat to fish) which can be followed by various vegetable dishes, a cheese course and a (usually rather creamy or boozy) dessert. Tuscans have a sweet tooth.

At lunchtime, instead of a hot main course there may be a platter of home-cured meats (salumi) such as salami, ham and lardo (finely sliced, aromatized back fat) and preserved vegetables such as cipolle (pickled onions) or carciofi (globe artichokes). But they wouldn't miss out on their pasta.

The one dinner we had together at the Aiuole, just out of town, consisted of what seemed like two very large, light gnocchi, but were in fact known as fiocco di neve or snowflakes - one based on ricotta and spinach ( I think - it could have been chard), the other on ricotta and potato. That was followed by chickpea soup, a pasta dish with aubergine, a dish of roast suckling pig served with a delicious cauliflower dish that was souffl-like in texture (sformato), courgette (zucchini) frittata, roast peppers stuffed with veal and mint and stuffed radicchio. (The number of vegetable side dishes was unusual and due to the fact, I suspect, that we had a vegetarian at the table but everyone else benefited too). Finally there was a bomba (a rounded sponge cake with an ice cream filling) and cantucci (little dipping biscuits) which were served with vin santo, a favourite Tuscan way to finish a meal (apart from a glass of grappa, of course)

Apart from the sweet wine, the same wine, a Montecucco, was served right the way through the meal, along with copious quantities of San Pellegrino (sparkling mineral water). It was light and refreshing, not there in any way to attract attention on its own account, simply as an accompaniment to the food.

It is typically Tuscan for red wine to do duty for white in this way. They drink white occasionally but mainly with seafood and it is far more common to take a red right through the meal like this. (The following day we drank a Morellino di Scansano with a plate of linguine and prawns, for example).

If different wines are served, as they are if you visit a winemaker or a more expensive restaurant, they are likely to be different grades of red - a young, unoaked wine with the pasta and soup, a riserva with the meat and an older, more prized vintage with a second meat course or with the cheese. (Tuscans cheerfully ignore the ‘red wine doesn’t go with cheese’ theory - but they don’t go in for very strong, French-style washed rind cheeses or blues).

Even if they’re 13% ABV or over, traditional Tuscan reds, which are mainly based on Sangiovese, are much lighter in style than those from comparable growing areas. Their dryness and high levels of acidity can make them taste lean on their own but are the factors that make them work so well with the sort of dishes with which you would more commonly drink a white.

It’s noticeable that the more modern fruit-driven Tuscan reds such as those from the Maremma region don’t work so well with the simple flavours of the local food and can frequently overwhelm it. It accounts for the enduring popularity of basic Chianti despite the fact that it sometimes fails to justify its price tag.