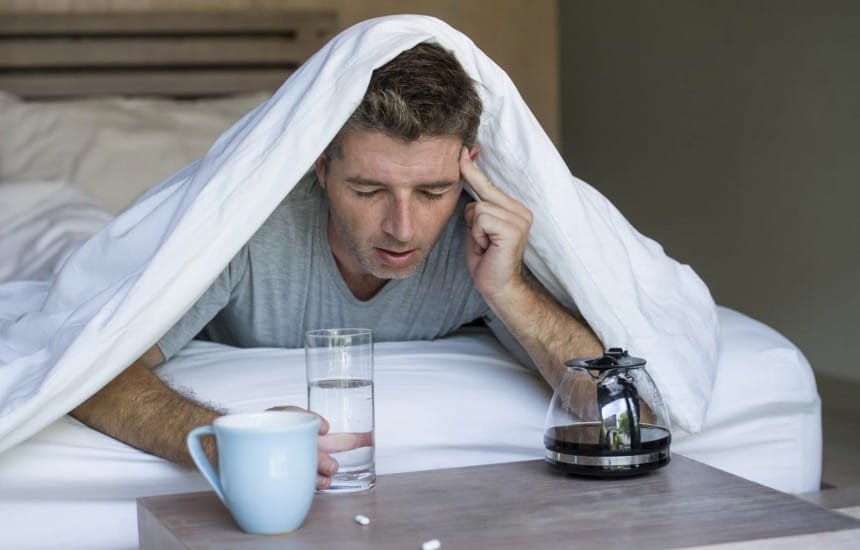 You open an eye, the ceiling wobbles. Your mouth, so dry. There’s no water to hand. You need a wee. The bathroom is way too far away. You sit up. Big mistake. Feel dizzy. A wave of nausea thwacks you. Saliva thickens in your mouth. You are sweating. You lie back down. Your heart is pounding. You roll over. Is that guilt you’re feeling? No wait, it’s indigestion. Urrgh. Too much thinking. You’re never drinking again.

Feels familiar? You may ask yourself, why does this always feel so bad?

Truth be told, if you don’t want to read to the end of this post, here are the abbreviated answers. We’re not too sure, we don’t really know and there’s no proven treatment. And strangely, given their frequency, they’ve received surprisingly little formal scientific enquiry.

And hangovers are common. There’s been a lack of large (and recent) epidemiological studies, though one Dutch study has shown 92% of the respondents were drinkers and 61% reported a monthly average of 2.7 hangovers. Another US study concluded 25% college students had experienced a hangover the previous week. 10% British men have reported having a hangover in the previous month.

Hangovers comprise a menacing array of symptoms including: stomach pain, nausea, vomiting, thirst, dry mouth, dizziness, fatigue, weakness, irritability, short-term memory problems, fast heart rate and headache. These start when blood alcohol concentration (BAC) approaches zero and will usually abate in 8-24 hours. But how often have these symptoms affected your everyday life, not to mention your ability to work productively?

The economic costs are hard to disentangle from the more general cost of alcohol, but through work absenteeism and reduced job performances the estimated cost of hangovers to the UK economy in 1987 was around £2 billion a year. More recently it has been estimated in the US, the annual opportunity costs of hangover at $2000 per working adult. Staggering stuff, really.

Why hangovers make you feel so bad

The stomach pain, nausea, and vomiting can probably be explained by the direct effect of alcohol on the gut. Alcohol irritates the lining of the stomach, delays the emptying of the stomach, relaxes the muscles at the bottom of the oesophagus (that’s the food pipe from the mouth to the stomach), allowing acid to regurgitate backwards, increasing stomach and pancreas secretions, and causing fat to accumulate in the liver.

Alcohol is also a potent diuretic (which means it increases the amount of urine produced) through inhibiting the production of a hormone called Anti Diuretic Hormone (or ADH). Consuming 50g alcohol (around 6 units) diluted in 250ml of water, causes elimination of 600-1000mL of water over several hours. There are probably additional mechanisms at work mucking around with the body’s salt (electrolytes) and acid balance which may, in part at least, explain the thirst, dry mouth and dizziness you experience. The severity of a hangover does somewhat correlate with the concentration of ADH. The good and bad news is that whilst hydration can reduce the severity of a hangover, it cannot cure it.

Glucose is the brain’s main form of energy. Alcohol prevents its production in the liver, which may account for some of the fatigue, weakness and mood disturbance you experience. And yet the body is actually rather good at regulating our blood sugar level, and there is usually a good supply of glucose in the liver. Normally one only sees true hypoglycaemica (low blood sugar) in alcohol-dependent persons who’ve been on a bender for several days, not eaten, and consequently exhausted their liver’s supply of glucose. It is uncommon to be truly hypoglycaemic after a big night out, and frustratingly, in two small studies, administration of glucose at the time of alcohol ingestion has not been shown to reduce the intensity of a hangover. Because of the ways alcohol interacts with sugars individuals with diabetes are especially vulnerable to alcohol-induced alternation in their blood sugar level.

How alcohol affects your sleep

Alcohol has numerous effects on sleep. The sedative effect induces sleep, but the sleep is usually of shorter duration and of reduced quality. Alcohol reduces the amount of dream sleep (called REM sleep) and increases deep-sleep. The balance between these states is really important for good quality sleep. Most boozing occurs in the evening and night and competes with normal sleep time, so further reducing the duration of sleep. It has been suggested that acute intoxication muddles with the body’s circadian rhythm (the sunlight-dependent natural 24 hour clock that regulates almost every automatic bodily function) therefore inducing a jet-lag-like state. Also, alcohol relaxes the back of the throat (which is why you may snore when you go to bed intoxicated), and the floppy back of the throat could block your airway, causing or worsening a condition called sleep apnoea. All of which culminates in understandable fatigue.

We are not too sure what causes headaches in hangovers. It may partially result from dehydration. Other explanations include alcohol-induced dilatation of the blood vessels in the brain (called vasodilation), alcohol’s effects on chemicals in the brain called neurotransmitters, or the ways alcohol interacts with our immune system. Who knows for sure?

We do know that alcohol is broken down in the liver to a product called acetaldehyde. When you give animals acetaldehyde or drugs to humans that makes acetaldehyde accumulate (the basis of a drug called disulfiram (or “Antabuse”), sometimes given to patients’ with alcohol addiction. It is also the reason you really mustn’t drink alcohol when taking the antibiotic metronidazole.), it causes flushing, nausea, vomiting, and fast pulse – effects not dissimilar to a hangover. Because of these similarities, it is attractive to think that small concentrations of the stuff may play a role in hangovers. However, acetaldehyde’s role remains frustratingly elusive since it is usually broken down quickly in the liver.

There is considerable individual difference in hangover severity so it seems likely that genetics plays an important role as well. More enigmatically, people who experience shame or guilt during a hangover may experience a worse one.

The role of congeners

When you drink alcohol (unless for some inexplicable reason you’ve chosen to drink pure alcohol) there are other biologically active compounds in the glass called congeners, which account for most of the drink’s smell and taste. Drinks will vary widely in congener content. It has been shown that alcohol low in congeners can lessen the severity of hangovers. Vodka usually has the lowest congener content, bourbon whiskey the highest.

The presence of congeners might explain the theory behind the hair of the dog. Methanol is a congener. Methanol and its breakdown products may cause some hangover symptoms. Alcohol inhibits the breakdown of methanol, so it can stay around in the body longer than one would normally expect. The morning after, as BAC has dropped, methanol is then broken down. Consuming more alcohol would once again inhibit methanol’s breakdown, delaying the effect methanol and its breakdown products may have. Personally I wouldn’t recommend it. Virgin Mary anyone?

So what’s the best way to prevent a hangover?

This may sound obvious, but hangover symptoms are much less likely to occur if you drink small non-intoxicating amounts of alcohol. If you do drink to excess the stronger the drink, the greater the chance of a hangover.

Drinking alcohol low in congeners (good news if you like gin, less good if you’re a fan of red wines) may reduce the severity.

Other things that have been shown to worsen hangovers include: lack of food, not enough sleep, increased physical activity whilst intoxicated, dehydration and poor physical health. It stands to reason that the opposites may improve hangovers. Avoid strenuous physical activity when drunk, try and be in general good-shape, drink plenty of water, and have some food with your drink.

As we have seen, alcohol has an effect on glucose, so it may be pragmatic to ingest some long-acting carbohydrates such as fruits and non-starchy vegetables, nuts, and minimally processed grains whist imbibing alcohol.

If you are unfortunate enough to experience a hangover, what’s the best way to cure it?

There are only a few randomized control trials (the standard to try and determine if an intervention is effective) looking at hangover cures. None have shown any clear benefit I’m afraid.

So what may help? Drinking lots of water. Perhaps a light easily digestible meal, if it doesn’t exacerbate the gastric effects of your hangover. If you can, sleep for longer.

If you are used to a coffee in the morning, going without may induce a caffeine withdrawal headache, and perhaps make the hangover headache worse. So it may be sensible to have one - if you are the morning-coffee type. Otherwise, it’s probably of no benefit.

As with tablets and supplements, there are no proven effective hangover meals. Despite the popularity of the Full English Breakfast as a cure, there is no systematic evidence it works. Pragmatically ingestion of fresh juice (which contains water, salts and fructose – a sugar) may help tackle to diuretic effects of last night’s alcohol. Eating other forms of long-acting carbohydrates, like oats, may be of some benefit given what we have seen of alcohol’s effect on the body’s sugars so a bowl of porridge might be beneficial.

Be careful if taking Ibuprofen or other anti-inflammatory medication. Whilst they may improve some hangover symptoms, they can cause stomach irritation and may well worsen your gastric symptoms. Paracetamol is also harmful in overdose to the liver. We have already seen alcohol has a direct damaging effect on the liver so I would caution the use of paracetamol, especially if you have a history of liver problems. (Then again, if you have a history of liver problems you should not be drinking alcohol, certainly not to excess). In small doses in usually well people, paracetamol may alleviate some of the symptoms.

I’m afraid, as with so much about hangovers, the paucity of studies means we move swiftly from evidence to opinion. So, for what it’s worth, this is what I would pragmatically recommend in a hangover situation, appreciating there is no clear evidence basis:

My advice in a nutshell

Whilst out of an evening drink plenty of water. (And I do mean plenty -- like 1 pint water for every 2 units of alcohol). Enjoy your alcohol with delicious food. When you get in, drink a pint of squash or water. Make sure there’s another by your bed. Take ranitidine (a drug that reduces the amount of acid in the stomach, it is available over the counter, sometimes branded as Zantac) before going out or before bed. When you wake up, drink more water, perhaps some tea and maybe 2 paracetamol. If your stomach can manage, try a light breakfast of juice, toast with honey, or porridge. Then go back to sleep. And sleep and sleep. Until you feel better.

Dr Jonathan Tricker is a practising GP. You may also find his piece on how much you should drink useful.