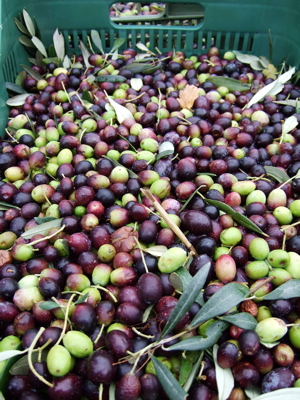 Bandino Lo Franco carefully lays some slices of rough Tuscan bread on a rack and places it on the glowing embers of an open fire. He toasts them each side, sprinkles each piece with salt, rubs over a garlic clove in one quick movement then pours a generous amount of deep green two day old oil over the toast. “Wait a few seconds” he urges. “Now eat!” It’s the most extraordinary oil, I’ve ever tasted - so intensely vivid and grassy I feel like I’m tasting olive oil for the first time.

Bendino and his brothers Gianni and Antonio run a 3316 acre (1342 hectare) estate in the south-east of Tuscany called Fattoria La Vialla. Olive oil is just one of the crops: they also produce wine, bread, biscuits, cheese and preserved vegetables, all of which are sold direct from the farm. It’s a model 21st century food business that combines labour intensive artisanal practices with state-of-the-art technology.

The olives, for example, are crushed on a traditional stone mill at a picturesque wooden farm building right at the top of the estate but next to the press is a sealed, temperature-controlled stainless steel mixer that reduces the olives to a paste, keeps them cool and protects them from air (oxidation being the number one enemy of top quality oil).

The unappealing brown coloured sludge that results would at one stage have passed to a press but again that has been superceded by two sealed tanks, one which separates the oil from the solids then a centrifugal unit which spins off the water from what has miraculously become vivid dark green oil. The final clear oil only emerges after a six to eight settling process where it is twice pumped off the solid residue that accumulates at the bottom of the storage containers. (The residue is used to rub the rind of the estate’s Pecorino cheese.)

It’s only comparatively recently that estates have had their own mills, a decision the boys father Piero farsightedly took back in 1985. The custom then was for farms who grew olives (practically every farm) to take them to a communal press in the nearest town but everyone’s olives went in the press at once and if the mill was busy they had to wait their turn which again risked oxidation. “Now we can press the same day the olives are picked” says Bandino.

The olive harvest takes place from the end of October to December, conveniently following on from the grape harvest. Although they run lab tests to determine the level of acidity in the olives they can tell when they’re ready to pick by the colour and feel - when green varieties start to turn black, how easily they pull off the stalk and whether they ‘give’ under pressure. (They need to be ripe but not too ripe to preserve the grassy flavour.) You certainly can’t determine the moment on taste. I pick one from a nearby tree and spit it out almost immediately. It’s mouth-puckeringly bitter.

Different varieties ripen at different rates but unlike grapes they are not picked separately. “Olive groves need to be mixed so that one variety can pollinate another” explains Bandino. The main varieties are Leccine (which makes up 50% of the La Vialla plantings), Frantoio, a variety that gives Tuscan olive oil its particularly aromatic taste, Raggiaie and Morelline though many of the farms they’ve taken on over the years have other varieties. “There are 66 in Tuscany alone and we’re constantly planting new ones.”

A new tree takes about six to seven years to establish, twice as long as a vine but can produce for hundreds of years. At La Vialla the average age of the trees is between 30 and 80 years. If you want to know why olive oil is so expensive it takes the produce of half a mature tree - 5-6 kilos - to make one litre of oil.

So why is Tuscany so good for olives? “They generally grow well in the same areas as vines, especially on south-facing slopes” says Bandino. “But we’re 400-500 metres above sea level here, which is about as high as you can go. Old men say the best olives come from the top of the hill!”

The estate is run on organic and biodynamic principles (again an innovation of Bandino and Antonio’s father who wanted to farm by traditional methods. “He worked alongside our grandfather in the vineyard. He never used any pesticides, or fertilisers and our father wanted to continue the same way” says Bandino. The roots of the tree are treated twice a year with a preparation of horn manure and the leaves sprayed with horn silica which are applied following the biodynamic sowing and planting calendar. The family prefer not to flaunt their biodynamic credentials as other factors come into play when deciding harvest date such as how hot the summer has been and how much rain there is during the picking period. “We can’t pick when the olives are wet.”

Although some of the olives are harvested by machine much of the harvest is still carried out the traditional way with pickers up ladders, pulling the olives off each branch with a small plastic rake. They fall onto a net underneath the tree then are transferred to boxes and taken straight up to the press.

The local workers are joined by a troupe of German visitors who come every year for the harvest - a motley cross-section which includes a singer, a TV producer and a nuclear engineer. Many have been several times - Fattoria La Vialla has a loyal following in Germany where the Lo Francos have been selling their produce direct since 1988.

After a light morning’s harvesting we all gather together round the kitchen table of La Lignana, the farm where the press has been installed. The new oil is freely poured on evey course - bruschetti, pasta and salad. “It’s healthy” Bendino assures us. “New oil contains 45% more polyphenols!” We’re only too happy to be convinced . . .

You can order La Vialla’s olive oil direct from the farm through the website www.la-vialla.com

How to taste olive oil
If you fancy yourself as a wine taster you should try evaluating olive oil. I was run through my paces by Bandino who is one of the members of the local olive oil assessment panel. First of all you have to establish whether the olive oil has any faults which can range from riscaldo (an oil that is fermenting) to the self explanatory rancido. If it is it immediately fails to classify as extra virgin olive oil (though that also depends on the level of acidity). Then it has to be marked for fruttata (fruit), amaro (bitterness) and piccante (spiciness). Tasters must further specify whether the fruit is verde (green) or matura (ripe) and what sort of flavour profile it has - erbe (grass) and carciofo (artichoke) being typical descriptors of Tuscan oil. The younger an oil is the more intense its characteristics are but I found it really hard to guage how grassy an oil was (marked on a scale of 1-10) - what I thought was bitter, Bandino called ‘spicy’.

We must have tasted about 10 (in small paper cups, without bread) and it’s quite tough on the palate. The oil is so viscous you can’t easily spit it out and the young oils, even while appealingly fragrant, can leave a bitingly bitter backtaste. To release the flavour you have to cradle the cup in your hand to warm the oil then tip it around and smell the aroma. “When you’re buying oil you want to avoid any bottle that has been kept under bright lights or which looks as if it has been there for a long time” warns Bandino. “Always keep your oil in the dark at an even temperature.”