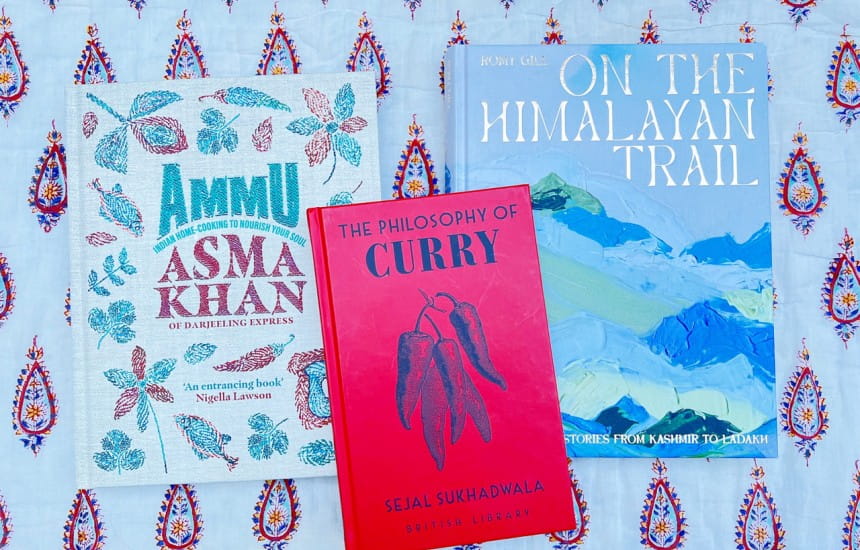 The British love affair with Indian food is longstanding but these three very personal books take our knowledge to another level. Ishita DasGupta takes a look at them.

March and April see the release of three books that give an interesting insight into Indian regional cookery. Ammu by Asma Khan is a tender memoir that contains a collection of recipes that range from the Bengali home kitchen to Mughlai showstoppers; On the Himalayan Trail by Romy Gill is a breathtaking journey through the Kashmir Valley and foothills of the Himalayas shining a light on a region whose food may be lesser known but has had huge influence upon India’s cuisine and culture, whilst The Philosophy of Curry by Sejal Sukhadwala is a whip-snap overview of the history of curry and its influence across the globe. Three very distinctive books, each offering a different facet to the subject of Indian food and culture. 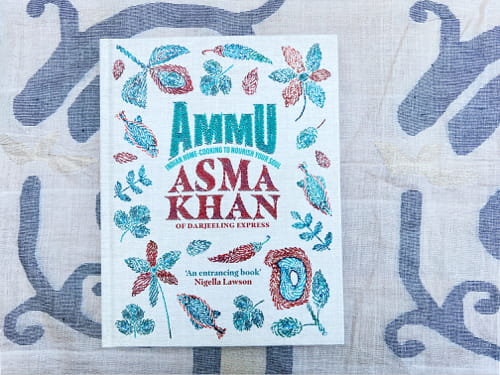 Ammu is the latest cookbook by the chef, author, and owner of Darjeeling Express, Asma Khan. Meaning mother, Ammu is a paean to Khan’s own mother, Faizana -the inspiration for her life and work. To simply call this book a cookbook, fails to describe fully what it really is about. Using the language of food, woven within these chapters is the story of two women and their journeys, through childhood, marriage, motherhood, and entrepreneurship.

This collection of recipes draws upon Khan’s Rajput and Bengali background with a mixture of everyday staples and dishes for celebrations and feasting. Quintessentially Bengali dishes such as bhortas -mashed or minced vegetables, fish, and meat, spiked with raw onion, green chilli, and mustard oil, and chorchoris -lightly spiced vegetables cooked in oil with no gravy, sit alongside Afghan chapli kabab, and Mughlai dishes such as korma, kofte, firni and of course, biryani.

Biryani is a specialty for both Khan and her Covent Garden based restaurant, where her Biryani Supper Clubs are much sought after events. The dish is cooked traditionally in a big pot or degh, sealed with dough and steamed dum style. Brought out with much fanfare and a great sense of occasion, the degh is opened in front of diners before the layers are gently mixed and served. For those wishing to recreate this biryani at home, a recipe for Ammu’s chicken biryani, scaled down to feed six, with step-by-step instructions is in the book.

In fact, there is something to satisfy everyone’s appetite and Khan’s recipe collection really showcases the many communities and cultures that have influenced Bengali food. It is a joy to dip in and out of its pages and to see dishes such as Malaikari, Calcutta Haka Chilli Chicken, and Zaffrani Raan make an appearance. In Khan’s own words: ‘This is food I cook for my family every day, meals to comfort, restore and nourish. I give these recipes to you, with love.’ 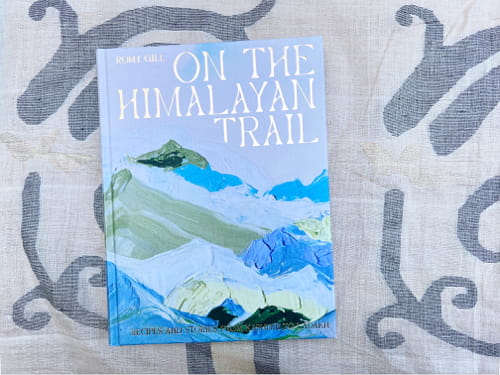 On the Himalayan Trail by chef, food writer, author and broadcaster, Romy Gill, is a sumptuous book that is part travelogue and part culinary exploration. Beginning in Kashmir, an area largely untouched by foreign and domestic tourism due its political situation, Gill gives us a glimpse into the region’s rich food culture and jaw-dropping landscape.

Kashmiri cuisine draws its heritage from the Pandit and Muslim communities with influences from Persia, Central Asia, and Afghanistan. Certain aromatic spices play a central role in many dishes, as well as ingredients local to the area such as dried Cockscomb flower, saffron and Kashmiri red chillies. In summer, the fertile land offers fresh greens and vegetables, but winters can be harsh, and scarcity of food means that families busy themselves during September and October drying vegetables and preserving fruits.

At the outset, Gill tells us about the many people who shared recipes and food with her, from her driver and guide to professional chefs and home cooks. She takes us to meet food producers and cultivators, café, and restaurant owners and also Waza - chefs who create the famed wazwan, or Kashmiri celebration feasts, which can comprise of up to thirty-six courses. Through them we learn not only about food, but the history and culture of the valley.

From here, a journey to the high-altitude desert of Ladakh where Gill explores its biggest township, Leh. There is a marked change in the food here, heavily influenced by Tibetan cuisine. Thukpa, a noodle soup, and whole wheat pastas such as Skyu and Chutagi are served in vegetable laden broths. Momos, steamed buns, fermented wheat breads and Gur Gur Cha -salted butter tea are iterations of foods that connect communities that live amongst the foothills of the Himalayas.

The book has a lovely range of recipes from quick, everyday meals, pickles, and preserves, to dishes for an unrushed weekend or celebration. Nearly all the spices are readily available here, and Gill has adjusted recipes to suit the UK home kitchen. For those who love food and travel, this gem of a book is a must. 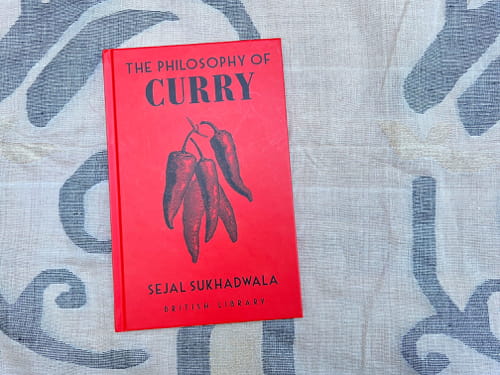 The Philosophy of Curry by London based food writer, Sejal Sukhadwala, is part of a series of books published by the British Library, with a focus on food and drink. In this volume, Sukhadwala attempts to give a definition for the somewhat contentious term curry, tracing its origins, its arrival in Britain and influence across the globe.

Associated with the British, the word curry is thought to be a modification of caril, used by the Portuguese in Goa during the 16th century. This in turn is thought to be an adaptation of kari, used variously to describe black pepper, spices, or a spiced accompaniment to rice, in Tamil. From here Sukhadwala tries to determine what curry is, exploring the long history of the dish and also the valid objections which surround it.

There are some interesting chapters such as the one devoted to curry powder. The earliest recorded being sold by a perfumery warehouse in Piccadilly in 1784. Powders were thought best to ensure consistency of taste, in comparison to grinding one’s own spices. The flavour profiles vaguely based on regional dishes from Madras, Bengal and Bombay.

The spread of curry around the globe is also a fascinating story. Led mainly by Indian indentured labourers, who were shipped across the British Empire to work in various plantations following the abolition of slavery. Modifying their recipes to use local ingredients, many Indian influenced dishes, now absorbed into each country’s food identity were born.

It is impossible to go into too much detail on such a vast subject across a hundred pages, but Sukhadwala does a great job, whetting the appetite and giving a list for those interested in further reading. The writing here is accessible and engaging, and Sukhadwala is not at all precious about her subject. I devoured this book in one evening and hope that Sukhadwala plans to write more on the subject.

Ishita DasGupta is based in Bristol. She is a home cook who writes about food and culture, migration and identity. 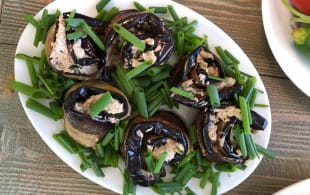 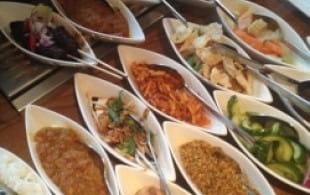