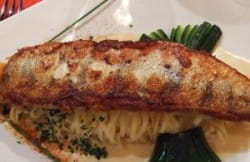 It’s hard to pick out the best match from my trip to Alsace last week but I think it has to go to this classic combination you find in every traditional restaurant.