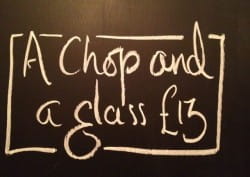 From the outside, the re-opened Quality Chop House in Farringdon may look like yet another retro restaurant revival but the big draw is the wine list put together by its well-connected young proprietors.