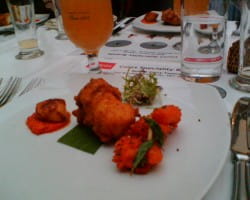 Coincidentally I have had invitations to two Indian dinners in two weeks - one accompanied by beer and one with wine which makes for some interesting comparisons.