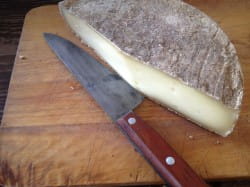 Having spent a few days in the Auvergne recently and eaten more than my fair share of Saint Nectaire cheese with a variety of wines, mostly natural, here’s what I think works best.